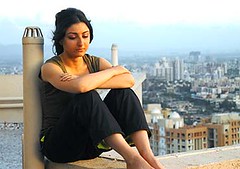 It’s a dark look at human nature with a hint of hope that humans need. Awesome portrayal of detailed characters. Unfortunately, pace is slow enough to make it tiresome by the end.

Wherever in the world I’ve lived in the last 12 or so years, I have proudly called myself a Bombayite/Mumbaikar at heart. The city has an indescribable energy that sweeps me with it whenever I’m there. Mumbai Meri Jaan, however, is about various characters who don’t necessarily have such a romanticized view of Mumbai. Each of them goes through a phase of cynicism and ultimately accepts their situation as is and joins the “spirit” of the city.

It’s a study of characters. Each character is interesting, even if not completely convincing. The combination of characters chosen is fascinating. The resistance to have extreme characters is obvious. Instead, a shade of gray is picked for each one and the variation in the grays, once in a while, defies believability.

Yeah, it is also one possible interpretation of what might have been the state of mind of the citizens after the bomb blasts on July 11th, 2006. But, that seems secondary. The bomb blasts could very well have been replaced by any other traumatic event that Mumbai has gone through in the past few years. The focus is more on the social commentary on the economic disparity that the city suffers from, the corporatization of private lives by the media, the two sides of the youth wanting to migrate abroad, and so on.

Like the city, Mumbai Meri Jaan is more about the people that make it what it is. Even the bit roles give you a glimpse into yet another character you might find in a city - spoilt rich brats, a sermonizing father, housewives for whom the bomb blasts must have just meant another event, and many more. The main characters, of course, have been dealt with in much more details.

Nikhil, an idealist who pays his taxes, refuses to drain the country of it’s brain, considers changing his whole life around to deal with the trauma that the blasts bring about. R. Madhavan’s demure yet sure personality smoothly transforms into the troubled, paranoid Mumbaikar. Rupali, the most regular brand of TV reporter, refuses to believe that she’s not exclusive. You see Soha Ali Khan turn into a zombie from the confident, aspirational lady she starts out as.

Thomas is a good-hearted slum-dweller whose favorite pass-time is to silently observe the rich and their ways. Irrfan Khan with minimal dialogue manages to convince us of his need to avenge the rich and the self-imposed redemption thereafter. Suresh, a racist, makes everything he sees fit into his conspiracy theory. What more can such a person need to substantiate his argument than an act of terrorism? Suresh’s transformation seems the laziest cop-out but Kay Kay Menon, like always, gives the character the body language and attitude that it demands.

Tukaram Patil, at the end of his working life as a police officer, symbolizes the impotency of the police department. This clichéd character is one of the weakest ones. Paresh Rawal brings his amazing timing to the mostly well-crafted dialogues. His performance can certainly not be blamed for the character’s transition from a “go with the flow” attitude to giving “have better aims, do better with your life” sermons to his juniors. Any which way, one of the main purposes of the character seemed to be to thread the other characters together. The final speech that he gives seemed rather contrived, especially because the connection was not really necessary. Otherwise, the dialogues for all characters are charming because of their ruggedness.

You know what all this character development means, right? More run-time. And that is Mumbai Meri Jaan’s biggest drawback, even to a patient viewer like me. The climax is one of the most subtle, yet strongest ones I’ve seen in Hindi cinema in recent times. Only the story tellers have taken 20-25 minutes too many to get there. I wonder how much more compelling the climax would’ve been if it had come earlier, before the audience had time to get bored.

Albeit tongue-in-cheek and supremely clever, there’s an undercurrent of sarcasm running through the movie. This sarcasm points a big fat finger at the indifference of people towards others’ trauma. Now, taking a cue from the title, these people are from Mumbai. Sure, the climax serves as consolation for all the digs taken on Bombayites and ultimately it balances the tables. But, the effort to make it as unbiased as possible is unmistakable. And for that, despite being in love with Mumbai, I respect the story’s comment on its residents.

A few days in the life of a city which has gone through a traumatic experience.

Meetu finds parallels between her own love for Mumbai and the characters in Mumbai Meri Jaan. Whereever in the world she has lived for the last 12 years, she has always called herself a Mumbaikar. The characters in the movie don't have such a romantic...

To start-off let me just first tell you that a movie could possibly have a good cinematography, nice story, and even a few good dialogues accompanied with a pleasingly nice backdrop as standalone; but it’s really rare to have them all at one place and tickling that good movie chemical reaction in a bollywood style…yup that’s really rare…but amidst all oddities a small gang of actors made our lethargic, numb, dead soul fire on ire to become belligerent against serial bomb blasts.

I cannot withhold myself but praise the actors you name any, say it Paresh Rawal, Menon, Irfan, Madhavan or Soha or even seemingly oblivious Vijay Maurya. One could really admire the depth the director has in the understanding of the human emotions. it wasn’t just someone crying beating his chest but even the subtle emotions were very precariously handled. This movie really gave us a break from the series of routine sleazy flicks. This is more of a documentary just because it contains some heavy, serious issues or else it contains all of the enigmatic charm of a great movie.

But the real worthy candidate worth praise is definitely the writer who brings forth to us different characters from downtrodden to well-off, from utopian school of thought to the bohemian, from police to media; and the series of events and psychological changes which gets kick started as aftermath of these crisis. The only scope of improvement was that the actual bomb blast could have been more visual but perhaps that too was done deliberately as the theme of the movie was to show not the obvious but the emotions and cries which other wise would have unheard-of. Again Paresh truly enthralled us with complex blend of deep thoughts amalgamated in humour and the way he passed on the messages of witholding the inter-religious confronts and to take onto the hardships of life to do something worthwhile before dying.

This movie surely could if not “would”, amass amazing amount of moolah but if it fails then it’s surely to blame onto the lack of publicity and not the movie making. Hands-off from my side to the team.

True Mayur, and yet, unless we demand more, how will the makers know that we need more details...

Thanks Rohan, for penning your thoughts down.

Harpreet, that's the thing, I didnt like it as much as the other movies you have mentioned.

Rahul, do let us know what you thought of it!

Overall I liked meetu's review of the movie but I felt she is mistaken about a couple of important points.I recently watched the movie on DVD and I thought it is a classic case of an Indian director thinking the Desi audience is not sophisticated enough for an intelligent treatment of such a promising subject. Lets take the tracks one by one.
Kay Kay Menon. If there is one Indian actor who I think gives a 110% to each role, it is him. the director had such a potent premise, such a versatile actor and also the opportunity to make KK flex evey artistic muscle to make this track an outstanding one.What does he gives us instead ? A two dimensional, caricatured, cliched character. Here was the chance and the setup to do what Matt Dilon did in hollywood movie "Crash". For god's sake stop belaboring the point, be a little subtle, we will get the message, we promise.Instead he Makes KK run behind the Muslims the whole time like a dog behind a postman and suddenly at the end there is a revelation and he is a reformed man ! More textured storytelling anyone? a It is a different matter that KK salvages the director's Faux Pas and invests the character with a believability and comes across as a conflicted soul who is fighting inner demons.
As fas as Soha Ali Khan's acting skills ( or the lack thereof) is concerned, I was always a fence sitter but now she seems to be proving what my instincts were always telling. She spends the whole movie in a cry more / cry less mode and suddenly at the end she become ok ! I am amazed the TV reporters union did not take umbrage at her portrayal of them.
Irphan is over-the-top-ish, I don't know whether this was his artistic choice or the director's brief, but at least the movie in consistently in being unsubtle and in-your-face.
Paresh Rawal agreement to do such a cliched role speaks volume about the kind of roles available in the industry.
Madhavan's role was the one pleasant surprise. Not only has he done justice to part, the director seemed at his creative best during this track.The scooter scene depicts his paranoia very well and the gas cylinder blow scene conveys nicely how he is having thought of mortality all the time. His behaviour at home and how acts with his wife gives us very clear insights into his state of mind at that moment. I only wish the cliched setup at the end where he has to ride a local train during his wife's delivery could have been avoided.
Overall, I kept reaching for the FF button on the remote and some judicious editing could have redeemed the movie somewhat.
When people talk of "dumbing down" of our cinema, this is the classic example to put forward.