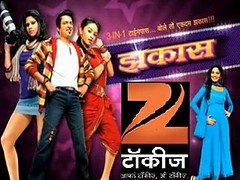 wogma rating: Watch if you have nothing better to do (?) - or if you don’t mind some ‘time pass’

Ankush Choudhary is clearly a man in love with himself. In addition to being the lead actor of Zhakaas, he has also directed the film. So he gets to walk multiple times in slow motion towards the camera (Ray Bans in tow), leap to super human heights and stay there long enough to wink at the audience, and in general make himself feel slightly more important than he actually is. Last seen in the disastrous Pratibimb, he has the aura of someone that you really cannot take too seriously.

Perhaps that has helped Zhakaas in some measure, because inane as it is, I still came away feeling mildly amused. The prime reason for this is the fact that the film really doesn’t take itself too seriously. It promises entertainment and if the reaction of my co-audience in the theatre is anything to go by, it manages to deliver that in some measure.

The plot itself is as ludicrous as can be. Right in the initial reels, it is revealed that Ankush’s character leads a triple life, with three different girls. A series of gags then go on to explain the Five Ws and One H of this situation. Needless to say, logic and anything that might appear close to it in a thesaurus take a backseat in this flick.

The performances in this film add some measure of school-boyish charm to the ridiculous goings-on. Ankush himself is surprisingly endearing, because he invests himself completely into his part, or should I say, parts. Of the three girls, Sai Tamhankar as the spunky photographer Neha succeeds in sprinkling some believability into her part. She manages to emote well for the most, with the occasional tendency to go over the top. But then, in this film, who doesn’t? Pooja Sawant as the innocent head of an ad agency is pleasant. Amruta Khanvilkar looks marvelous as the Kolhapuri bombshell, but is completely miscast vis-à-vis her performance.

The guys who come across as the true winners though, are Jeetendra Joshi, Pushkar Shrotri and Vikas Samudre as the three lovers who are denied their lady loves by the cool stud (?)Ankush. Each of their characters has unique quirks that seem pointless, but add a flavour to the comedy. They are involved in a series of madcap jokes and set-pieces that are delivered so convincingly by them, that you are willing to forgive their downright stupidity.

Technically, the film has nothing to boast of. Colourful in its feel, it still leaves a lot to be desired in terms of production value. Also, though this might be a problem with the projection at the theatre where I watched this, it seemed that the framing at times was simply careless, with characters’ heads getting cut off for no apparent reason. The music of the film is purely functional. The fact that a couple of the songs have Hindi lyrics, however, is truly disappointing. It is hard to see a point in making a Marathi film that has Hindi songs.

Ultimately, what manages to ensure that this film isn’t a complete waste is the fact that, quite like Priyadarshan’s Malayalam films of yore, a number of the jokes are such that they wouldn’t have been that funny in any other language. For that reason alone, I afforded a smile once the film was done.