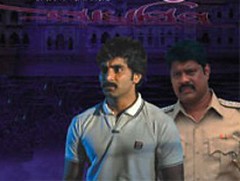 wogma rating: Watch if you have nothing better to do (?) - (Like watching paint dry.)

Those expecting Pratibimb to keep up the good work done in the recent past by Marathi filmmakers are going to be sorely disappointed. It is a confused film that is written and executed in the most amateurish manner. The film has absolutely nothing going for it, apart from the fact that it keeps the audience guessing right till the end. A few character performances are competent, but nothing that can help lift the film. The generous dose of stereotypical horror elements don’t contribute to the film in any way. Pratibimb is a film that just doesn’t need to be watched.

The growth that Marathi cinema has seen over the last few years truly warms my heart. What sets it apart is the fact that there is an inherent honesty in the cinema. Marathi films more often that not capture a certain flavor of life as a Maharashtrian – be it in a rural setting like in Deool or with an urban backdrop like in Hello Jai Hind. I feel delighted when I think of the fact that there is a new Marathi film to watch every week.

This week, I had three new releases to choose from. So, when I read, ‘Pratibimb is a story that revolves around a newly married couple…’ I felt that I didn’t need to read further. I had made my choice. What followed was one of the instances in life where one needs to insert a ‘note to self’.

Pratibimb turned out to be a shockingly amateurish film that was confused about what genre it wanted to belong to, what it really wanted to do to the audience, and in general, what was the point it was trying to make. Any hopes of the aforementioned honesty were dashed in the first five minutes itself, following a poorly performed and executed item song starring Sonali Kulkarni in clothes that reminded one of what Kajol wore in the first half of Kuch Kuch Hota Hai, only cheaper.

After the said newly married couple get newly married, the newly married wife gets the shock of her life when she discovers that her newly married husband isn’t newly married after all – he was married earlier. And what blows the wind out of her windpipe is the fact his first wife, now dead, was an exact replica of her. All of this is revealed in the first ten minutes of the film itself. What follows is a part-horror, part-crime but mostly silly story with inane twists and turns that would make Abbas and Mustan puff their chests up in pride.

The film wears an extremely dated look and is very poorly cut. There were times when I was astounded over just how poor the technical aspects of the film were and how such a sub-standard product saw a release in the first place. Now I am not one to hanker over technique when there is an interesting story to tell. The main problem with this film is that the story is so ridiculous that it makes Ready look like Mughal-E-Azam. Touching upon issues like screenplay, characterization and narrative structure, then, would be akin to explaining the nuances of cricket to a Texan.

To be fair, the second half of the film had me hooked. I was very eager to know exactly what the inane-ness was leading to. I was, quite literally, on the edge of my seat. A part of me, the unabashed cinema lover, was hoping that the climax of the film would make up for the preceding nonsense, that it would make me sit up straight and say, ‘You were trying to make a thriller? Well, I did get thrilled.’ Again, note to self.

The climax of the film, the reason for why all of the supposed spooky-creepy stuff was happening earlier, is such an insult to one’s intelligence that all I wanted after the film was green tea and Casablanca. In other words, I really needed to flush my conscious and sub-conscious.

For the actors, there is really nothing much to say. Sonali Kulkarni tries hard but fails. Ankush Choudhary is saddled with the worst role in the film, and there is a strange poetic justice in the way he performs it. Ganesh Yadav, known mainly for his character roles in a number of Hindi films based on the underworld, is competent. So is Ravindra Mankani, a fine actor. The rest of them are, well, there.

Bluntly put, Pratibimb was so disappointing that it resulted in what you have read on this page so far. Go figure.

Horror elements are present, so yes. Then again, the parents may need guidance as well.