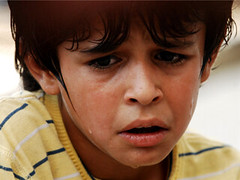 The Song of Sparrows

Perhaps the last Majid Majidi film to have found international acclaim, The Song of Sparrows is an Iranian treasure. Ostriches, goldfish, kids, Reza Naji and the wonderful people of Iran. Fans of Majidi’s works will know it’s a typical formula - a character in dilemma to fulfill a purpose. But it’s the journey where Majidi spins magic. It’s a genuine mood lifter, highly deserving of repeat viewing. Winner of Best Actor at the Berlin International Film Festival (2008) and nominated for Golden Berlin Bear.

Majid Majidi’s universe is full of do-gooders. It’s where you can trust people with your money. No matter how economically challenged you are, you’re always kind to share your meal with a guest. Customers at a shop don’t whisk away extra-change you may have handed over by mistake. People are extremely hospitable, welcoming and innocent. Crime, murders are unheard of. People tell lies, but for a larger good. There are no human villians in his films. If any, the enemy is a product of circumstances - often intangible, something the protagonist must overcome.

That’s exactly the context of The Song of Sparrows. Karim (Reza Naji) who works at an ostrich farm on the outskirts of Tehran, wants to loan some money from his boss, so that he can buy a hearing aid for his daughter since the one she used to wear has stopped working after it fell in a dirty cesspool. Poor Karim faces an uphill task to generate that money, after he gets fired from his job thanks to a moment of carelessness that leads an ostrich to escape from the farm.

The Song of Sparrows captures Karim’s loss of innocence as he frequents the city every day posing as a motorbike pilot who ferries people and heavy goods. Although he earns well by doing this, every piece of city scrap he begins to accumulate in his backyard becomes a symbol of the degradation of the generous and good-hearted Karim he was once known for.

It’s a fantastic message, told most beautifully through simple vignettes - Karim’s refusal to part with a beautiful blue door his wife donated to the neighbours, his violent outrage when he spots his children selling roses on the highway - all these become signs of a Karim who is now as acid tongued as the grime his face accumulates driving around the city all day. Through Karim’s character, Majidi’s not saying that life in the city is bad; he’s just saying that people change when they spend a lot of time in an urban setup. It’s a universal truth, isn’t it? Something snaps inside Karim in this daily grind to the city. He loses something that his family and friends treasured about him. The film’s plot is about how he regains his old self, under pressure from circumstances and a little help from his family.

Visually, this is one of Majidi’s most arresting films - so arresting, you can almost smell the Irani soil. The first 15 minutes of the film are pure eye candy where lensman Tooraj Mansuri’s camera captures the grace of an ostrich run and the aburdity of a chase, against the dry landscape. They are my most lasting impressions of the film. The close-ups of Karim’s face throughout the course of the film are important - you discover that Reza Naji is so good, just a tweak of his cheek muscles is worth a thousand emotions stirred up inside him.

Majidi’s films always have a hidden relationship with water. It’s also a case in The Song of Sparrows, except he adds another regular from his films - goldfish. Part of the film’s official poster, a scene involving the transportation of hundreds of goldfish, is the most moving sequences in the film, shot with Majidi’s characteristic slow-motion. I found myself in tears by the end of it.

I’ve seen almost all of Majidi’s internationally acclaimed films so far - Children of Heaven, The Colour of Paradise, Pedar, Baran. This film is the latest addition. As it got over and I settled down to mull over the film, I found myself asking one question: Does Majidi’s universe really exist? Are Persians genuinely as good as Majidi portrays them to be? Interestingly, while I may not be sure about answers to those questions, I’m at least convinced about one thing - we always manage to sympathise with the protagonists of his films. Perhaps that’s why people all over the world love his films. Perhaps that’s why they’re acclaimed by both critics and audiences globally - a feat sometimes very difficult to achieve. Perhaps that’s why they call him Magic Majidi.