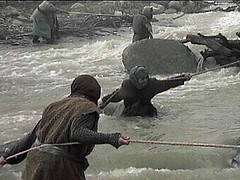 What happens when 17-year old Lateef is drawn to Rahmat, a young boy who joins the construction site where they work and discovers his secret? That’s Baran for you, acclaimed Irani film-maker Majid Majidi’s most well-known dash at romance. It’s beautiful, restrained, subtle at its high points and touches you with the delicate comfort of a bird feather. Highly recommended viewing.

I’m a fan of subtlety. I like gestures which say a lot without a word being exchanged. Where you-say-it-best-when-you-say-nothing-at-all. I love the sound that silence brings with it. Which is why, I think I liked Majid Majidi’s Baran.

The film is a romance that is an accomplishment in exercising restraint, where the bond between the two young characters in question, is never explicitly declared. You never know if its love, or infatuation, or just sympathy, a longing, or curiosity to engage with each other in a country where men and women can never be ‘friends’. Where, if the two characters had Facebook accounts, their relationship statuses would read: “It’s complicated beyond the understanding of Zuckerberg’s algorithm.”

And the complications are simple to understand. At a construction site in Tehran, 17-year, chiselled face Lateef is as hot-tempered as the tea he prepares for the workers. He picks up a fight at the drop of a hat, but his life takes a turn in unimaginable ways when his Afghan co-worker gets injured and sends his young son Rahmat, as a replacement.

This is Majidi gold, to be honest, part of an envious roster he churned out in his career - Children of Heaven, Pedar, Colours of Paradise, The Song of Sparrows. Unlike these films, Baran doesn’t exactly tug at your heartstrings or make you cry. Instead, it leaves you pondering about the lengths to which man’s behaviour is influenced in the presence of a woman. Especially a woman he feels an attraction for.

Young actor Hussain Abedini plays that young man to perfection and the camera captures his transformation from ‘angry youngster to samaritan’ beautifully. Majidi’s focus on the goodness of human beings continues in this film as well. The villians (as expected, considering the sanctions on Majidi’s work in Iran) are the government officials, who are clamping down on the employment of Afghani refugees in Iran. Mohd. Aamir Naji, a Majidi regular, is able to bring to life the desperation of the construction site boss, Memar. He is a do-gooder, employing the needy Afghans, bailing out Lateef in times of crisis and when he loses his temper, his agony is understandable.

The characters are fleshed out well, as is the mystery around Rahmat (Zahra Bahrami, in her only film appearance). With puffy, emotive eyes, Rahmat is the big surprise that the film offers and Majidi’s unveiling of that surprise is one of the most beautifully filmed scenes in the film.

Beauty, in fact, is something Majidi is consistent with. For example, his fascination with pigeons to illustrate a frame. He also continues his obsession with water, as you will discover by the end of this film. In a way, water has been therapeutic to his work. What cannot be judged by man, is judged by the calm or fluidity of water.

Despite being a slow film - the last 30 minutes are a bit of a struggle - it does well to capture every man’s reality: it takes a woman to make us good human beings. A mother from birth, and a wife in adulthood. Lateef doesn’t have any of them - which possibly explains his meandering ways - but when faced with a woman in his life, he does come around to changing himself.

The closing shot of this film figures in my top 10 closing shots in films. Incidentally, Majidi’s other films also figure in that list. He’s clearly a master finisher. He keeps things abstract, in a way that you go home feeling comfortable with his verdict.

Baran is a romance like none other. The lovers never even come close to touching each other, or brushing fingers, for that matter. But in such restraint, lies the magic of it all. They don’t call it ‘Majidi magic’ for no reason.

Yay! Thumbs Up, by Makarand

So-So, by Lyricswale.com : This is the best site for all songs lyrics