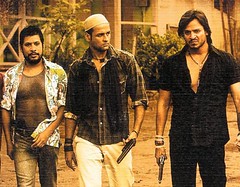 Last night while watching Shootout at Lokhandwala (SAL) I was beaming with joy, gloating in a pool of pride and all this not because I am proud of Apoorva Lakhia’s directorial skills but because I was spot on with my prediction. Yes people, Shootout at Lokhandwala is a complete bukwass philum. I really feel sorry for all those who expected this gangster rap to be rocking, but yaar if you mix 5 star class pasta with roadside vada paav you would only end up with beswadi khichadi.

And that’s exactly what SAL is, neither a classy commercial film nor a gut-retching reality flick. All you do the entire 2 hours 15 minutes is wait for this torture to get over because you can't even afford to walk off after shelling out 250 Rupees behind this miserable effort.

But not to worry too much, if you have already bought the tickets and have yet to see it, here are some noteworthy aspects (and thank God for that).

Now moving on to my bitchy side, here are just some of points (and a few advices) that make this film a thakela watch.

As you can see from the above, I could go on and on and on but I won’t.

Instead I shall leave you with the most apt one-liner exhaled by some dude, once the credit titles were up - "Gupta, Kya F***all Picture Hai".

This review is by guest reviewer Saakshi O. Juneja. Saakshi O. Juneja is an active blogger, fanatic Bollywood watcher, feminist and overboard dog lover. Currently working as a Business Development Manager for a sportswear manufacturing company in Mumbai, India. Did graduation in Marketing & Advertising from Sydney, Australia. As far as blogging is concerned...is a complete Blog-a-holic. Saakshi O. Juneja also blogs at http://sakshijuneja.com/blog.

Thumbs up, by Rachel Fernandes, Bollywood Mantra : ...The script is kept simple but the screenplay is hard hitting and even the finale which includes the actual real life shootout is incredulous and gives maximum impact. The climax is worthy and enthralls audiences towards the end of the film... Apoorva Lakhia’s execution is forceful and effective too.... full review

Thumbs up, by Namrata Iyengar, Deccan Herald : ...Shootout at Lokhandwala is real, hard-hitting and will catch you by surprise. And kudos go to director Apoorva Lakhia for that.... full review

Thumbs up, by Martin D'souza, Glamsham.com : ...As the lights are dimmed and the movie begins, there is pin-drop silence. Everyone is glued to the screen as what unfolds for the next two hours keeps the viewer frozen to his seat in numb disbelief.... full review

Thumbs up, by Debatru De, India Target : ...‘Shootout At Lokhandwala’ explores the personal obsessions and sacrifices of the 2 protagonists with absorbing insight, with some of the most riveting action sequences to be ever filmed.... full review

Thumbs up, indya.com : ...Apoorva Lakhia just falls short of making a brilliant film. With a subject like this and various possibilities to explore, he starts off well but then loses focus mid way by concentrating on item numbers and monotonous shootout sequences. However, he redeems himself in the last 30 minutes.... full review

Thumbs up, by Sarita Tanwar, MiD DAY : ...Shootout transports you back to the time when Mumbai was ruled by the mob. Lakhia’s film is a perfect tribute to those days of uncertainty. Awfully disturbing but recommended for every Mumbaikar.... full review

Thumbs up, by Manas Mishra, MovieWalah : ...Director Apoorva Lakhia excels in telling the story from the perspective of gangsters as well as the cops. He has used a series of flashbacks. His treatment & smooth style make this a stimulating and tightly made movie.... full review

Thumbs up, musicNmovies.info : ...The movie is completely fast paced, without any speed breaker. Even music compliments the scenes adding intensity in this fast paced movie... the story seems to have been adapted to make the story much more thrilling and entertaining instead of leaving it as mere documentary.... full review

Thumbs up, by Anupama Chopra, NDTV : ...So we aren't seeking truth here but a visceral movie experience. Happily Lakhia and Gupta deliver that.... full review

Thumbs up, by Ashok Nayak, Now Running.com : ...Positives: The raw and crude handling of the movie by the director is fantastic. The background scores where good.... full review

Thumbs up, by Akshay Shah, Planet Bollywood : ...s mentioned the movie has its fair share of flaws and is by no means a “perfect” film or even a “great” one. Those expecting a hard-hitting docu-drama like BLACK FRIDAY will be thoroughly disappointed. However the movie is a rip-roaring action film which delivers more than enough bangs for your bucks for action-buffs.... full review

Thumbs up, by Hanumant Bhansali, Radio Sargam : ...Apoorva Lakhia treats the subject exactly the way it had to be, though some of the finest actors of the film industry are wasted in terms of performance scope. The film is well crafted and will interest the viewers in parts. The climax is rocking and holds you on the edge of your seat.... full review

Thumbs up, by Subhash K Jha, SantaBanta.com : ...The constantly-charged adrenaline-driven narrative moves across gullies and roads with a ricocheting effect. The ear-splitting soundtrack reverberates with sounds of guns and ganas. The item songs in the beer bar are a rude reminder of how much the original true-life material needed to be re-worked for it to be audience-friendly.... full review

Thumbs up, by Pankaj Shukla, SmasHits.com : ...Apoorva Lakhia's winning ace for the film is his script; except for some songs thrown in between without any reason, the film moves on with a good pace.... full review

Thumbs up, by Nikhat Kazmi, Times of India : ...Director Apoorva Lakhia succeeds in giving Bollywood its first real desi Tarantino where the reservoir dogs truly have their day.... full review

So-So, by Sanjay Ram, Business of Cinema : ...Imagine taking characters from real life, adding a bunch of fictionalized ones and throwing in some song and dance. What you get as a result of this mixture is a film that somewhere on lines of being different, has commercial elements packed to the brim and turns out to be a sober ride.... full review

So-So, by Taran Adarsh, IndiaFM : ...That SHOOTOUT AT LOKHANDWALA is raw and crude would be an understatement. The subject demands that kind of a treatment and director Apoorva Lakhia executes it accordingly. The film is interesting in parts, but the best is reserved for the finale.... full review

So-So, by Vaibhav Wankhede, M TV : ...This utterly filmi account of a true story doesn't offer anythig new.. The same old gangster and cop story...Bollywood at it's cheesiest but still the film makes for a tolerable viewing.... full review

So-So, Movie Talkies : ...It's somewhere in the telling of the story that the film loses its punch. So even though he has managed to assemble a great cast ... he fails to capitalize on it.... full review

So-So, by Naomi Datta, Times Now : ...But if you are looking for some action, and we mean literally, this weekend you could risk Shootout...If you don’t expect a nuanced, complex film you will do just fine with this one. And the good news is that it gets over fast!... full review

Thumbs down, by Baradwaj Rangan, Blogical Conclusion, The New Sunday Express : ...So I guess your tolerance for Shootout would depend on how long you can watch people firing at one another in a slick – yet utterly impersonal – manner.... full review

Thumbs down, by Deepa Gahlot, Cybernoon: ...The problem is that this cop-and-gangster face-off has been dealt with, in so many fictitious films that there is no thrill or novelty in the true story. It's just seeing more scenes of gangsters running down narrow lanes and being shot... full review

Thumbs down, by Rajeev Masand, IBN Live : ...There's absolutely nothing new about Shootout At Lokhandwala , you've seen it all before and many times over. Not a patch on such cutting-edge gangster films as Satya, Company or more recently Black Friday, the problem with Apurva Lakhia's Shootout At Lokhandwala is that it doesn't quite know which direction its going in.... full review

THESE FILM CRITICS ARE ALL JUNKS. THEY DON'T APPRECIATE THE DIRECTOR'S, PRODUCER'S. AND THE
ACTORS' WORK. THEY ARE ALL TRYING TO FIND FAULTS. THEIR LIFE ITSELF IS A CRITIC. I GUESS
CRITICSM WILL LEAD THESE GUYS TO SUCH HEIGHTS THAT THEY THEMSELVES MAY CRITICISE THEIR STUPID
FACES ON LOOKING AT THE MIRROR. SHAME ON YOU GUYS." CHULLU BHAR PANI MEIN DOOB JAO." I ALWAYS
COOPERATE AND APPRECIATE FILMS WITH A DIFFERENT TWIST. GOOD LUCK FOR FORTHCOMING FILMS