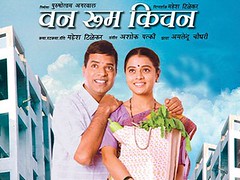 One Room Kitchen, written and directed by Mahesh Tilekar, is an earnest film that is worth a watch, even if it is only for the interesting gamut of characters, their endearing interactions with each other, and some competent performances. The flavor of life in a chawl is captured with sincerity, and the dialogue will make you smile more often than not. So, in spite of the conveniently tied up climax, some obvious stereotypes and lack of technical finesse, One Room Kitchen is a film that can really be enjoyed with family.

The story, the setting, the technique, everything is as simple as can be. However, what the characters work, their dialogue, their relationships with each other and the sheer fact that even the nicest of them have those rough edges that make them seem real.

The story primarily revolves around a young couple, Ravi and Suman. Happy in their world in the chawl, their life takes a turn when Suman meets her old friend Neha, and happens to see her apartment. Thus begins their struggle to obtain an apartment of their own.

The chawl itself contains a host of highly endearing characters, one more interesting than the other. So there is the smart, enterprising youth who works in a garage, the henpecked, out-of-work man with a terrifying wife and a dubious bottle of cough syrup, and the gossip-loving old couple who have been abandoned by their son. And then some.

The simple script is embellished by some earnest performances that truly warm their way into your heart. Bharat Jadhav as Ravi and Bhargavi Chirmule as Suman have to carry the film for the most part, and they do it well. Kishori Godbole as Neha is extremely charming, and her character truly lights up your heart. Amongst the character actors, Vijay Chavan, Viju Khote and Ashalata stand out for their dialogues and comic timing. Rajesh Shringarpure, playing Neha’s rich, businessman husband struggles, but the cast around him often makes up for it. Rakesh Bedi, playing a sleazy Gujarati broker hams, but to good effect.

Veteran actor Dr. Shriram Lagoo makes an extremely brief appearance, but his mere presence has a certain, inexplicable power to it. One surprising cameo in this film is that by Helen. I only wish she had a meatier role, one that had a proper graph to it.

The film has its share of flaws. Everything gets wrapped up too conveniently in the end. The climax could have been made more impactful, instead of making it all fit like a kindergarten jigsaw puzzle.

Also, the manner in which Tilekar has attempted to juxtapose life in a chawl to life in an apartment is really insufficient and even reeks of a bias. Each style of living has its own pros and cons, but the director’s tilt towards one side in this film is hard to miss. So much so that it appears that perhaps Tilekar doesn’t feel this way in real life, but has forced it into the film to make it work.

Technically, the film leaves a lot to be desired. Simple things like avoiding the UV haze that forms around characters and ensuring sharp focus in shots would have gone a long way in ensuring that technical inadequacies don’t hamper the storytelling.

However, in spite of its many flaws, One Room Kitchen works because of its honesty. What I enjoy in Marathi cinema is how it often captures the essence of a Maharashtrian lifestyle. This film does that. So, even though the film is not exactly a must-watch, I would still recommend it to people, only to support the rise of Marathi cinema, and to savour the simple joys of life along the way.