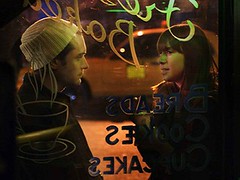 My Blueberry Nights has the tendency to drag, you almost work up a yawn but before it turns into one, you let yourself get absorbed in the melodies and moods of the film. It’s a stimulating film, but you’ll have to struggle to feel for the characters or the development of the story.

A Wong Kar Wai film often gives you the feeling of being a voyeur. It’s almost as if you’re ruffling through the pages of a character’s life, in the most ordinary day-to-day manner. Yet, you remain the outsider who has symbolic observations and opinions about the stories.

The beauty of such a narrative can be seen in films like Chungking Express and In the Mood for Love - where every character and every story neatly takes its time to reveal its facets. Emotions become like a silent character: Desire in Chungking Express and Loneliness in In the Mood for Love, molding into the parallel narratives. The film revels in its plurality but even so you feel a sense of connection – with the emotions, the characters and the slow brewing of a cumulative story.

My Blueberry Nights, Wong Kar Wai’s first English language film, however, is undercooked. A film about a New York girl Elizabeth (Norah Jones) who on getting her heart broken, tries to find solace in the Blueberry pie from Jeremy’s (Jude Law) café. Unable to cope with the pain, she travels from one state to another – Memphis, Nevada, picking up temporary jobs to keep up. She meets quirky people along the way (A heartbroken cop and his ex – David Strathairn and Rachel Weisz – and a compulsive gambler – Natalie Portman) who serve as distractions to her pain.

My Blueberry Nights’ first problem is Norah Jones. Her vacant expression steers far from being mysterious and secret-bearing. To feel a sense of physical and emotional travel through a film that takes on a journey it becomes absolutely essential to relate with the protagonist. She looks her part, but the credit for that also goes to the indicative lighting and background score, much like most of Wai’s films that also use the ambience to tell the story.

As Elizabeth becomes Lizzie and Beth in the different cities, the characters she meets are enchanting but only in isolation. As a viewer you might only be able enjoy the pure essence of a passing character when you’re able to mark a difference/similarity or random comparison to main protagonist – especially in a film that vows to explore relationships and human emotions.

The only connection through the film comes in the form of postcards that Jeremy writes to her. The problem with that is you can sense a predictable end to this wandering tale of discovery, with every postcard. It’s the first 10 mins of the film that stay with you – during Elizabeth and Jeremy’s interaction, which bring out Wai’s true stylistic traits as an auteur.

The setting is moody; the dialogues are not spoken but heard in the form of background music. It is when Elizabeth trails off on her personal journey of whatever it is she is seeking, you lose interest in her or her life and you aren’t given enough time to develop an interest in the new characters.

The true perpetrator of a story in My Blueberry Nights is the soundtrack of the film. Background score changes as per the city she travels to – we get to hear Cat Power crooning in her folksy/indie demeanor the New York sequences. The film opens with Norah Jones’ own song ‘The Story’. We travel to Ry Cooder and country music while in Memphis and end up with an assortment of Neil Young/Amos lee blues while in Nevada. It’s the soundtrack that urges you to stay with the story longer and to make personal connections.

The DVD includes interviews with Wai and Norah Jones, plus raw footage from the film. The interview with Wai brings us to realize that his treatment for My Blueberry Nights, one of his latest movies, remains similar to his previous movies – he is still trying to explore the play of emotions in a character’s life, and their reactions that brings the story forward.

My Blueberry Nights however falls short of connecting. It lingers around with its colorful melodies and moody frames, but before you can shift and get on with the narrative you end up losing interest in what it has to offer. If you are a regular viewer of Wong Kar Wai films however, I urge you to let this mistake pass you by. Drool over Jude Law, hum the soundtrack and watch another of his film’s after this one.