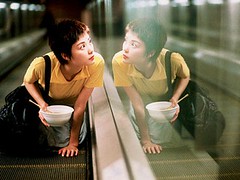 Watching Chungking Express is like sifting through a photo album on a rainy evening. The steam from your coffee mug adds a misty feel to the pictures of the city, which are tourist-y. Every now and then, the monotony of those pictures is broken by abstract Picasso-like imagery. Nothing holds, or stays still in the film, but yet it’s not a fast paced story. Wong Kai Wai’s Chungking Express is magical and yet reveals lump-in-your-throat type surprises.

Love manifests itself in many ways; it’s a visual and written cliché. All you need is perception and memories, and you can see the cliché unfold beautifully. In Chungking Express, the Wong-Kar Wai manifestation of love however, intoxicates you, makes you dance around in a circles of extremities – with crimson red passion on one side and navy blue, bordering grey loneliness on the other.

Chungking Express is about love lost, the city life with all its colours, humanity and its feats - all while it slowly deconstructs every little thought bubble that pops in your head through the film. The film is divided into two stories, about 2 cops and their bitter experiences with love.

Cop 223 is hung over his girlfriend, May who left him on April fool’s day. He buys a can of pineapples with a month long expiry, hoping she’ll be back before the expiry date. Cop 663 is also dealing with an intense breakup with his airhostess girlfriend. He starts to find routine comfort in a midnight café amidst a waitress called Faye, while she breaks into his apartment to cure her fascination for his passiveness.

Nothing explicit is common between both the stories – they are accounts of two random cops in a fast-moving city. A city that’s not going to stop to cure broken hearts. The city incorporates colours, disconnected photography and pop-culture (the waitress is addicted to ‘California Dreamin’ by The Mamas and The Papas, a splash of blonde wigs and dark glasses and Dinah Washington played in the background of the second story)

You won’t see love spelt outright in the film, it’s in the pace with which the parallel stories secretly interact, it’s in the silence of the two protagonists and their kaleidoscopic experiences, and most of all it’s in the visual treatment of the film.

With many billboard signs and slogans, pop-music as background score, an amalgamation of realistic and romantic cinematography and conflicting colours, the movie makes you feel you’re watching a Godard film, but before you can hold that thought – the visuals shift between film/video to pixilated images.

The criterion collection DVD of Chungking Express comes with a commentary by British film-writer Tony Rayns – who offers a unique analysis of the film. It helps, because it might take you multiple viewing to realize that something is happening in the film. One watch down, all you remember are shots, colours and an intoxicated, jazzy hangover of the film. The kind that makes you want to rewind and re-watch scenes.

The only other extra is a short excerpt (12 min.) from a 1996 episode of the BBC series "Moving Pictures" in which Wong and Christopher Doyle (cinematographer) discuss the shooting of ‘Chungking Express’ and then-upcoming film ‘Fallen Angels’.

In Chinese, the title of the film translates to Chungking Jungle – a metaphorical take on the concrete jungle of the city. A jungle where love doesn’t get lost – it only comes back to you in ways you cannot comprehend; you might be able to - with multiple viewings of Chungking Express. Buy the DVD, you will be thanking me soon.