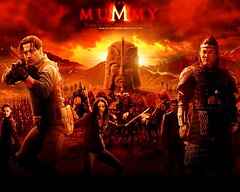 Mummy - Tomb of the Dragon Emperor

Warmed up leftovers of the Undead which would best be buried deep down for ever!

I wonder what director Rob Cohen thought when he set out to make this film, because watching it was a most nightmarish experience for this reviewer!

We have had two Mummy films before, with lots of sand and desert and special effects and the blond Brendan Fraser playing Rick O Connell (a most spurious and contrived reworking of the Indiana Jones character), so what do you do for the for the third film of the series?

You put in a Masala mix; throw in everything that you have got and hope it works. So you have Yetis, you have an ancient shape shifting Chinese emperor played by Jet Li, a good witch played by Michelle Yeoh (was the director paying tribute to Ang Lee’s Crouching Tiger Hidden Dragon or was he attempting to create a similar film?) along with the hero and the heroine (ostensibly middle aged and retired from the profession of saving the world from Mummies) and their strapping son, and the elixir of Immortality: all of this set in the Himalayas, Shangri La, Shangai, and England in the 1940’s. You also have the mandatory special effects and crude attempts at comic relief thrown in.

Unfortunately the film just sinks into a morass, and never rises above it. I had hopes from both Jet Li and Michelle Yeoh, but the director leaves them with nothing to do. Jet Li is too wooden faced or clay faced to make a villain, Michelle Yeoh has about ten minutes of screen time. The big climax is flaccid and looks like a lousy video game that you unfortunately cannot switch off.

The action set pieces are highly contrived, and have nothing new to offer in terms of stunts or visuals, and the fight between Jet Li and Brendan Fraser is to put it simply, most doltish.
Imagine Jet Li being defeated by Brendan Fraser in hand to hand combat, ha ha!

It is high time the producers stopped raising the Undead Mummies, to extort money from the living! Will someone put a curse on them for all eternity?

The O Connell family has to stop an Ancient Chinese emperor from coming back to life and ruling the world.

Warmed up leftovers of the Undead which would best be buried deep down for ever! May the mummies rest in peace!!...

Sounds like Tomb of the Dragon Emperor met everyone's expectations... Brendan Frasier tries too hard to act, so you can tell he's acting

This film looked like the script had been penned in about two minutes flat. Or more likely the 'one size fits all generic script' was taken down from it's shelf, a couple of names were changed and off this movie rolled from the mass produced factory line without another thought.

Gone was Rachel Weisz who obviously saw the sense in not appearing in this travesty. Gone was a 'Mummy' who instead was replaced by a clay baked Jet Li who seems to be cropping up in movies more than a bout of the pox in medieval Europe. Gone was the humour and sense of fun apparent in the other films in this franchise to be replaced by meaningless, endless chases, so called action sequences. and a bunch of washed up would be thespians taking their flimsy parts way to seriously.
This film unashamedly confirms Ervine's comment that "American motion pictures are written by the half-educated for the half-witted."