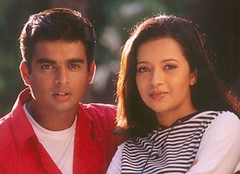 There’s a 2-minute scene in Minnale that aptly describes the entire film. In it, Madhavan is stuck in a phone booth in the rain, when he happens to see Reemma Sen play and dance with street kids. He can’t see her face at first, but with a stroke of lightning, he happens to catch a glimpse. And that’s when he knows – he’s fallen madly in love with her. He can’t explain it – it’s as random, forceful and hard-hitting as the very stroke of lightning. The film is very similar – it’s pure and it brings you anticipated joy. Don’t be surprised if you find yourself randomly twatting your toes in the air after the film; I know I did.

I remember Minnale (Lightning) being the first Tamil film I attempted to watch without subtitles. I’ll be honest and tell you the only reason I did it is because I’ve seen the Hindi remake some 100 times (Rehna Hai Tere Dil Mein). My heroic act fell flat with fervor with a fellow Tamilian friend’s wise words – “I hope you’re not watching a Gautam Menon film without subtitles. Half the movie is English anyway.”

There's a point behind me bringing out this incident – Gautam Menon is household name now in most parts of South India with films like Kakka Kakka, VinnaiThandi Varuvaya and Varanam Aayiram. His films work because they have a certain universal quality to it, but they still manage to retain the socio-cultural flavor of his roots.

Minnale, however, is very different from his later films, which have strong themes and hard-cutting performances. It’s a simple, run-off-the-mill story about a guy who tries to woo a girl he saw once and fell in love with.

One of Madhavan’s earlier films, in Minnale, he plays his most charming role. Genuinely smitten by Reena (Reemma Sen), he convinces you about his mad love, while the camera runs up and down with him on a road, like a love-struck maniac and even more so, when he wants to pull his hair out because he’s “whipped”, to put it colloquially. This portrayal works because, for a film released in 2000, for once we see romance staying away from cheesy songs with loud expressions.

This is achieved mainly because every performance, by Madhavan, Reemma or Aabas is believable and fresh. Through the film you feel like you’re listening to a "how-this-happened" story that a friend tells you over coffee while you’re catching up after years. It brings that bright smile of anticipation on your face – as you see the film unfold.

Personally, I would have preferred a heroine with a brighter face than Reemma Sen. She just has the tendency to look bored sometimes. Madhavan’s witty grandfather Subunni (Nagesh) plays a charming performance as a father figure who supports his feelings with full rigour. Madhavan’s best friend Chokalingam (Vivek) adds a sense of comic relief, something that is central to most South Indian films.

The music of the film tells half the story, really. Harris Jayaraj’s first film as a composer is probably his best soundtrack till date. The songs are heart-warming, hummable and go so well with the flavor of the film. The entire package makes you want to wish you were the lead couple, so you could be a part of a romance that is so next-door.

When I first picked up the DVD of Minnale, I was a bit alert. While the DVD has no feature as such, after having heard so many people praise a film that was a dud in Hindi, I wanted to mentally compare. Technically, the subtitles in the DVD are comprehensible (yes, I checked) and they help in making you see a sense of purity that the film has incorporated.

Simply put, Minnale blew me away. It’s simple, charming and much unlike its Hindi counterpart which borders on a corny, watered down version of the film.

Minnale, however, has a very strong personality as a film – like an old, yellowed letter you find written with a blunt pencil. It doesn’t matter what language is being used, if you focus you’ll read into a pristine love story that dominated somebody’s life. Much like a stroke of lightening; it happens to you only once.

So-So, by Ekta Khosla : Hi, Greetings from PayOffers.in. We have gone through