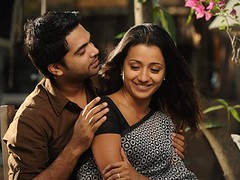 You might not understand a love-crossed, obsessive love – a surreal, ambitious love – a lifelong, desperate love – a love that transcends logic and comprehension but Gautam Menon's Vinnaithandi Varuvaya shows you all of that and makes you fall in love with it.

Before anything, Gautam Menon’s Vinnaithandi Varuvaya (Will You Cross the Skies for Me) makes you understand what falling in love at first sight is all about. It might not convert you, but you’ll get it. The cult film, also known as VTV, and A. R. Rahman’s first project after the Oscar hype, is a beautiful, uncomplicated love story between people from different religions. You might find the plot a little too simple, you might not agree with the outcome – but the beauty of VTV lies in its ability to suck you in and make you understand the plight of the characters.

Karthik (Silambarasan) and Jessie (Trisha Krishnan) live in different floors of a two-storied house in Chennai. Jessie is a tradition Christian girl, who wouldn’t dream of being even slightly rebellious. Karthik is a mediocre guy, who has ambitious plans of becoming a filmmaker. Gautam Menon doesn’t take much time in establishing the blazing chemistry between the two; being opposites yet having a strong pull towards one another.

Ofcouse, there’s a conflict. She belongs to a strict Christian household, and she’s absolutely sure they have no future. And predictably so – Karthik doesn’t sit back. He pursues her, and he makes her fall in love with him. Typical filmy material right? Wrong. Menon spins his own visual spool to explain the love to us – mostly through Kathik’s thoughts manifested in dance sequences and surreal love-struck conversations with himself.

Thought bubbles keep running through your mind. Why can’t they just get together or why is Karthik so persistent about Jessie? We see Jessie through his eyes – she becomes the audience’s muse as well, and so when he continuously asks himself, “Of all the girls, why did I have to fall in love with Jessie” – there are no answers provided but you know why.

Rahman’s music has a contemporary sound in the film – with echoes, choruses and thin voices - the songs become like melodic thoughts, be it the infatuated 'Hosanna', or the deeply lyrical 'Mannipaya'. The songs become a space for each character to sing out their stream of consciousness. The credit for this goes to Menon, for being able to use Rahman’s music and Thamarai (lyricist) words to capture the character’s contemplation and make it into a visual narrative of soulful melodies.

The DVD of Vinnaithandi Varuvaya has no special features as such – but a good set of comprehensive subtitles and thankfully no loss in quality, because the film should be enjoyed for the visual treat that makes us fall, rise and celebrate the love being portrayed in the film.

The best part about VTV however, is not the portrayal of love but in its ability to make you observe a positive angle through the struggle of love. VTV is as much a story of the frustrations and rejections - but you empathize and relate with the characters without that dash of misogyny that most story-tellers might tend to use.

That’s where Menon’s vision needs to be applauded, to be able to present a well-rounded story and make it strikingly about the love, the visual memories, and the characters and less about the struggle. The frustration is treated as a skipping stone in the trajectory of love. Eventually, as they toil to cross seas or skies for their love – they manage to draw a pretty darn good picture of it.