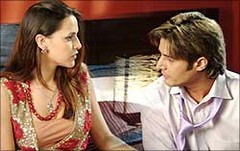 No amount of extra “i”s can save this one. Jimmy Sheirgill and Neha Dhupia look cool. So what if they gave an alright performance, they can’t pull it through with those lousy lines. Even day-to-day conversations at our homes would be more interesting.

After a long long while, watching a bad movie did not make me grit my teeth in anger. It made me laugh in despair. Kudos to the 17 year-olds sitting beside me who were saying the lines before the actors in all the clichéd scenes, and obviously giggling at their victory at the most serious spots.

Only the dialogues can be blamed when you identify with the situation but not the characters. Especially since the performances were not half bad. The sick PJs (poor jokes) - yeah that's how sick and poor they were - try their best to make your eyes roll. But we are not going to give them that satisfaction, are we?

Jimmy Sheirgill looked awesome and does whatever justice can be done to the aweful lines given to him. You actually feel bad for the actor Jimmy than his character. While Neha Dhupia is certainly not the slimmest stick around, she has a certain Rubenesque appeal. Her costumes were outright gorgeous, especially the saris, and she carried them well too. Her performance is obviously not the best but the lady's skills are improving gradually.

It's not good enough if you have individual alright performances. A couple has to have chemistry. Now, screen chemistry is a very abstract term. But I think it can be described as a failure when you understand the tension between a husband and wife but you don't feel tense. You can see they are trying to be romantic but it doesn't strike a chord. Again I think the actors cannot be held entirely responsible here. I think it was more to do with the camera decisions. In most of the shots between the couple, or any twosome for that matter, the camera was on the speaker. The listener was seldom in the frame. It was almost like each person's lines were shot separately.

Yet again, Om Puri is wasted in an inconsequential loud role and Kamini Khanna is shrill. Speaking of which, it felt like all side characters were conversing in the highest possible pitch. The transition from one story to another was jerky and clumsy. Not to mention that the side stories could have been completely avoided since they were never meant to be given adequate footage. Also, this ain't the best time to show our man - Tendulkar hitting fours and sixes. I don't blame the makers since I assume they finished filming long before the World cup debacle. Or maybe it is the right time to remind us of our glorious past. Oh, here I go again...

The mediocre presentation of the songs makes you forget that they are actually worth listening to. The "rang barse" (from Silsila) type holi song doesn't work at all because the jealousy has no background. The college kids' need to learn lip-synching. The situations were created in almost every song to fit with the lyrics. Its supposed to be the other way around. "Tere bin" is certainly the best of the lot though and made a lot more sense because of the sub-titles.

The silver lining is that the mercury is close to 40 degrees out there and the cinema hall had functioning air-conditioners. I am sorry - the silver lining is that the movie is not pretentious at all. It is being marketed as "a feel good movie", so you know everything will sort itself out even before you buy your ticket. As a little bonus, I don't have to spend energy on trying hard not to give the story away. About those dialogue-writers-in-their-own-right-giggly-teens - we were in the first-day-first-show, so it was not like they were seeing it for the second time. Besides, who would want to? Unless they go again just to ogle at Jimmy and Neha.

Thumbs down, by Rachel Fernandes, Bollywood Mantra : ...Also the climax is again a predictable one and does not do much for the film.... full review

Thumbs down, by Sanjay Ram, Business of Cinema : ...The film is short, but couldn't have been stretched any further... full review

Thumbs down, by Rajeev Masand, IBN Live : ...Random scenes are slapped together one after another, with obvious disregard to the viewer's attention or intelligence... full review

Thumbs down, by Arpana, Now Running.com : ...The story is too predictable to keep the audiences hooked... full review

Thumbs down, by Raja Sen, Rediff : ...There's precious little to watch in this haphazardly put together tale of predictable pitfalls.... full review

Thumbs down, by Pankaj Shukla, SmasHits.com : ...Delhii Heights' moves on a very thin story line, and most of the time it progresses horizontally... full review

Thumbs down, by Nikhat Kazmi, Times of India : ...A bunch of yuppies who try hard to find love in a city that hardly seems to know the definition of love... full review

Yay! Thumbs Up, by Enjoylyrics.com : immy Sheirgill looked awesome and does whatever justice can be done to the aweful lines given to him

Yay! Thumbs Up, by Lyricswale.com : Yet again, Om Puri is wasted in an inconsequential loud role and Kamini Khanna is shrill. Speaking o

Yay! Thumbs Up, by Lyricswale.com : The mediocre presentation of the songs makes you forget that they are actually worth listening to. T

So-So, by Tamillyrics.co.in : The mediocre presentation of the songs makes you forget that they are actually worth listening to. T

Thank you Amit! I did visit your blog. Thanks for adding a link to my blog.

You can send me an e-mail at [email protected]