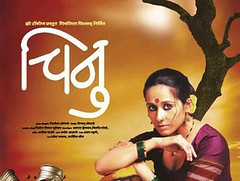 This week’s Marathi release, Chinu, is a film that you shouldn’t watch even if you don’t have options like Paan Singh Tomar and Kahaani playing in theatres. Even the word ‘mediocre’ would feel like Marlon Brando if it could come to life and watch this film. A cast in dire need of acting lessons combines with writing that could put pens and laptops out of business for good, to come up with what can only be described as a yawn-worthy effort. Chinu is strictly avoidable, my soft corner towards Marathi cinema be damned.

In a particularly irrelevant scene in Chinu where some men sit down over drinks, a particularly irrelevant side character in the film sees a Little Person and begins humming a famous and relevant tune from an old cult Tamil film (which also saw success as a Hindi dub). That was perhaps the only moment where the makers of the film displayed at least some semblance of insight, interest and understanding of what they could do to make their film the least bit watchable.

Chinu is a spunky and pretty village belle who displays no interest in getting married to any of the boys in her village. So much so that even the village head intervenes, trying to convince her to pick a boy and settle down. But 'nothing doing' for her, because she wants her aging mother to be taken care of and her younger brother with a mysterious psychological illness to be cured and to then be educated. Thus, she dreams of getting married to a city-bred man - something that is taboo in their village.

As luck would have it, Sampath, a man from their village who now lives in the city shows interest in her. From here on things go southwards – for her as well as for the film.

Chinu, directed by Neelima Lonari is essentially a ‘nothing’ film. With a script that is all over the place and with possibly the worst ensemble cast in recent times, the film drags along with neither aim nor direction towards a terrible, inane climax.

Lead actress Tejaswini Lonari, who plays Chinu, is beautiful in a rather unconventional way. In fleeting moments, she showed flashes of being like - dare I say it - a semi-rustic Smita Patil. She tries hard, but never really manages to pump in enough credibility into her portrayal of the character. One of India’s better actors, Zakir Hussain, is wasted in an insignificant role. Popular Hindi soap actor Sharad Kelkar is the only other cast member who shows at least a hint of ability.

The film’s biggest problem is that it has been treated rather amateurishly. It often seems like an ambitious and lengthy student film, made more to practice track-and-trolley and crane movements than to make a serious piece of cinema. As a result, even its under-2-hour runtime seems so much longer than it actually is.

It goes without saying that Chinu is a film best avoided. Perhaps the only benefactor (if I can even use the word) from this film is BlackBerry. Every single character who owns a phone in the film uses RIM’s business class phone. There is perhaps no bigger sign of the famous decline of the once-popular Canadian phone manufacturer than the fact that they had to settle for this film for such intensive product placement.

Pradeep menon seems good in writing, but it needs guts, patience and hardwork to make any film, even if it's not worth watching, talking or reviewing is very simple for a geek person. Such people are born waste in life.