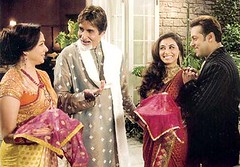 An editor with a bigger scissor and a screenplay with a better sense of which part of the story deserves how much screen time, would have made this movie one of the better movies of the year. It is obvious that the makers ran out of time using all the possible cinematic liberties and had to rush the content in the last half-hour. This one clearly has the same target audience as Baghban, but might appeal to a wider range of viewers because this time, people in the 30-40 age group will also identify with the characters.

This is one of those rare movies where the second half is of a much higher standard than the first. It just might have to do with who has more dialogues. The first half has Salman, Salman and more Salman grunting out lines. But, the second half you are left mesmerized by the real boss, Amitabh Bachchan. Rani Mukherjee shows the audience what acting is all about and looks gorgeous, especially with less make-up. It’s sad when elaborate lines are used to sketch out characters rather than facial expressions and body language, when you have the top actors at your disposal. Hema Malini looks great but has given a very dry performance.

To Salman Khan’s credit though, there is this very specific thing that he can do - get a grin out of you with no acting whatsoever. He can deliver comic lines really well. That’s how the movie starts - light, romantic moments. Some executed well and some absolute rubbish. But post-intermission, even though the pace slackens, the emotional scenes are portrayed with a lot of sensitivity. The movie is worth a watch just to see how different characters handle their grief. These sequences will surely bring more than a tear to your eye.

The title song, composed and sung by Amitabh Bachchan simply leaves you speechless. Once you get over the fact that the songs don’t have any reason to be there, you can begin enjoying them. There are a couple really good songs ‘baawri piya’, ‘har manzar’, and ‘bebasi dard ka aalam’. “Chalo chalo” is a foot-tapping, sweetly picturised number. The lyrics are a very small notch above the usual unimaginative Sameer fare.

What really went wrong then? The dialogues. There are some really good dialogues, but when you find out that they were actually implanted there to be repeated later for senseless melodramatic effect, all you can say is, “Oh God!!”. Not once, not twice… oh well, I lost count after five. Then there are the inane sermonizing dialogues that are repeated in passive and active voice, like a teacher would to drill a point into the students’ brains.

The tedious length and lack-luster dialogues fail to retain attention despite a good choice of subject.

So-So, by Sameer Wadekar, Glamsham.com : ...he writer Dr. Achala Nagar does nothing special to keep the viewers riveted... full review

So-So, by Taran Adarsh, IndiaFM : ...the emotional track in the post-interval portions unfolds at a lethargic pace... full review

So-So, by Nikhat Kazmi, Times of India : ...Mr Bachchan manages to take all those mothballed dialogues and deliver them in a style that strikes straight at your tear ducts.... full review

Thumbs down, by Baradwaj Rangan, Blogical Conclusion, The New Sunday Express : ...the creakiness isn’t in the tale so much as in this particular telling... full review

Thumbs down, by Irfan Makki, Planet Bollywood : ...Yet the three hours I spent in there turned out to be extremely painful... full review

Yay! Thumbs Up, by Hindilyrics4u.co.in : For all english songs lyrics

Yay! Thumbs Up, by Hindilyrics4u.co.in : lyricswale.com is a comprehensive online resource for musicians and music lovers which provides text

Yay! Thumbs Up, by Hindilyrics4u.co.un : For all Telugu Songs Lyrics, visit this website.It has all telugu songs regularly updated

So-So, by TimELiebe : Would be Yay! - if the male love interest weren't Salman the Smug....

Nay! Thumbs Down, by JJ : worst movie ever!!

The title song, composed and sung by Amitabh Bachchan simply leaves you speechless. Once you get over the fact that the songs don’t have any reason to be there, you can begin enjoying them. There are a couple really good songs ‘baawri piya’, ‘har manzar

@Meetu, we kind of liked this one, and felt the time the movie took to establish Salman Khan's Avi as Rani Mukherji's Millie's "Great Love" was necessary. Admittedly, that could be because we don't like Salman Khan very much, and felt he and Rani Mukherji had little chemistry - while she was very convincing as a woman in love, HE wasn't remotely convincing as the man she was in love with!

We did like that the movie took the time to establish the marriage as a happy but slightly fractious one over the years, and implied that Millie might be a bit co-dependent as their life together went on - not in a creepy way, but like a loving and devoted wife would, so that you believe how what happens would shatter her.

@TimELiebe I'm a little confused. Did you mean ""Great Love" was necessary" or "was not necessary".

@Meetu - I think the "Great Love" was necessary to sell this story about moving on from the death of your Great Love, rather than letting it consume you.

Sorry - again, not getting e-mail follow-ups.

@TimELiebe Will look into it. again.

@TimELiebe did you get the follow-up comments on email?

@Meetu - nope. Never had - and it doesn't end up in my SPAM folder either, so I'm very confused.