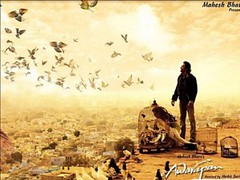 Nothing we haven't seen earlier - a criminal tries to mend his ways. Only this time he fails and gets another chance to do the right thing. A decent attempt at showing the psyche of a man who can kill without a thought. But nothing that cannot be missed.

A hard-core, hot-headed, cold-blooded criminal has a past that resurfaces in unknown ways. It surprises him too by showing him his fuzzy, warm side. In the "opposite attracts" sense, it feels natural that another person's purity will amuse him and eventually draw him to the person. And all of this is played out well too.

It is very clear that the story writer's focus is on the main character, Shivam (Emraan Hashmi). There is no attempt to talk about the other characters. They are a given, a fact that you can accept or reject - your call. Similarly the couple coincidences in the main plot are difficult to digest but they are presented in a very matter-of-factly manner - take it or leave it - the writer couldn't care less.

There is an attempt to make characters more interesting. For example, Malik (Ashutosh Rana) is a person who takes pride in the fact that he is good at judging people and their motivations, but is it true all the time? How will he take it? Good thought for the audience to chew on, but it is not addressed satisfactorily. Such character developments are not given the strong conclusion that the set-up deserved.

Very rarely does a Hindi movie build the whole story around just one character and sticks to that. No back story for the villain, the side-kick, the lead lady - nothing! While that hurts a little bit, at least my usual objection to the mixing of genres is held at bay. The focus on Shivam makes the character study at least that much more interesting. The product becomes worth the watch as the story of Shivam.

The writer's implied arrogance however is easily forgiven, due to the justice done to Shivam's stylization and the depth in which his character has been portrayed. All of which would have been lost, had Emraan Hashmi not been composed and restrained in his performance. Be it as a romancer of the lady, the action-master gangster, the loner, or the loser who is looking for a meaning to his life. I just wish something could be done with his voice. (Or have they done it already? I don’t remember his voice being so jarring and whimpy in his more recent films.)

The other person who really impressed with his performance is Purab Kohli playing the madcap goon who thinks he owns the world. It took me a while to recognize him. This was more because of his act rather than his make-up. On the other hand the women do nothing to evoke any emotion. It'd be unfair to blame them because the writing doesn't do justice to their characters. One is to plain vanilla, the other is in the most difficult situation a woman could find herself in but the one scene that shows you the gravity of the situation comes way too late. Sure, the first scene does tell us about her situation, but it isn't followed up. The next scene shows her in the lap of luxury. It feels like a major continuity glitch in the writing, like they forgot to write a couple of scenes.

The introductory scenes in Mohit Suri's films are both impressive and disappointing. They have a CSI episode kind of an expose only the build up here is not half as exciting. That's because, the basic plot of a criminal seeking redemption has done the rounds often enough.

They try to add a little depth by including a family feud and the chaos an efficient outsider's (Shivam's) presence can do in an already tense situation. But, it goes nowhere and ultimately falls flat on the face.

The filmmakers allude to spirituality and existentialism throughout the film. Afterall you have a monster trying to become the Buddha. If only they had done so with more conviction and didn't have to succumb to out-of-context song and dance. It's a slow, serious film. And though it tries hard, it's not subtle.

Note: I saw this film on Satellite TV.

Yay! Thumbs Up, by Boss : Great movie. One of the best movie ever. Everything from acting to music to direction is excellent.

Yay! Thumbs Up, by Hassan Mehmood : This movie Awarapan is best one movie

Yay! Thumbs Up, by mobking

Yay! Thumbs Up, by RAJESH : Hey what a movie it express true concept n philosophy of any religion, humanity is a universal reli

Yay! Thumbs Up, by Shantanu : Well directed,well enacted especially by Hashmi and soulful music make this an interesting watch!

A criminal tries to mend his ways. Only this time he fails and gets another chance to do the right thing.

This is one of the most underrated Emraan Hashmi movies...one of those few in which he performs so brilliantly, you want to forgive all the glaring glitches in the script! The subtlety at places is brilliant too...Especially love the situation and picturization of the song "Tera Mera Rishta" where an atheist discovers faith! Sadly, some parts of the movie are too mediocre, ultimately making it an above average fair. This one deserved to be seen by so many more people, if only for the honesty in Shivam's character!

Shantanu has given this movie a Yay! Thumbs Up(Well directed,well enacted especially by Hashmi and soulful music make this an interesting watch!). Shantanu has posted 9 comments and has rated 5 movies. See Shantanu's page for more details.
ligne

I have not seen this movie, but since you are on the subject of dvds and movies about criminals, watch Karam (starring John and Priyanka)if you get a chance for its direction if nothing else.

@Shantanu yeah, it wasn't all bad.

@ligne haven't seen Karam. Will put it in my list and try to catch it.

It is very beautiful story. i like it very much

Awsome movie by the way

ZeeJay has given this movie a Yay! Thumbs Up(70). ZeeJay has posted 1 comments and has rated 1 movies. See ZeeJay's page for more details.
Hassan Mehmood

The best one movie Awarapan.