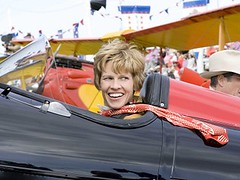 Mira Nair’s Amelia, met an unfortunate fate at the box-office, despite being a story about a very interesting character from history. A story of Amelia Earheart, the first American woman pilot to fly solo across the Atlantic and who in her attempt to circumnavigate the world, lost radio contact and went missing somewhere over the Pacific Ocean, never to be found again. When I was in school, I’d learnt that she was a really great woman. This film doesn’t develop that sense of awe about her. It barely skims at the surface of her life, her marriage, her flying expeditions and her extra marital affair and fails to go any deeper.

The DVD of Amelia, is a bit of a surprise. Despite featuring an award winning starcast, an acclaimed director (Monsoon Wedding, The Namesake) and a biopic about a historical figure - a category that’s a soft spot for critics - this film has no blurbs on its front or back cover. Not a single one. No stars, no ratings or recommendations from any film reviewers. At first, I thought it was a layout faux pas - maybe they forgot to add those.

To be sure, I then remembered how something was amiss when the film released theatrically in India. There was hardly any buzz in the media, no celebratory coverage considering Mira Nair helmed this big Hollywood project. There’s two-time Oscar winning actress Hillary Swank in the title role of Amelia Earheart, Richard Gere plays George Putnam, her manager and husband, and Ewan McGregor is Gene Vidal, her lover. But the consensus amongst reviewers and audiences has been common - this film could have been so much better.

After having seen the film on DVD, I think that opinion isn’t entirely wrong. But considering the amount of trash that Hollywood throws up on screen most of the time, I think Amelia, is still fairly watchable. The screenwriters must have obviously come across too much literature that already exists - three books are credited for the adaptation - about the first woman pilot to fly solo across the Atlantic, who disappeared somewhere over the Pacific ocean on a trip attempting to circumnavigate the world.

It’s a dilemma that even the writers of the Harry Potter franchise face in every film: How to pack it all into a two-hour film? But Earheart’s biopic is no spell-binding special effects bonanza. Sure, there are some spectacular aerial shots of her plane crossing continents - fondly recollecting the journey of her life. It only touches the skeleton of Amelia Earheart, hardly managing to get into her soul and depict what a head-strong woman she was to be able to convince a male-dominated society about determination to fly. Solo.

This film makes it appear that the task must not have been that difficult, given Putnam’s (Gere) support. He is a master strategist, a publisher who always seems to be cracking deals, using her name, appearance and knowledge wonderfully to create intellectual property, resulting in wealth for the two of them.

There is rarely a scene that makes you go ‘Wow, what a woman she was!’, when the truth is that she was indeed a woman who’s achievements and characters did make Americans go ‘Wow’.

Gene Vidal (McGregor) has a role which is rather forgettable - he mouths about 7-8 lines in the film and one would have wanted to see so much more of him. Gere (Putnam) plays the loyal husband well, but there is very little chemistry between him and Amelia. Before they get married, their romance seems rushed and although Putnam is devoted, one is not clear whether its a marriage of convenience since he realises she is the hen that lays golden eggs, or he genuinely has fallen in love with her.

Hillary Swank puts in a sincere effort and her Kansas twang, coupled with her make-up give some authenticity and weight to the real persona of Earheart. Much like the aeroplanes she flies in the film, she glides through her role with ease. The character is sought after, but the performance isn’t.

Despite its shortcomings, I did feel a sense of pride that this is Mira Nair’s film. I’d put little fault on her - it is the writing that lets her down. The film has some high points, the climax being one of them. It’s gripping, tense and is extremely well put together. I think there must have been pressure on her in deciding what parts to keep and what parts to edit, since the final output that this film projects of Earheart is of a very non-offensive nature. The kind which wouldn’t want to upset the succeeding generations of the lead protagonists.

You become sure about this when you see the deleted scenes in the DVD extras. It throws some light on Amelia’s love life before she met Putnam. It also introduces us to a character mercilessly chopped out from the final cut - that of Putnam’s first wife. All her scenes were removed from the film.

I must also point out that the DVD extras noted on the cover are a bit of lie. The disc inside doesn’t have a Making of Amelia, The Power of Amelia Earheart, Movietone News and Trailers. Now, that’s cheating, the last thing one needs after seeing a disappointing film.