An innocent looking boy to grow up into the protagonist, Dilsher with a thick stroke of dark grey. He can do anything to get what he wants. A viewer like me is hooked. I wait to see how it all turns out. I am intrigued by the air of mystery. And the film turns into a family drama – a couple in the midst of a cold war, a son with 'daddy' issues and so on. Somewhere in the middle of all of this, our protagonist is trying to come of age.

Halfway into the film, it felt like the writer-director wanted to do it all in this film. What if, he didn't get a second chance? Only that can explain the “video album” style of picturisation and choreography of the songs. So what, if most of the songs are going to be on my playlist soon.

The backstory for Dilsher's inner voice, in the form of Amira seems contrived and thus unnecessary. Dilsher's own discovery, that music is his calling, comes across as a by-product and not a destination that the film was aiming towards. 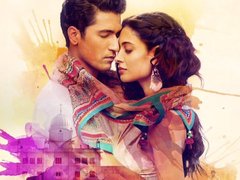 The problem lies in the disproportionate screen time reserved for the Sikand family. Dilsher (Vicky Kaushal) is manipulating his way to impress Gurucharan Sikand (Manish Chaudhari). Sikan in turn, seems to have marital problems and doesn't like his son. Hmmm...you wonder why for half a second and you guess it – which is the 'big reveal' in the end. Yet, a viewer like me hopes till the end that you guessed it wrong.

Anyway, that wasn't the purpose of the film, right? The idea was to tell the story of a boy who is trying to find his voice, himself. That bit is rushed up, almost as an after thought. Like an essay was prepared for an exam; the topic for the essay was “Voice”; limbs were added to the pre-packaged story to fit with the title. And of course, because it is an indie film, it has to carry some quirk – that is added in the form of camera work and sound design.

The only saving grace then are the performances. Vicky Kaushal performs as if he is carrying a very huge burden on his shoulders – that of carrying the film. It gets an eager and sincere act out of him, but the load is unnecessary. Each time I watch Manish Chaudhuri, he instills and reinforces in me a fear – this character can do just about anything. Raaghav Chanana too does well as the insecure son who wears a mask of strength.

However, performances and gray characters aren't enough to make Zubaan enticing. The story tries to do a little of everything. Therefore, every thing comes across as half-baked.

Thumbs up, by Subash K Jha, Bolly Spice : ...Besides an outstandingly contemplative performance by Vickey Kaushal, Zubaan gives us a brand new directorial talent Mozez Singh (again, is this really his first film?!). Mozez has a rare ability to create a drama of dissent in his plot without resorting to excessive melodrama. There are passages in Zubaan where we see the director’s vision of an individual held ransom by his ambitions. And we are shaken in a rejuvenating way. ... full review

Thumbs up, Bollywood Hungama : ...On the whole, ZUBAAN comes across as a magnificent masterpiece of the recent times. Strong performances and extremely relatable screenplay will surely bring the audiences to witness the film that speaks about love, ambition, trust, faith and betrayal. ... full review

Thumbs up, by Sarita A Tanwar, DNA : ...Zubaan is lovingly rendered sweet indie film about the spirit of reinvention. Celebrate it. ... full review

Thumbs up, by Rohit Vats, Hindustan Times : ...Overall, Zubaan is one of the better music-based films in the last couple of years, and will make for a quite a movie experience. Don’t miss it if you can help it. ... full review

So-So, by Tushar P. Joshi, Bollywood Life : ...Despite the weak moments and an uneven story line, Zubaan is worth a watch. Vicky Kaushal’s performance in itself is worth the price of an admission ticket! ... full review

So-So, by Suparna Sharma, Deccan Chronicle : ...As usual, Manish Choudhary is good. As is Meghna Malik. Raaghav Chanana hardly has a role, and whatever he has is mostly negative. Yet he makes Surya real, and adds, despite very brief scenes, desperation and pain. Vicky Kaushal is both vulnerable and criminal at the same time. He is very talented and can carry off any role. If the director’s repeated lapses into gibberish around Sarah-Jane Dias had been kept in control, Zubaan would have been a hard-hitting, powerful drama. It’s made woozy needlessly. ... full review

So-So, by Ushnota Paul, Filmfare : ...At 118 minutes duration, this unconventional story is crisp and the first half steals the show. The second half is slow in parts and the end is a tad rushed. The film reiterates the point that you have to move out of your comfort zone to find your true calling – something we all should take note of… ... full review

So-So, by Martin D'Souza, Glamsham.com : ...The Music is the other hero of this film. We saw brilliant music in JUGNI in January. This one, I dare say, goes an octave higher. The picturisation and the dynamics that go with making a brilliant song visually wow is seen in Sun Le Na Koi Pukar; this song will take your breath away. ... full review

So-So, by Suhani Singh, india today : ...Singh shows promise as a filmmaker especially when he directs his songs like vibrant music videos -- "Music is My Art", and Mandar Deshpande's fantastic rendition of "Ajj Saanu O Mileya" are standouts - and in one particular darkly comic family dinner scene. But Zubaan is too uneven. It is worth a trip to theatre for Kaushal's credible performance that leaves you rooting for the hero. Here's an exciting actor we can't wait to see again. ... full review

So-So, by Shubha Shetty-Saha, MiD DAY : ...However, standing above the film and the script is Kaushal’s absolutely brilliant performance. The young actor, who impressed us with his debut performance in Neeraj Ghaywan’s Masaan (2015), is at admirable ease in front of the camera and while slipping into the role of the traumatised, stammering Dilsher.... full review

So-So, by Saibal Chatterjee, NDTV : ...Zubaan stretches itself too thin at times in trying to raise its narrative tempo. In its quieter moments, however, it does manage to get its voice heard. ... full review

So-So, by Namrata Joshi, The Hindu : ...However, despite the fabulous music the songs feel more like intrusions than part of the storytelling. Vicky pulls off the Sikh pop singer act as well, especially in the Ajj Saanu O Mileya number, which plays out like a rousing anthem in the end. If only the lead-up to it was as compelling. Zubaan is a film that you stay with till the end even as you rue that it could have been so much better. ... full review

So-So, by Mohar Basu, Times of India : ...Zubaan might test your patience but it is heartbreaking in parts. Luckily, the melodrama is kept at bay even when the protagonist finds himself divided between materialism and mirth. ... full review

Thumbs down, by Anna MM Vetticad, annavetticadgoes2themovies : ...At the film’s premiere in Delhi, Mozez Singh announced that Vicky had shot for Zubaan before Masaan, which in his view technically makes Zubaan the actor’s debut film. Dear sweet, lovable Vicky, please say a prayer of thanks that Masaan released first. If Zubaan had come to theatres earlier, I am not sure I would have woken up in time to catch your next film. ... full review

Thumbs down, by Smita Vyas Kumar, Desi Martini : ...Zubaan left me flummoxed. I liked the idea behind the story but the movie seems to be directed too cleverly leaving you with a somewhat disconnected, disjointed feeling. ... full review

Thumbs down, by Jaidev Hemmady, Movie Talkies : ...As for the music, it is not organic at all and makes you feel as if they have been included in the film to give the audience a musical break from the narrative, which is quite uneven in the first place as mentioned earlier. ... full review

Thumbs down, by Raja Sen, Rediff : ...It is decently made and reasonably well acted, especially by Manish Chaudhari who conquers the screen in his swaggering role of a boorish businessman. ... full review

U_Chaturvedi: watched #Zubaan just now. Seriously a worth watch movie. if you like a light movie with good music and sense. loved the love. :)

RoopeshSays: Watched #Zubaan It's All About Your Passion, Living Your Dreams... A Good Watch...

ramsanjay: There's so much of Heart in #Zubaan, there's a moment of you if you look hard enough.... Vicky as usual rocks it #FoundMyself #MustWatch

Oye_DD: #Zubaan is such an inspiring movie.. I am sure everyone must have gone through this phase of finding their true self.. #MustWatch

NehalKapadi: #Zubaan is a brilliantly made film! A must watch for all movie buffs. @ZubaanTheMovie

loud_engineer: weekend movie to see is #Zubaan . honest movie to see. if the story was a big tight but anyways like the editing and the acting.

ishaanstwitr: #Zubaan should be seen by all. For its taut narrative, soulful fusion music, evocative visuals and strong performances!

90bornboy: #Zubaan is such an inspiring movie, pleases the heart. A must watch for all movie buffs

khalidrafiq141: Zubaan Movie Review: Performances are solid but momentum is missing in this musical drama https://t.co/jUTvU7CY6H

talk2teewe: Zubaan tries 2 b an assorted platter by exploring too many themes & that's where it confuses. #zubaanthemovie https://t.co/AhILAtBjE4

Is it safe to take kids for this movie..i heard there are few love making scenes in this movie?

@Aman There is one lip-to-lip kiss. However, I am not sure the topic will appeal to kids.