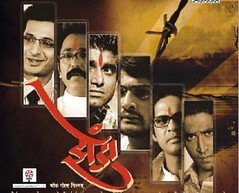 Whether or not you have a political opinion; whether or not you are actively involved in politics; you are certainly affected by what goes on in the political parties. This is a gutsy view of the current behind-the-scene in Maharashtra. Strong dialogue, serious material and yet not preachy - we are exposed to a part of what makes this world filthy - good ol' dirty politics.

A line in one of the songs translates to -
There's no foreigner to burn you,
Nor a Gandhi to put out the fire
- Implying of course, that there's a fire for sure. You have created it, you need to put it out. There's no enemy and no savior other than you.
Zhenda tells you what this fire is, in current-day Maharashtra. The political situation created by the power-controllers in the system, and the resultant change in social dynamics of the common man, including the party-workers. And it does so pretty efficiently and effectively.

Some powerful, smart dialogues, some realistic performances, and a story that could be as real as possible - Zhenda is an intriguing affair right from the beginning. The first few minutes create curiosity about the complex political mesh prevailing in the state. And then you are introduced to nitty-gritty using a few representative examples - a couple of party-workers, an aspiring politician, their friends, family, and other supporters.

It then comes down to two specific party-workers who are greatest of friends and as situation demands fall into different factions of political party. Each thinks he supports an ideology. But both are victims to blind faith and misguided loyalty.

Though it's pretty much predictable that a film making a political comment will have character arcs that can go only a certain way, but it is interesting to see each one develop. The transition of each character is marked by the function of power he controls and the priority in his life. A non-believer in politics, an ace marketing guy, gains power and his priority changes from aspiring to move to the US to something completely unthought-of for him. A completely brainwashed political party-worker realizes his worth in the political system through his negative experiences and takes control of matters. The role of family and personal career growth is somehow inversely proportionate to the power you can exude.

There are a few things that leave question marks. Is it so easy for a party-worker to go off on his own? And you try to convince yourself. Maybe - considering they aren't that valued in the first place.

But that's the film. The bravery needed to make such statements and have a story and characters so similar to real life figures is a remarkable deed in itself. To take it a step further, and take on, arguably, a political family most "popular" for taking on to violence to prove a point - the Thakareys - could be considered martyrdom, by some. But, Avdhoot Gupte does it and does it well, without flinching.

I am tempted to call it a documentary. A visual documentation of the situation created by our "leaders" in the state we live in, in the last few years. We, the ones who are not politically involved, at least not enough to join a party, are bystanders and get a peek into the lives of those who believe in their leaders with eyes closed. It is targeted towards these people and poses a question on their behalf -
Vithhalla, konta dharu me zhenda?
O Lord, which flag should I hold up (support, fight for)?

And the only answer seems to be, "none, really." I wish the unsaid mention there is "None other than your national flag, dear ones, none other than that…"

first and foremost, I thank you for reviewing a Marathi film. I will definitely watch the movie. I have often felt that the technical quality of a Marathi movie lagging when compared to a Hindi film or for that matter any south Indian film. What do you think?

Even I am tempted to go for the movie. Already saw the scene it created on IBN7 lokmat that day!

@PK maybe, but some of the Marathi films are completely mind-blowing in the subject matter they choose. Once they earn enough traction, I'm sure production values will get better with increased budgets.