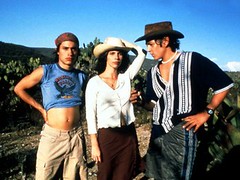 Alfonso Cuaron’s sexually explicit road trip Y Tu Mama Tambien (And Your Mother Too) is the kind of stuff apt for a pyjama party night. This film makes no effort at subtlety. The drama, humour and action - all revolve around sexuality. None of it however seems forced and just when you begin to wonder what was the point of it all, the twist towards the end of the film save the day with a story around the ‘such is life’ theme. Winner of Best Original Screenplay at the Venice Festival, this film also won similar nominations at the Golden Globes and Academy Awards. Either watch it alone, or with a cinematically mature bunch of people. Make sure your parents are at bay!

Directed by Alfonso Cuaron (he made Harry Potter and the Prisoner of Azkaban and produced Pan’s Labyrinth), this film stars one of my favourite Spanish actors Gael Garcia Bernal (The Motorcycle Diaries, Amores Perros, Babel), along with Maribel Verdu (Milk) and Ana Lopez Mercado (Pan’s Labyrinth).

Bernal (Julio) and Verdu (Tenoch) play very close teenage buddies, who at a wedding, court Ana (Luisa) and casually propose a road-trip to a beach, hoping she would bite the bait. When Luisa really does, the trio embark on a journey that makes them discover new shades not only about each other’s pasts, but about life in general.

The film’s genre, a road trip, lends itself to easy viewing - thanks to humour, scenic locales, picturesque, agile photography. The purpose of the trip and the key take-away from it, is what takes this film a notch higher. Due credit for that goes to Cuaron’s screenplay. The interplay of the dialogues and the narrator’s voice-over mix very well and provide a longer shelf-life to the characters.

I frankly thought there’s too much sex in the film and after a point all that the three are discussing is sex, how they do it, who they did it with and how it was. Sure, there’s a purpose to all those talks and although not all of it is titillating, I’m a huge supporter of subtlety and I’d prefer that a film-maker use semiotics and his own creativity to interpret such sexual energy. Cuaron’s style is more like, ‘This is how it happened. I don’t want to hide anything’.

One of the strong points of the film, is the manner in which Cuaron depicts life outside their car. An accident on the highway, a bride’s family asking for alms, political unrest, regular police patrolling, a beggar entering a restaurant to ask for alms - each of them are beautiful reminders that although the trio may be on a dream road trip, but eventually, they will have to return to the big, bad ugly world. Shades of that ugly world - the character’s histories, some cloaked in lies, appear intermittently throughout the film, resulting in tears, agony and arguments. Each of them are fantastic allegories of bumps on the highway. You slow down for a moment, but eventually you move on.

I loved every actor’s performance in the film. Both Bernal and Verdu are intense, jovial and brooding. They’ve done their nude scenes with enormous confidence and their camaraderie shows. Ana is graceful, bold and mysterious and the one force that keeps the three together. Her character, as you learn by the end of the film, is the only thing that saves the film from becoming just a film about a journey.

Watch this film with a mature bunch of people - those who appreciate cinema and do not start giggling or gasping at bold love making scenes.

Yay! Thumbs Up, by harsh : Brilliant

@harsh Arcopol doesn't write for wogma any more, so unfortunately, he won't be able to get back to you on this one. But, as regards the rating system that readers are given, 'yay' should be taken in the spirit of the rating. You have the whole comment section to write reams of praises for the film. Unfortunately, you chose to use the space to yell at our choice of words. Even so, you can leave more comments to talk about the film. Thanks!!