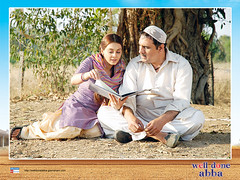 We live in corrupt times and how?! Well done Abba reminds us of that and more. It reminds us of the gravity, the irony and our own submissiveness to the whole do. Would have worked much better if it were about an hour shorter.

Anyone who has spent even a little time in trying to get any work done from a corrupt, bureaucratic government will relate with the film. The issue at hand here might be more serious and even larger, but it's easy to identify with the protagonists, Armaan Ali (Boman Irani) and Muskaan (Minissha Lamba). A standard beginning that sets the tone for the narrative; a slow and frustrating build-up - as if we should feel the characters' emotions; an interesting twist post-interval; a few irrelevant sub-plots; and an out-of-place climax make the film just about watchable.

The only reason to watch the film would be to take a peek into the exasperating process of getting any administrative work done that involves government approvals and the trick used to show the system the mirror. The funniest bit is that, like one would expect, the the bureaucrats' and politicians' completely see through the point. Master stroke in the sotry-writing department.

The most fascinating element for me in the film was the Andhra accent in which Hindi is spoken. It completely highlights the rural setting too. Having spent a lot of my summer vacations in that region, the language brought along its share of nostalgia and thus fondness. That doesn't make the language or dialect consistent, but it is used well in large parts. The dialogues are plain-speak and yet not the boring types. They keep you engaged through.

The other department that makes this film worth its while is the performances. Minissha Lamba is simply brilliant as the strong-headed village girl. Both, her language and her looks are completely in tune with her character. Boman Irani too is completely convincing, but we wouldn't have suspected that anyway, right?

The put-offs though were the various side-plots. The milieu here is very similar to that in Welcome to Sajjanpur by the same director. But the not-so-main stories in that one were extremely engaging. Here they are extremely annoying. Right from the Engineers lust for his wife, to the woman-trade, to the look-alike brother. They took away more than what they added to the ambience.

These plots also lengthened the film by a lot more than what could have been a brilliant light film on a serious issue. Though they might have served the purpose of adding a few more smiles because I did hear a lot of laughter from the audience.

I'd suggest a wait until the movie is out on TV/DVD just because it does call for the patient audience in you. The treatment given to the dry subject is refreshing and won't be a complete waste of time.

Thumbs up, by Martin D'Souza, Glamsham.com : ...It's hilarious yet eye opening how our babus function in the deep interiors.... full review

Thumbs up, by Mayank Shekhar, Hindustan Times : ...The film remains a fine black comedy, which could only disappoint in parts for its weakened pace, or the director’s discomfort with a soundtrack to help with the movie’s commerce. ... full review

Thumbs up, by Jaya Biswas, IBN Live : ...As for performances, Minissha Lamba takes you by surprise with her bubbly self. ... full review

Thumbs up, by Kaveree Bamzai, india today : ...It's a premise as brilliant as it is absurd and it takes some marvelous acting and writing to pull it off.... full review

Thumbs up, indiaserver.com : ...The uniqueness of this movie is that though it is a comedy movie but, it does not go too far in an unrealistic manner to tickle the audience to laugh. ... full review

Thumbs up, Movie Talkies : ...it shows that the film has been made on a tight budget. ... full review

Thumbs up, by Jahan Bakshi, Now Running.com : ...he directs Mishra's material in a thoroughly low-key fashion, just letting the writer's words speak freely instead of imposing any stamp on it. ... full review

Thumbs up, by Subhash K Jha, Now Running.com : ...Cinematographer Rajen Kothari goes through the cluttered lanes of old Hyderabad with jaunty steps. No one is looking for despair here. It's a life lived at the edges with a zest to seize the day. ... full review

Thumbs up, by Rahul Singh, Passion for Cinema : ...If nothing written above convinces you, then just watch this movie for BomanIrani who has shown before his quest for perfection and versatility. ... full review

Thumbs up, by Ankit Ojha, Planet Bollywood : ...Technically, the movie is brilliant, save for the green screen footage that looked immature and was improperly motion-tracked in many places. ... full review

Thumbs up, by Abhijit Mhamunkar, real bollywoood : ...a sweet gem that works despite no big names... full review

Thumbs up, by K K Rai, STARDUST : ...The direction of Shyam Benegal shows the mastery of the doyen of parallel cinema on comedy and topical thing... full review

Thumbs up, by Nikhat Kazmi, Times of India : ...The film is a sheer delight, with the events unfolding in a breezy, comic vein which keeps the ribs relentlessly tickling. ... full review

So-So, by Ramsu, 24 frames per second : ...Benegal never pushes too hard for a laugh. He seems content with a chuckle here and there. ... full review

So-So, by Aparajita Ghosh, Apun Ka Choice : ...Performances are good but a special mention should be made of Boman Irani and Minissha Lamba. ... full review

So-So, by Bobby Sing, Bobby Talks Cinema.com : ...With a feeble basic story line, the movie tries to convey almost all the major problems faced by the rural areas ... full review

So-So, by Taran Adarsh, Bollywood Hungama : ...ELL DONE ABBA! is an average fare from a maker who has made much better films in the past.... full review

So-So, by Deepa Gahlot, cinemaah : ... The film is populated with a lot of colourful characters, but it never rises to the expected heights of absurd or black humour. ... full review

So-So, by gaurav malani, indiatimes : ...And just when you wonder if the film is a neorealist take on Armaan Ali’s well-wish in the vein of classics like The Bicycle Thief or Do Bigha Zameen , the second half goes in complete reverse gear... full review

So-So, Indicine : ...The film has a simple plot but suffers due to its pace. ... full review

So-So, by Bryan Durham, MiD DAY : ...I won't bring the sluggish pace up simply because I feel it was intentional. ... full review

So-So, by Anupama Chopra, NDTV : ... Both have important roles but neither is a compelling or charming enough to carry the load. Of course, most of the burden lies on Boman Irani’s able shoulders. ... full review

So-So, by Elvis D'Silva, Rediff : ... the dialect is there but different actors have varying degrees of fluency with it.... full review

So-So, by SpiceZee Bureau, Zee News : ...The film is worth a watch for its excellent timing and of course Boman Irani!... full review

Thumbs down, by Baradwaj Rangan, Blogical Conclusion, The New Sunday Express : ...After the modest success of Welcome to Sajjanpur, Benegal strives, once again, for that folksy, RK Narayan-meets-Majid Majidi feel.... full review

Thumbs down, by The Narcissist, Cinemaa Online : ...A murder of the cinematic idol that Shyam Benegal is.... full review

Thumbs down, by Deepa Garimella, fullhyd.com : ...It is, however, much less comic. And oh, much much slower.... full review

Thumbs down, by Ajit Duara, Open Magazine : ...Sadly, much of Well Done Abba is so full of clichés that we reach uninterested boredom very quickly.... full review

Thumbs down, by Shilpa Jamkhandikar, Reuters : ...While the film does make you laugh quite a few times, there are also times when the pace lags and you are tempted to bolt from the theatre... full review

Thumbs down, by The Thirdman, Upper Stall : ... it takes time to warm up to Boman Irani. He has his moments in the film but he also appears to be 'acting'. ... full review

Although the concept of the movie was nice but it failed to impress the audience.