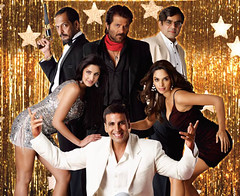 One contrived situation follows another. Each scene outdoes the previous one in defying your belief in any kind of sense. No amount of good acting can help save the careless writing.

Why are we supposed to be entertained by suspending our sense of reason? Why is a few laughs considered "worth it"? Why is "time-pass" good enough? Why is one forced sequence after another called a script? Why is comedy dictating the situation, instead of comedy flowing from the situation?

Save a couple of one-liners here and there, there's nothing enjoyable about this slapstick. Unless you are the kind who enjoys patting yourself on being able to accurately predict what the writers have in store.

The male cast does not surprise, in that they do exactly what they have been doing in every slapstick. So, while they do their bit well, not many viewers would object to them choosing worthier scripts. Except for Feroz Khan. It almost felt like the makers didn’t think anyone in the cast was worthy of first billing. So they got Feroz Khan to blow his trumpet to justify and take the lead in the opening credits.

Katrina Kaif fulfills expectations. She satisfactorily basks in the glory of the light thrown on her and giggles to fill in for lack of lines. Mallika Sherawat on the other hand, seriously does well as the designated flirt of the movie.

Technically the movie is plain awful. To start off, it makes liberal, blatant, and shabby use of the blue screen. It might have been just about acceptable if it were just the first two. But in combination with the third the visuals are just disastrous.

The camera work, especially in the beginning, looked like the cameraman was testing out the properties of a wide angle lens. The non-existent editing just adds to the woes. Continuity gets step-sisterly treatment a little too often. No effort seems to have been taken even to match the colors between shots in a few sequences.

Some of the songs were chopped off absolutely abruptly too. Not to mention that their placement makes no sense whatsoever. And what a waste of Malaika Arora's dancing skills! Why did they refuse to spend on decent choreography instead of the cameraman's voyeurism? Okay, you don't need to answer that.

I trash another slapstick. What more could you expect from a person who can't enjoy masala movies even after disowning logic?

Thumbs up, by Razeen Shameem, Bolly Spice : ...Anees Bazmee does very well in bringing the comedy on the screen... full review

Thumbs up, Bollyvista.com : ...Ask no questions and you will not be disappointed at all.... full review

Thumbs up, by Rachel Fernandes, Bollywood Mantra : ...Writers Praful, Rajiv and Anees manage to come up with a script that involves high drama, enthusiasm and mad sequences... full review

Thumbs up, by Angel Rani, Deccan Herald : ...Anil Kapoor looks every bit a lover boy with his steady stock of one-liners.... full review

Thumbs up, by Taran Adarsh, IndiaFM : ...WELCOME remains faithful to the genre from start to end.... full review

Thumbs up, by Abhijit Mhamunkar, indya.com : ...The film completely belongs to the Anil – Nana jodi who keep you rolling with laughter with their one liners... full review

Thumbs up, by Sreeram Ramachandran, M TV : ...It's a lot like a stuffed crust pizza...very cheesy, but very enjoyable.... full review

Thumbs up, by Vijay, MovieWalah : ...Welcome is not Akshay Kumar's movie - certainly not in a way we are used to watch him taking honors in all his movies... full review

Thumbs up, by Satyajit, SmasHits.com : ...Do visit the finest of slapstick comedy when Rajiv along with Dr. Ghungroo and his wife gets messed up in a car mishap... full review

So-So, by Tajpal Rathore, BBC : ...The stellar cast radically improves the chances of this comedy of errors... full review

So-So, by Lidia Ostepeev, Planet Bollywood : ...“Welcome” is rather fragmented; ideas run their course so then comes the arduous task of setting up another funny encounter from scratch.... full review

So-So, by Nikhat Kazmi, Times of India : ... there's Nana too to tide over the boredom... full review

Thumbs down, by Naresh Kumar Deoshi, Apun Ka Choice : ...the comedy in the film is so childish that I felt embarrassed watching most it... full review

Thumbs down, SearchIndia.com : ...Welcome is like an old man who suddenly finds himself in bed with the sensuous babe Mallika Sherawat... full review

Thumbs down, by Saakshi Juneja, To Each Its Own : ...Aneez Bazmee’s script stinks big time and his direction is equally painful.... full review

Thumbs down, Upper Stall : ...Like the character of Uday Shetty in Welcome, the critic needs to ‘control’ himself while reviewing this film. Try and not lash out, not completely trash this film for its poor sensibilities, uninspired direction, and regressive outlook.... full review

Nay! Thumbs Down, by Mark

Hey your reviews are beginning to look less and less like from "a part of the audience" and more and more like from a critic.

Just an observation, no offense meant.

Well, a critic is also a part of the audience, right?

welcome is such a boring comedy(or torture should i say" the movie was entirely predictable.. the climax of a dangling house was pathetic~~if you wanna see katrina kaif (well thats the onli reason you would wanna see) then only recommended

welcome is very good movie.It is so better than om shanti om.All songs and characters are good in this movie.welcome is a good welcome of year 2008.

Hi,
One thing that strikes me in ur reviews is the titles u lend them. Like in this case, "Bad writing, worse execution". This is in sharp contrast with the very spirit of ur site, that is WITHOUT giving the movie away, which I believe is the single most pleasant aspect of ur writing.
With these titles though, u DO give away what ur review has to offer. It seems to sap that subtle sense of excitement. Doesn't it ???

Hey Kunal :) It is hard enough not giving away the story of the movie...I couldn't possibly write a review without giving the review away :D

Jokes apart, the tagline is supposed to give a 5-10 word review, for those readers who don't want to read every precious word I have to say about the movie. Then there is the

Meetu, dont get offended. Urmilesh just wanted to say that the average audience likes entertaining movies even it doesnt have any intelectual value. Welcome is one such movie.

Critics mostly prefer and give ratings to movies with intelectual values. the ones with a message. like Munnabhai. Welcome doesnt have that. But still audience likes it.

You seems more like a critic than an Audience.

Not really, Urmilesh. There are many sections in the audience. There are non-message movies that I have liked, Don, Honeymoon Travels, Bheja Fry to name a few.

No offense taken at all.

I was an extra in this movie.
What surprised me (besides my lines being cut from the film) was that the whole scene with the painting being stolen at the auction was cut.

I did see the film in the cinema, years ago, and I have to admit... it sucked. Even I sucked... and I was only in it for 3 seconds.

Mark has given this movie a Nay! Thumbs Down. Mark has posted 1 comments and has rated 1 movies. See Mark's page for more details.