A lot of Vishwaroop 2 feels like you are watching the first episode. With no decipherable value add to the first film, this one in the series feels like a drag with one semi-interesting scene after every 2-3 extremely boring ones.

you are digging deeper into your cosy bucket seat, pushed as far away from that proverbial edge as is possible.

In fact, the very few things that redeemed the first film somewhat are missing here. Kamal Hassan has fewer occasions to express. The women have even lesser to do. The villains hardly induce dread.

Even if we had nothing to compare the film to, Vishwaroop 2 would be more or less equally pointless. The writing is extremely incoherent and jerky. Even if you somehow put two and two together, what you arrive takes you through a very bumpy road.

I am not even getting into the plausability, that would be a far-fetched expectation. Save for the underwater sequence and one song’s picturisation, every other sequence from the ones between husband and wife, senior and subordinate, enemies, mother and son are all just awkward. As if none of the characters in the scene have a connect with the other, let alone chemistry. Everyone is just so awkward.

To add to the mess, these individual scenes are joined with even lesser sense of connection. Even for the half-good sequence like the said underwater one, there are no answers to why this woman is diving in and when her job is considered done. Some character said only she can do it, another character said she was done – the audience is expected to respect that authority. 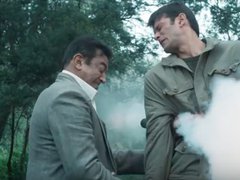 The overarching themes of religion and terrorism are just a backdrop for people to beat other people up. As an action thriller, the only new thing about Vishwaroop 2 is that it has no sense of urgency. The characters in the film themselves seem so relaxed about the impending doom, that you are digging deeper into your cosy bucket seat, pushed as far away from that proverbial edge as is possible.

Thumbs up, by Subhash K Jha, Bolly Spice : ...This is not a dumbed-down militancy movie. Yes, this is a learned view of terrorism filled with sly references to Obama and 9/11. The unintiated may find the narrative hard to keep up with. As Kamal Haasan if he cares. But those who enjoy watching a good wack on the back of militancy, Vishwaroopam 2 is an engaging if somewhat choppy ride through the terror terrain. ... full review

So-So, by Baradwaj Rangan, Blogical Conclusion, The New Sunday Express : ...It feels like a reminder that, with this actor who has been on our screens for longer than many of us have been alive, the older films may be all we have left.... full review

So-So, by Anupama Subramanian, Deccan Chronicle : ...To be fair, most of these stunts and action sequences are riveting and enjoyable. Kamal is ever present with his dry wit and self-aware punch dialogues, which also brings his political aspirations to the fore. He is relentless and although he looks burnt out due to Vis’s heavy workload, his brains never tire and is always a step ahead of his numerous halfwit villains. Enjoyable in parts! ... full review

So-So, by Devesh Sharma, Filmfare : ...Somehow, the actor has been overshadowed of late by his self-indulgent filmmaker avatar. He does everything right in the film as an actor but we're still left with an unsatisfied appetite as we walk out of the theatre...... full review

So-So, by Priyanka Sundar, Hindustan Times : ...Rahul Bose’s terrorist Omar also returns to Vishwaroopam 2. The two have an interaction which stands out for its intensity. The play of emotions on the face of Rahul as he realizes that his family was rescued shows how extremism and violence have taken over his whole being. ... full review

So-So, by Jaidev Hemmady, Movie Talkies : ...However, if you are a Kamal Haasan fan, ‘Vishwaroopam 2’ is not a bad watch as such…... full review

So-So, Sify Movies : ...With a run time of two hours and twenty minutes the film keeps you glued to the screen, but there are instances that are predictable and at times the conveniently crafted scenes make the narrative seem ridiculous. At one stage the film seems to be a drama of geriatric actors that fail to thrill. ... full review

So-So, by Rachit Gupta, Times of India : ...Vishwaroop 2 is a classic example of overkill. This multi-lingual film has been shot in both Hindi and Tamil. And despite having some genuinely good moments, the film tries to put forth a little too much, a little too quickly. ... full review

Thumbs down, by Anna MM Vertticad, annavetticadgoes2themovies : ...Apart from the shock value of the extreme violence it features and a vital statement about fundamentalism-versus-education, Vishwaroop II has nothing new to offer. It is a scar on Haasan’s filmography and a dead bore. ... full review

Thumbs down, by Bobby Sing, Bobby Talks Cinema.com : ...In all, recalling the earlier film, VISHWAROOP 1 had a highly impressive first half and a comparatively terrible second ending on a poor note. VISHWAROOP 2 interestingly takes it forward from that exact poor note and never makes a comeback further sliding down to more unbearable levels. And I think that should say it all about this supposedly patriotic espionage action thriller. ... full review

Thumbs down, Bollywood Hungama : ...On the whole, VISHWAROOP II is a highly avoidable flick. The film has too many tracks and the narration and execution is flawed and weak. Also at the box office, the film will have a tough time. ... full review

Thumbs down, by Rahul Desai, Film Companion : ...The problem with globe-trotting espionage dramas is rooted into its form. Spy thrillers have very little to draw upon, which is why we see so many of the modern versions parodying their own themes rather than building upon real experiences. Good movies imitate life, but mediocre movies imitate the movies. No prizes for guessing what category Vishwaroop II falls in. ... full review

Thumbs down, by Johnson Thomas, Free Press Journal : ...The story/screenplay credited to Kamal Haasan is totally disjointed, and sorely lacking in cohesion and plausibility. Everything that happens in the film appears like an after-thought, completely contrived and thus indigestible. Atul Tiwari’s Hindi dialogues strain credibility and the unnecessary addition of dull, uninspiring songs and music by Mohammad Ghibran sinks the overall effect into a sinkhole that pulls all the effort into deeper insignificance. ... full review

Thumbs down, by Janani K, india today : ...On the whole, Vishwaroopam 2 is a story that is let down by the shoddy screenplay. Even a star performer like Kamal Haasan couldn't save the audience from this mess. ... full review

Thumbs down, by Shubhra Gupta, indian express : ...That leaves Kamal Haasan, who has co-written, directed and produced the film, as the patriotic RAW agent, to do all the heavy lifting. In the first edition, the veteran star-actor led from the front: here the ‘dirty soldier turned bloody espionage agent’ is all thundery lines like ‘main mazhab nahin mulk ke liye khoon bahaata hoon’. But even he can’t rise above the shockingly inept script, which he rescues only in a few places, when his trademark intelligent, wry self-awareness manages to kick in. The rest can be safely ignored. ... full review

Thumbs down, by Umesh Punwani, koimoi : ...All said and done, fans of Vishwaroop should forget there was a sequel planned for it. They should again watch the part 1 instead and keep its memories intact. It’s like one of those many Hollywood actioners which are all glam and no content. ... full review

Thumbs down, by Uday Bhatia, Live Mint : ...As audience surrogate Nirupama, Kumar gamely offers comic relief, as does Bose, though that couldn’t have been his, or the director’s, intention (an antagonist who’s being laughed at constantly isn’t serving the film well). But the focus is nearly always on Wisam: robotically competent, supercilious and, for a spy, distressingly short on witty rejoinders (“Ashmita, puh-lease,” he says – twice). One scene, with Haasan and Kumar in a hotel room, fairly throbs with his tiredness, the sense of a long innings coming to a close. When she asks him if he’s really hurt or just pretending, he says, with what seems like genuine hurt, “What do you think? All the time – acting?” ... full review

Thumbs down, by Sonil Dedhia, MiD DAY : ...Vishwaroop 2 isn't unwatchable, but it is an inconsistent film that fills up the gaps between its many action sequences with ridiculous attempts at humour and drama. Haasan made my eyes well up with his heartwarming performances in Raja Paarvai, Sadma and Appu Raja... full review

Thumbs down, by Kunal Guha, Mumbai Mirror : ...The first part of this film had shocking twists such as the drastic transformation of an effeminate Kathak teacher who was a closet Bond tailing terrorists. This one is a watered-down version that barely draws on the veteran actor’s many talents and scripts its own demise.... full review

Thumbs down, by Saibal Chatterjee, NDTV : ...That pretty much sums up Vishwaroop 2. It repeatedly fires blanks - noisy but of no use. Has a movie sequel ever been so pointless? ... full review

Thumbs down, by Gautaman Bhaskaran , News18.com : ...Really, I fail to understand how a brilliant actor like Haasan (who can forget him in Nayagan, for instance) could slip into such a shoddy, convoluted sequel, which fails to put its point across. A rank bad effort that is eminently avoidable. ... full review

Thumbs down, by Sreehari Nair, Rediff : ...Look carefully and Vishwaroop will seem to you as Haasan's tribute to himself: You will see in it a collection of his own photographs and his efforts to bring to the screen his personal fantasy of playing a globetrotting spy ! There's an unmistakable agility, still, when he performs the action sequences.... full review

Thumbs down, by Ganesh Nadar, Rediff : ...If snacks during the interval counted, Vishwaroopam II would have got a second star... the vada pav I had in the interval was almost as good as the Mumbai original. ... full review

Thumbs down, by Nandini Ramnath, Scroll.in : ...The backtracking ends up stretching out the already-lengthy 144-minute narrative. Only one sequence featuring Wisam’s mother, played by the ever-graceful Waheeda Rehman, hits the mark. The action sequences might have worked at the idea level, but their bargain-basement execution suggests that a bigger budget was needed for Vishwaroop II to have achieved its Bond-Bourne ambitions. ... full review

Thumbs down, by Vishal Menon, The Hindu : ...Yet in the sequel, it’s almost shocking to see how little is done with a character that was built up so much. We expected Omar to be a tidal wave. What we get, instead, is barely a ripple. ... full review