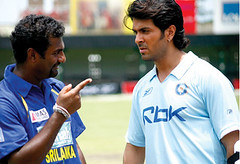 What an achievement! The ball is made to bounce like a yo-yo on an extremely flat pitch. But, the good news is Hurman has begun to act!

I love watching cricket. I love our batsmen. I love the veterans as much as the new blood. I love our spinners, and I love our pace bowlers. I love our fielding when we do it and abuse the misfielding more often than not. And yet I cannot make myself watch the rerun of a match. Even if we have won. Even if my favorite batsman has scored a century. Even if a bowler has broken a world record. Well, what can I say, I am that kind of a cricket-fan. Imagine my plight when I watch an entire movie match, where I know not only the result (duh! The name of the movie is 'Victory!!), but also know it ball-by-ball. Yes, it is that predictable!!

Sure, the scriptwriting textbook says have a set-up, a conflict, and a resolution. But these guys seem to have taken it a tad too seriously. Each act is build up to a limit where even a novice in movie-watching can forecast the next step and the two after that.

The same goes for the lame lines given to one and all. I agree we are a cricket-crazy country. But repeating - once every 5 minutes - how the entire nation, ONE BILLION of us are looking up at/down upon a cricketer or are excited about/disappointed with an outcome becomes just too much to handle.

Considering the overall issues with the writing department, the actors have done one helluva job! Hurman Baweja has certainly come a long, long way from Love Story 2050. He can actually cry convincingly. Very few male leads manage to not look like comedians when they do that.

Amrita Rao is comfortable in her usual homely, warm character. Though here she occasionally bursts into the inner voice of different characters and brings them to their senses. But, I really want to see her do something different. Wouldn't she want that too? Anupam Kher, of course, makes the most of lines that have we've heard over and over again in the past few decades. The pride of a father, the stoop in his shoulder, the agony, the anger, the frustration can only be credited to his years of experience.

Its not like predictability is a sin. O-kay it is. But not an unforgivable one. But there have been movies which are beautiful despite committing that one. This one is not. Maybe, just maybe, it might have worked if it was an hour shorter. Or maybe not.