It is always difficult to talk about a film when you like the concept especially because it deviates from the norm; but, it falls short on implementation. If the film falls back on the same type of stereotypes and exaggeration to drive home a point, it doesn't matter if the concept is new. It just feels like the setting has changed. This is what happens with Ventilator. Slapstick and toilet humor stays the same, only that it happens alongside a deathbed. So, there is some variation to go with the deathbed theme.

Even as each character has only one facet of their personality exposed, there is broader black-white brush stroke.

A certain type of Marathi films, including the recent Jaundya Na Balasaheb, bank heavily on creating a village atmosphere and the characters that go along with it - villagers with a typical accent and who are peculiar in their own way. This feels heavily inspired by Pu. La. Deshpande's work, if I may say so at the cost of sounding blasphemous. It is now happening often enough for me to think that under the guise of “realistic” this has become a shortcut writing tool. It brings in the laughs, it makes the movie seem realistic. But it lacks depth on any count. Ventilator falls into the same type.

Sure, the hospital setting and selfishness of people are distinguishing factors. But, it is too uni-dimensional. Even as each character has only one facet of their personality exposed, there is broader black-white brush stroke. Almost all villagers have their own agenda even when someone they know closely is dying and almost all city dwellers know better, care more and so on.

Sure, some of the one-liners are way too funny. But, they are not cohesive, they don't bring the movie together. They look like something from a mimicry artist's script. In that sense then, the casting department has done a good job of finding apt mimicry artists. All the actors fit their characters well, making you laugh and cringe appropriately, annoying and exasperating you when needed, etc. Ashutosh Gowariker is almost playing himself too. He does alright, but whether he can really act will come forth only with more films.

Interestingly enough probably one of the most seasoned actors of them all, Priyanka Chopra, playing herself, is the weakest actor, even if it is a cameo. It doesn't help that she has some all-time lame lines – a couple of line were as lame as some of the other dialogues in the film are hilarious. 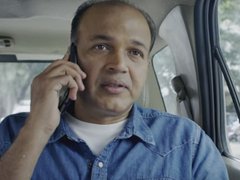 Anyway, the laughs dry out in the second hand as the mood turns sombre. Sermons take over that talk about the importance of a healthy relationship with your parent. The monologue in the climax is rather painful, the predictable melodrama that follows worsens things and makes the second half intolerable.

Ventilator then becomes a film that can be enjoyed for its laughs in the first half and it can be appreciated for an attempt at a different theme. But beyond that the writing department doesn't take the characters, sub-plots, relationships any further. This makes the film just about bearable.