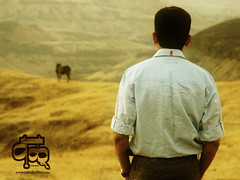 Valu takes you to the interiors of rural Maharastra with its adorable characters and their wit. It is a slow yet charming watch. However, you could get lost in translation if you don't understand the language.

Simplicity always feels good. Maybe because it is earthly or maybe because the very essence is lack of exaggeration. Valu's charming simplicity, however, in combination with its repetitiveness makes it a good watch but only for the very patient.

The most endearing part about Valu is its characters. And these characters add up to create the atmosphere of a village in the interiors of Maharashtra. The language has a strong dash of an every-day sense of humor. The rawness of the dialect adds to the overall appeal. But this could also keep it from being accessible to a larger audience.

Unfortunately, the language that defines the characters shows only one facet of their personality and thus end up giving a one-dimensional feel to each character. And make them not-so-interesting once you get to know them. However, I cannot take away from the fact that each and every actor has played their role in an utmost convincing manner, making you laugh and understand the one point they are trying to make. Right from the politician's sidekicks to the middle-class government worker (Atul Kulkarni) - each one enjoyable in his/her own right.

The screenplay takes its own sweet time in establishing these characters. And it has all the time in the world because there is no great story to narrate here. The baseline story is as one-line as it can get. The villagers want to get rid of a bull that has become a menace. But there are layers if you are interested in peeling them. Underlying the superficial "nothing happening" feel of the screenplay are a couple of strong themes.

Something about the way this one line is narrated makes you think about human nature. Is every human just trying to find some excuse to blame for his/her misfortune? "Is the bull really a menace?" Nothing about its behavior on screen justifies the behavior of some of the villagers. There are three people in the village who don’t want the bull to go. Why are they the only ones who are seemingly content with their existence?

Is the bull a metaphor for any argument concerning society - abortion, affirmative action? There are pros and there are cons. Or is the one-liner yet another representation of the mother of all metaphors - The system! Is the bull a metaphor for everything that deviates from normal behavior in the "system"? Most people want to be rid of it, while a handful doesn't mind the co-existence. As you can see, I am not very good with metaphors. All I know is the director is trying to say a little more than the obvious. And I think that's the inherent beauty of metaphorical work. It's open to interpretation.

Oh well, let's come back to what can be seen. The camera breathtakingly captures the curves of the rugged terrain. And in tandem, the actors are given a curving trajectory that gives the frames a captivating beauty. This is especially true in the scenes where the bull is being chased.

Yet, all this put together, Valu is only adorable and not necessarily a must watch for everyone. For people who can enjoy the language, maybe. But otherwise, without "really good" subtitles it might end up being quite tedious.

The villagers want to get rid of a bull that has become a menace.

Valu takes you to the interiors of rural Maharastra with its adorable characters and their wit. It is a slow yet charming watch. However, you could get lost in translation if you don't understand the language....

[...] at Without Giving the Movie Away reviews Valu, a Marathi movie. It’s been a while since I’ve seen a Marathi movie but such are the downsides of living [...]