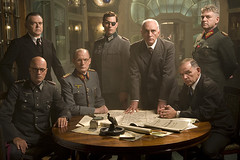 A historical with multiple characters and an intricate conspiracy plot that tend to clutter up the movie. Serious adult drama with no histrionics.

The film opens with black clouds roiling to a martial drum soundtrack and words appear on the screen indicating the historical period – Nazi Germany, 1944. We then hear the sounds of soldiers / officers swearing an oath of loyalty to the Fuehrer, Adolph Hitler, which then fades out against the backdrop of the Nazi swastika. These set the tone for what is to follow for the next two hours – a somber, sedate film which deals with a particularly interesting piece of German History during World War II.

With Tom Cruise playing the pivotal character, one expects the film to have its share of stunts and explosions. Allies beating the bad guy Germans and winning. Hollywood has been no stranger to such films, with such sterling examples like The Dirty Dozen, The Great Escape and Force 10 from Navarone.

But no, this film is different. What it does is to tell a story that involves dozens of assorted characters all of whom are drawn from the German army and have a common aim. The plotting is complex, and in the first half an hour the film shifts between Africa, Russia, and Berlin and in the process introduces some of the key characters. Tom Cruise plays Colonel Stauffenberg, a man dissatisfied with the state of affairs of the German nation. Others soon appear: Kenneth Branagh as Major General Tresckow, Bill Nighy as General Olbricht, Tom Wilkinson as General Fromm, and Terence Stamp as Beck. It takes some time for the screenplay to establish the main characters and their machinations, and then the plot begins to unfold.

Director Bryan Singer recreates the period meticulously, never does one get the feeling that an anomaly exists. The sets are detailed: Hitler’s bunker, the offices of the German army, and the streets of Berlin are very well setup. They look solid and very real and so do the uniforms. In keeping with the fact that the characters are all senior officers in the German army, the acting is controlled, there are no “applause” provoking dialogues nor are there long declamations and pithy sayings. The chief characters evince a quiet desperation as they go about their business; the strain is evident in the set of the jaw, the tightening of the mouth, or in some cases the innumerable cigarettes smoked.

The screenplay does not make us understand the motivations of the characters clearly; things are never stated upfront and blatantly. One gets the feeling that what is being done is in the interest of the German nation, at the same time some characters come across as ambivalent, or as sheer opportunists. This is an area that the screenplay struggles with: for the audience to identify and empathise with the characters, a degree of clarity as to their underlying motivation is necessary. The pacing of the film is unhurried at first, it picks up once the main characters are introduced, and then slows down again towards the end. The end is in that sense an anticlimax, most viewers have at least some passing knowledge of the events depicted. At the end, the viewer is left with a sense of futility at the turn of events depicted; a futility born out of foolhardiness that prompted so many men to risk their life for what is at best a nebulous idea( as it appears in the film).

To his credit, the director does manage to compel the attention of the viewer, in spite of the weighty script and the variegated characters. What suffers is the character development, an inevitable fallout of their sheer number, and the fact that he had to focus on the star, Tom Cruise. Cruise turns in a suitably restrained performance, his jaw line and his carriage point to the bottled up tensions within. The rest of the cast is good; Bill Nighy plays the man who teeters on the edge of indecision with panache. Kenneth Branagh and Terence Stamp are more than adequate in their all too brief roles. Tom Wilkinson is all bluster and jowl as the fence sitter.

This is a film that avoids all manner of excess but it also is one that leaves the viewer wishing that it could have had more soul to it.

A group of army officers plan a coup in Nazi Germany.

• The incredibly detailed recreation of the atmosphere of the period. • The scene in Stauffenberg’s house during a bomb raid; the flickering lights, the wobbling needle on the gramophone, the expressions on the faces of his family, all of which constitute a turning point in the character’s mind.

• The film seems too short at 120 minutes, another half an hour could have possibly added to the character development