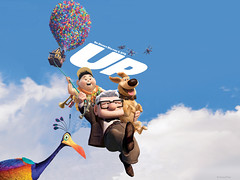 Up is a charming tale of discovering that love like Baskin Robbins comes in different flavours. It is a superbly animated flick about an old cynical man finding a reason to live… and love.

Every once in a while comes an animated film that makes you smile and wonder at the simplicity of the world that we once lived in as children. Disney Pixar’s Up is one such film. It tells the story of a widower Carl Fredricksen (voice of Jeremy Leary) and an eager beaver ‘wilderness explorer’ Russel (Jordan Nagai) who is dying to earn his batch for assisting the elderly.

Harassed by real estate sharks and ordered by the court to go into a retirement home Fredricksen decides to take off… along with his house floating on helium balloons and keep a promise he made to his wife long ago. Little does he know that he isn’t alone! The poor wilderness explorer is right outside on his porch and the two unlikely companions begin their adventurous journey.

The storyline of Up, as innovative as it sounds, and does tend to flag towards the end. In fact the last 15-20 odd minutes of the film almost drag as you know just what is about to happen. This predictability is the film’s most major flaw.

For most part however, Up is the charming and lovely fairy tale that it is supposed to be. It is also at a very basic level a reminder of how one can get caught up in the everyday and the mundane only to forget the dreams one has been living for.

Perhaps that is why the scene that you are most likely to love and associate with is the one where old Fredricksen hoists his house on helium balloons leaving behind a gloomy world that only runs behind materialistic possessions and lives in concrete jungles.

Unsurprisingly the only friend the widower finds is a ten-something-year-old Russell, untouched by malice, hatred and greed. This is a theme that could’ve taken the film to a new level. However some tacky portions in the screenplay and very poor storytelling ruins the fun. These are also parts that resort to clichés and are portions that make you want to walk out of the movie hall.

However if you forgive directors Pete Docter and Bob Peterson for these parts, Up is a very, very fine film indeed. Is it better than Wall.E? If you have liked the animated robot flick the year before last chances are you will like this one just as much if not better. It is a film that you must take your kids to and more importantly watch it yourself. If nothing else, it might just make you chase the dream you’ve been putting away for another day.