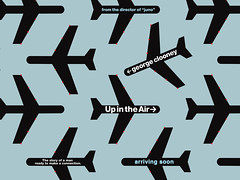 Up In The Air

Fast life, one night stands and frequent flier miles -- is all that the young today seem to want. And this is exactly what the film is about. Set in the sanitised world of airports and hotel rooms Up in the Air is a film that best reflects today’s youth and its aspirations.

Ryan Bingham (George Clooney) loves his work. He travels all over the United States doing the dirty job of firing people for bosses who’d rather not face their employees on the D-day. Bingham lives out of a suitcase, engages in one-night stands, is on the road for over 250 days a year and refuses to get into any committed relationship.

Life for the 40-something Bigham is about to change when two women (Natalie Keener and Alex) walk into his life, making question Bingham everything he has done and loved all along.

Up In The Air has been nominated for six Academy awards including Best Picture, Best Director (for Jason Reitman) and Best Actor (for George Clooney).

The film is based on the book by the same name and takes some liberties with the original plot. At its heart, the story of the book and the film remain the same -- they are both about a man living in the sanitised world of airports and hotel rooms.

Up In The Air released in the US at a time when the country’s economy was down in the dumps. Perhaps it’s one of the reasons why this movie has garnered much critical acclaim. By taking up the sensitive theme of lay-offs, Up In The Air touches upon the cold nature of American capitalism. It also takes a look at a man who derives his sense of being from car rental cards, hotel keys and whose only aim in life is to touch 10 million frequent flyer miles.

The mood of the film is quite like one of Clooney’s earlier films -- Michael Clayton. Only unlike Clayton, Bingham is no revolutionary. He is an ordinary man who is more than happy to tow the line and make some money in the bargain. What is it that makes him a hero then is what Up In The Air is all about.

Over the years, George Clooney has experimented with varied roles -- his last film was a comedy called The Men who Stare at Goats -- and has shown that there is more to him than the Batman days of yore. But Clooney’s performances as a down and out man-next-door are the ones that are perhaps most convincing; Michael Clayton is a classic case in point.

From the man who is seemingly in control of his life to a person who begins to question himself, George Clooney plays the role of Ryan Bingham more convincingly than anyone else you can imagine. Needless to say he holds the film together. The two women, Vera Farmiga and Anna Kendrick -- who have also earned nominations -- manage to hold their own too. Kendric who plays Clooney’s young coworker and an upstart out to change the world delivers a great performance.

While Farminga has little to do, she is the one that provides the film and Clooney’s character a much-needed turning point. The hitch however is that the chain of events is somewhat predictable. This is a big downer though over all, Up In The Air is a movie you won’t mind owning on DVD and the keener ones could do by going to the cinema halls when it releases in India.