An anthology where two of five stories are solid good-watches and the rest are more than satisfactory, while all of them have a setting that is close to home for each one of us—the pandemic.

While an anthology works better if there is a connecting theme, it doesn’t need to have one. Maybe two centuries later, the anthology in Unpaused could be called “Love in the Times of Covid”. For now, though, the title Unpaused seems just right. Life has paused at the superficial level, but has it really? A thing paused is not supposed to change the situation around you, it is not supposed to change you for sure. But, it has, no? Life is just being life, going on unpaused, irrespective of age, class, religion—throwing curveballs, teaching us how to handle them and move on, and so on.

Many little close-to-home observations about life during COVID-19 and life in general that make the experience endearing.

Each story also highlights a societal divide of sorts—gendered expectations, age, economic status, and value systems. The one that caught my attention and fear is the futuristic one pointing to a divide that doesn’t exist in its full-blown form right now, but can appear very soon if we are not careful—the one between the “paranoids” and the “non-paranoids”, “the front-line exposed workers” and the “rest of the world”.

Other than a life-altering pandemic, a few other common themes run through some of the stories. None of them magnifies or become about one solid issue. But a few of them touch upon mental health concerns like hypochondria and suicide. A couple of others have a part of the story revolve around loneliness, with specific attention to loneliness in old age.

Interestingly, the stories are spread over class divides, with a couple of them being about an affluent part of society, and another couple touching upon the pandemic’s impact on the lower-income strata and one working with the in-between, the so-called middle class. One can be even be viewed as set between tik-tok-makers and tik-tok-watchers. The gated separation between designer-mask-walas and handkerchief-turned-mask-walas, the gatekeepers literally wearing the in-between-donated-masks keeping the handkerchief-ones at bay while teaching them the new way.

Each of the five short films is about 20-22 minute long. So, it is unfair to talk about particular stories. All of them have absolutely wonderful performances, so I don’t want to slant towards some by naming them. Just know that if you are disappointed by any of them, it will not be on account of the actors. 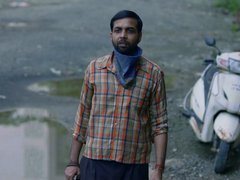 If watched individually, each story would have had an equal appeal. But when set up one after another, the first two might set an expectation for a certain pace and start-middle-end type of a story. With these, you feel like you are watching something that happens to others while it is commenting on your life through some brilliant satire and societal situation. The last three are slice-of-life stories, with not one character you couldn’t imagine in real life. But they don’t have a sharp story or character arc. Of course, in some sense, they are all coming-of-age, but then almost any story is, right?

From the futuristic Glitch to The Apartment’s direct pointer at mind-bogglingly flawed gender roles to the simplicity of Rat-a-tat, Vishaanu, and Chand Mubarak, Unpaused makes many little observations about life during COVID-19 and life in general. They are especially endearing because they are so close to home. The only glaring thing it leaves out is the covidiots who refuse to take the virus seriously, those we see all around us. But then, that’s what makes it a hopeful film too.