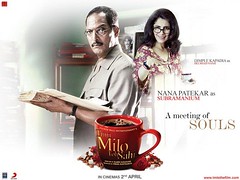 Why do decent story, sweet characters played by wonderful performers have to so often be marred by a crappy climax? Why-o-why-o-why?

Like many themes converted to films, mechanical corporate sharks wanting to take over a warm, cozy place associated with a lot of emotions, is not new. But Tum Milo Toh Sahi makes a genuine effort to make it meaningful. The emotions are not superficial, you identify with the characters. And yet you are not rooting for the protagonists and neither do you want to take the "wrong-doers" to court.

Tum Milo To Sahi is a little bit about a lot of things. The most obvious one is a comment on disregard to saving the country's heritage by both its government and citizens. The "metropolitan corrupting small-town simple-mindedness" take is hard to miss too. Then you have ambitious characters being judged as greedy and insensitive under the mask of westernization. Society's lack of sympathy towards an unmarried mother is frowned upon too.

So much to say, so little time. And thus, everything is said in a rush and the audience can't engage in anything at all. You watch with interest but no involvement. And there are a few things to hold your interest in place almost till the end.

Dimple Kapadia and Nana Patekar's acts are completely spell-binding. Dimple Kapadia, in fact, reminded me of her character in Saagar. Buoyant and sensitive, loud and thoughtful, street-smart and direct. Nana Patekar does his usual frustrated common man deal, and does it well. The rest of the actors though are completely out of the veterans' league, though. Especially the kid who over-acts notwithstanding his over-done Australian accent.

I enjoyed the set-up in the beginning too. The camera-work and way of introducing characters was different and pleasant. Usually I get annoyed in a film with hardly any long shots. But, this one it didn't disturb me. Though I think I'd have grasped the characters better if I was shown their environment every once in a while.

The story is also played out and connected between the numerous characters pretty well. Despite the predictability, the piecing together of the different sub-plots is fun to watch. But alas, all goes phut in the last 20 minutes. All logical reactions given their characters go for a complete toss losing head and tail. Characters transform like they attained nirvana overnight. And soon enough a nice film becomes eye-roll material.

The lines are fun but only sporadically. The preachy ones are more than what one wants to hear for entertainment or education.

However, the lyrics of the title song are a pleasant surprise, especially considering the other mediocre writing in the film. A comment on the vacant space in relationships and general human disconnect with each other is insightful.

It's disheartening that the last 20 minutes can undo the work of the first 110 so badly. This one will make a decent-enough watch when the DVD is out or when it has a TV release. Till then, IPL??

Thumbs up, by Bobby Sing, Bobby Talks Cinema.com : ...Another noticeable merit of the movie is Vidya Maldave who looks stunning in the role of Suniel Shetty’s wife and acts like an experienced master of the art.... full review

Thumbs up, by Martin D'Souza, Glamsham.com : ...Director Kabir Sadanand churns out a likeable plot that is sure to tug at the hearts of those from 18 to 80.... full review

Thumbs up, indiaserver.com : ...To add some colorful shades onto it the director Kabir Sadanand has implied comical theory to it to take it into a lighter note.... full review

Thumbs up, Movie Talkies : ...Upper middle class families will swiftly identify with Suniel Shetty's character, a persona with gray shades to it. Suniel's portrayal of Amit is one of his finest, till date. ... full review

Thumbs up, by Subhash K Jha, Now Running.com : ...Sadanand gives all his principal actors room to blossom. And that includes the third generation pair Rehaan Khan and Anjana Sukhani who are just discovering life and love... full review

Thumbs up, by Nikhat Kazmi, Times of India : ...The two veteran actors create such a warm picture of humaneness, warmth and togetherness, it leaves you asking for more... full review

So-So, by Aparajita Ghosh, Apun Ka Choice : ... The songs could straightaway be axed from the film, and the courtroom drama in the second half does look a tad farcical at times.... full review

So-So, by Baradwaj Rangan, Blogical Conclusion, The New Sunday Express : ...the only time the screen lights up is in the presence of the seniors... full review

So-So, by Shweta Parande, IBN Live : ...The background music in the film changes with the three tracks and is loud. ... full review

So-So, by Gaurav Malani, indiatimes : ... From the pairing, the elder-most twosome is the most enjoyable, middle-aged couple most irritating and the young duo almost inconsequential. ... full review

So-So, by Tushar Joshi, MiD DAY : ...Both Dimple and Nana are outstanding and fill every frame with their natural effervescence... full review

So-So, by K K Rai, STARDUST : ...he ease and comfort with which Dimple has enacted the part is amazing. Her courtroom sequence showcases her acting prowess perfectly.... full review

Thumbs down, by The Narcissist, A Fine Imbalance : ...A “specimen” of modern art because the gargantuan canvas is splashed with every single stereotype one can think of in metropolitan India... full review

Thumbs down, by Deepa Garimella, fullhyd.com : ... The story is less of a full-fledged plot and more of a loosely strung series of individual situations.... full review

Thumbs down, by Mayank Shekhar, Hindustan Times : ...If you look beyond the fringe, which is most of the film, the premise, made hash of, is quite pertinent after all.... full review

Thumbs down, by Udita Jhunjhunwala, Live Mint : ...But somewhere between the bun-maska and the cookies, the screenplay gets overcooked.... full review

A lot can happen over coffee? Bluebells, a coffee chain, has its nasty corporate eye on warm and homely Good Luck Café. How will the owner save her first child, this café?