So, so many difficult issues dealt with a light, matter-of-factly hand. Lots of ground covered in a breezy 90 minutes without being rushed. An engaging watch from start to finish.

It has been a while since a film threw my scepticism off despite a slow start. Once Tribhanga starts going, you want every potential interruption to hold its horses till the film is over. Over its quiet first half-hour, it opens many threads, and I wanted to know where each was going and how they’d wrap it all up in just another hour. All my questions were answered.

It mattered little whether I agreed with the answer because it is conveyed convincingly. I know, I am making it sound like a thriller of some sort. The film casually inserts a woman, with a clearly feminist grandmother and an obviously loud-mouthed mother, meekly respond to her mother-in-law’s call. And it niggles at the back of your head until it is addressed. Of course, it is foreshadowing and had to be resolved, but the film doesn’t create drama around it. It comes up in a casual conversation like it would in my living room.

And this is just one instance. Tribhanga picks up on the nuances that make up the texture for many an Indian relationship, from the little things like connecting with people through food; to larger common occurrences like a newborn being used to convey power dynamics in a family; to more uncommon instances that are indicative of a thematic issue like women suppressing their emotions despite being brought up in a modern environment.

The cast is a lovely mix. Tanvi Azmi has a reassuring presence even when Nayan, her character’s insecurities and flaws peek out under her mask of confidence. In fact, Kajol does quite the same with Anuradha, Nayan’s daughter. She does get into her shrill self every once in a while, but Anuradha’s anxiety and discomfort seep through her brash and crass self. Especially noticeable was a moment with a nurse in the hospital and when she sees demons from her past. Mithila Palkar playing Anuradha’s daughter, showcases Masha’s resilience from the word go. Kunaal Roy Kapoor’s Milan is unassuming in demeanour but also carries a dominant presence through the film.

The characters have been written as well as the overall story arc and the details. Almost all characters impart philosophies, yet the film doesn’t feel overwritten. Sure, it starts slow, allowing Anuradha’s resentment toward’s her mother to build in the audience’s mind. It becomes a little repetitive too. But never out-of-hand enough to get boring. 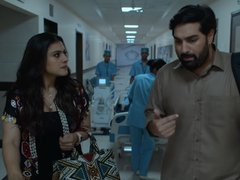 Tribhanga also accommodates many important themes under its wings. Patriarchy is the biggest running theme. The film also points to the weird ways in which life comes a full circle. Both grandmother and granddaughter have mother-in-law issues. The other themes include bullying, sibling bonds, nature versus nurture, child sex abuse, live-in relationships, open relationships, polygamy, religious freedom, and gender determination tests—all of this fit snugly in 90 minutes, neither squeezed nor force-fitted.

Ninety minutes spent well on watching something wholesome and satisfying.

Thumbs up, by Madhuri V, Filmi Beat : ...Yunhi baithe baithe soch rahi thhi kya ab bhi koi jeena baaki hai. Hai abhi bhi bahut peena baaki hai." With her sweet-and-salty take on imperfect mothers and difficult daughters, Renuka Shahane has made a promising debut as a filmmaker when it comes to Hindi cinema. It would be interesting to watch what the director has in store for us when she wields the megaphone next time.... full review

Thumbs up, by Shubhra Gupta, indian express : ...Shahane is much more assured when it comes to her women. They deal with each other’s troubles and foibles, are allowed to make mistakes, and forge their own paths. That’s pure pleasure.... full review

Thumbs up, by Saibal Chatterjee, NDTV : ...Tribhanga, a genteel, appropriately unfussy ode to women who are unapologetic about what they want, merits three cheers - and more.... full review

Thumbs up, by Vaibhavi V Risbood, Pinkvilla : ...This is one of the films that doesn’t drain the audience. It involves them, making them reassess their judgement of relationships and evoking the need to give a second chance to those we once loved the most.... full review

Thumbs up, by JOGINDER TUTEJA, Planet Bollywood : ...That said, you don’t have to get distracted by anything else whenever Kajol comes back on the scene. Effervescent as ever and remarkably turning back the clock to the 90s in the looks department when the story moves back to that era, she makes one sigh all over again that this is an actress who is still out there ready to play the leading lady roles.... full review

Thumbs up, by Sonia Chopra, Sify Movies : ...This film is such a delight as it offers a layered and heart-warming story encompassing three generations of women. Also commendable is how beautifully it portrays real women and humanizes mothers with all their flaws, mistakes, strengths and weaknesses. Like the tribhanga pose, the three women are at different angles, yet their stories come together to form something truly breathtaking.... full review

Thumbs up, by Debasree Purkayastha, The Hindu : ...However, as we inch towards the finale, the actor returns to her luminous self. Watch out for a beautifully-enacted segment between Anuradha and her mother Nayantara, where the fragile frugality of emotions is heartfelt. If only there were more such scenes to root for...... full review

Thumbs up, by Stutee Ghosh, The Quint : ...But the film redeems itself soon with how smartly it has been sculpted together. The camera doesn’t unnecessarily linger on, the same point isn’t drummed repeatedly and avoids any grandstanding. The self-assured storytelling in Tribhanga by Renuka Shahane that is masterfully woven around wholesome characters gives us much to cheer for.... full review

So-So, by Rahul Desai, Film Companion : ...I must also mention the misguided final shot of the film, without spoiling it for anyone of course. It’s the trippiest shot ever – with the camera zooming into a frozen family portrait in which a character is seen holding a book whose cover is this same family portrait. So the camera goes into an infinite loop of zooming into the book and the portrait; it goes on for so long that the cyclical metaphor gets lost in an optical illusion of dizzy drunkenness. The drunkenness that comes from a cheap rum, not a fine scotch. Even the scotch is screaming, but we’ll come to that later.... full review

So-So, by Devesh Sharma, Filmfare : ...All in all, while Renuka Shahane has made an all-heart film, it’s something of a work in progress, rather than a finished product. But it’s a fine beginning nevertheless and she holds true promise for the future.... full review

So-So, by Soumya Sriwastava, Hindustan Times : ...Tribhanga may have turned out better in a different world but a lot of things would have to be changed to make a positive, strong difference. However, as Nayan says in the film about her parenting choices, she does wish to go back and do things differently. But she cannot. All she can do is apologise.... full review

So-So, by Nandini Ramnath, Scroll.in : ...Like Milan, Shahane too plays the role of peacemaker and bridge-builder, forcing three divergent positions to point in the same direction. There is much in Tribhanga that lingers, but also a great deal that doesn’t quite come together.... full review

So-So, by Renuka Vyavahare, Times of India : ...The idea behind the movie is inspirational but ideas aren’t enough unless they make for a riveting viewing experience. If you haven’t, watch Shahane’s ‘Rita’ instead.... full review

Thumbs down, by Sukanya Verma, Rediff : ...Actor turned writer/director Renuka Shahane's comfort in sentiment shows but her confused stance on emancipation of women is a big let-down.... full review

Dear Meetu, nice review. When I had seen the trailer - I found the movie - very high pitched and verbose. But after reading your review, I am inclined to see the movie. Thanks

Raj has given this movie a Want to Watch(Slow silent 1st half - answers in 2nd half - interesting). Raj has posted 76 comments and has rated 44 movies. See Raj's page for more details.
meeta

Yes, it is certainly less shrill than I expected it to be. Do let us know what you thought of the film. Will be nice to have another perspective :D