The Trial of the Chicago 7

It is telling that the film is a necessary reality check today.

A court case about America’s role in wars in the rest of the world. A trial about war in general. A look at looming internal problems—from racism to partisanism. Thankfully, The Trial Of The Chicago 7 does justice to the injustices it wants to highlight. That the horrifying face of racism runs parallel to the trial of the Chicago 7, in itself, makes the film as much about ‘black lives matter’ as it is about ‘the Chicago 7’.

The makers were not just telling yet another story, they were making a political statement.

Did I know about the trial before I heard of the movie? Nope. Turns out neither did Aaron Sorkin. Sure, the film is only a cursory glance of what might have transpired in real life, it presents only one point of view and it dramatises events for effect. Even so, I didn’t have many complaints on any of the three counts.

While I might know every single detail of the trial that went on for months, a couple of scenes highlight why people on the same side are at each others’ throats. Their background, their privilege shape their take on how they deal with the same beast. Even the ones who are fighting against injustice don’t realise how biased they are against something that they think is the “other”—cultural approach, in this case.

While only the liberal point of view is presented, the film cracks open how deep the biases in society ran, back then. And it unmistakably holds a mirror to how the depth in bias has held its ground till date. The parallels are as clear as they could be and just in case you were wondering, you are spoon-fed to lay your doubts to rest.

And there comes the dramatisation. You cannot possibly walk into a Sorkin film and not expect drama. Snappy quintessential Sorkin lines are the very veins of the films he writes. Such dialogue does not happen in real life. Sure, I prefer quiet films that allow the audience to draw its own conclusions. But if a movie has to use words, I prefer the Sorkin-way—rich conversations, smart characters exchanging articulate thoughts with no room for riff-raff. The exchanges are so craftily executed that the too-perfect-to-be-true rhythm slips by on first watch. 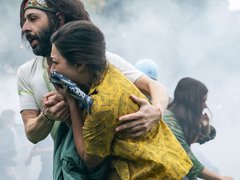 From The American President and The West Wing; to Jobs and The Social Network; through A Few Good Men has worn its quick retorts and its liberal attitude on its sleeve. No one talks like they do in these films. But, who are we kidding? Such interactions make everything Sorkin writes engaging, from the first word to the last.

Yet, the thunder is stolen by the film’s relevance to the growing division in today’s society, across the globe. This hit hard—democracy is meaningless if the people in power think of it as their privelege, one clearly not to be enjoyed by others—it is not democracy any more. Throughout the film, it felt like something personal was at stake.

Does justice to the injustices it wants to highlight.

The performances make you wonder if the subject was enough for the resonance though. Each one is indeed better than the other, only to come back to the first one being better than the last one. In such a large ensemble, it wouldn’t be fair to pick one or two names. All I can say is I knew when a character was controlling his seething temper, or when two were frustrated by the other’s intellectualism/hippy-ness, or when an actor had scorn and anger coming his way, or when another character was doing his best to agitate the audience. Yeah, very few hers in a movie set in the late-60s.

At the same time, the film doesn’t stay with you only because of the actors. The makers are not just telling yet another story, they are making a political statement. Sure, there is a movement in the correct direction from when the film was released and today. It is telling that this is still a necessary reality check.

The Trial of the Chicago 7 - Cast, crew, links

Thanks Meeta for being back. I will try to watch it. Was waiting for you to put a new review, and loved it....

@Raj :) Happy to be back. One Friday at a time. Do watch and let us know what you thought.

Welcome back! Chicago 7 is my favorite movie so far this year. Sorkin is a beast! Also check out this year's Mangrove which is a serious version of a similar trial called Mangrove 9.

moviefan has given this movie a Yay! Thumbs Up. moviefan has posted 23 comments and has rated 13 movies. See moviefan's page for more details.
meeta

@Roy Thank you! Will watch Mangrove! Thanks for the recommendation.