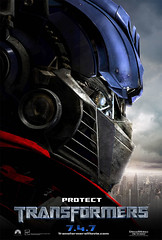 This is yet another summer movie, but one that purports to be even better and bigger in terms of special effects or CGI as they call it these days! (Aren’t they all!)?

Directed by Michael Bay, he of the big budget, louder than ever, a crash a second movie genre, Transformers is trite, banal, and hackneyed. Based on a set of toys made by Hasbro and which were popular around twenty years ago in the US of A (aren’t there better sources of inspiration around?), Transformers is all about machines, machines, and more machines. The movie is a wet dream for technology freaks and for those who dream of absolute power through technological domination. We have lovingly shot sequences of planes, tanks, and guns, all black and glistening, hard and throbbing, and filled with deadly intent. We have shots of alien robots, which are amazingly anthropomorphic, (how come, if they are machine intelligences from an alien planet) right down to their lubricating fluid outlets (did you get that one?) metamorphosing themselves into sleek transport machines – trailer trucks, a Ford Camarro, a fighter jet and other unnamables, lest viewers get bored even for a second. And to make up the rest of the film, we have action scenes involving robots and men, robots versus robots, and robots running amok in the deserts of Qatar destroying good old American military technology.

Yes, there are a few humans scattered in the film, but they are largely inconsequential. We have the nerdy Sam Witwicky, who has something that the alien robots want and which is hidden in a top-secret location, and we have the obligatory local female hot bod Mikaela Banes, and we have Sam’s parents, and of course, his pet Chihuahua. We have Jon Voight playing the Secretary of Defence, (in what must be the lousiest role of his career) substituting for a shadow President.

What we do not get is a reasonable plot, character development, and a rationale for all the destruction we see on the screen. The film is tedium personified and all the special effects by Industrial Light and Magic cannot save it, as I just could not relate to any of the characters.

Yes, the humans end up saving the world and setting things right, but none of it was of any interest to me, as I have seen it all before. The camera jerks amazingly in the action sequences, as if the cinematographer was trying to convey an out of the body hallucinogenic experience to the viewer.

The sub text is all about America and American technology saving the world, the automobile as a pumped up phallic symbol which would set women drooling and leave men free to do what they really want, which is to have sex with attractive women. To complete the picture, we have the embodiment of the techno freak fantasy of humans coexisting peacefully with technology that they themselves have created, but which has become so complex and mystifying, that now it is totally alien.

The movie cost something around 150 million dollars, so the word goes, and one wonders whether a larger fraction could have been invested in a bound shooting script and getting hold of real actors! The audience for the film is assumed to have an IQ slightly smaller than their shoe size, well, so I guess that does not really matter. The pre pubescent crowd might enjoy the film given that there a few jokes about the masturbatory habits of young, pheromone oozing males, and a scene where Mikaela drapes herself on Sam’s automobile hood, inspects the engine, and makes appreciative noises about pumps, heads, and power!!

IT'S A ROCKING ANIMATORY MOVIE IN THE HISTORY OF HOLLY.

THE PIC. FROM START TO END IS SO CREATIVE DAT THE AUDIENCE ARE NOT GETTING BORED AT ALL....

THE MOVIE INCLUDES COMEDY,DRAMA AND ACTION TOO..

AS MANY TIMES WE CAN WATCH MOVIE..WE NEVER GET BORED..