Wally Pfister's Transcendence is a film that has a lot to say, but doesn't try too hard to say it. Behind the sci-fi story lies questions about the fundamentals of humanity itself. The film doesn't try to hard to make the audience like it, which is perhaps why it is unlikely to gain much love from the audience.

Wally Pfister – Christopher Nolan’s long time collaborator as cinematographer – makes his directorial debut with Transcendence, and the first word that comes to my mind to describe this first film he gives us, is ‘strange’.

Transcendence instantly slots itself into the sci-fi space. But the sci-fi element is mostly relegated to the background. While one can’t say that it has been dumbed down per se, it just exists like gentle fumes behind more philosophical and moral themes that the film talks about – about the dangers of fusing technology with human thought, and to what limits a humanity can go to, once such powers are in our hands.

It is also a human drama of sorts. Except, there is nothing dramatic about the film. It doesn’t particularly have a graph or a journey for the characters – at least not in the usual cinematic sense of an arc. Then of course, it is a thriller. Yet again, though, it is a thriller that doesn’t thrill outright. It doesn’t have peaks and moments that leap out to shock you. It makes do with just a sense of foreboding – making you wait for something to happen; that something never really happens. It expects you to be content with the journey, not the destination. 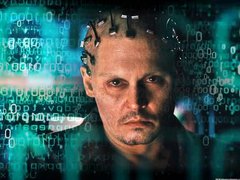 Lastly, it is also a strange sort of romance – where the lead pair hardly ever spends screen time together, and the love they share transcends everything that we’ve come to accept as ‘normal’. This, I suspect, is one of the reasons behind the film’s title, though there is also another reason that is given in the film.

Transcendence is about an extraordinary researcher named Will Caster, who is on the cusp of taking artificial intelligence into uncharted realms. However, a fringe group of activists is against empowering machines so much. The clash between these two streams of thought eventually leads Caster on to something much bigger than anyone ever hoped; and then Will and his wife Evelyn are separated in a manner they never even dreamed of.

It is interesting, the manner in which Pfister treats his film. An old school man, Pfister shoots his film lovingly, on film. The grainy look hardly ever betrays that the film is actually about high end, ultra radical technology – a strange sort of paradox. He is in no hurry to tell his story, so the pace of the film never ever picks up. It just unfolds slowly, and then it ends.

He uses extreme close ups, a number of them abstract, to slow the film further. There are times when it seems like an effort to actually alienate the audience from the film, and in that, the film succeeds quite often – Transcendence is unlikely to win too many fans, because, very crudely put, nothing much happens in the film.

Nothing in the film is outright impressive at any level – be it in terms of the plot, the treatment or even the technique. (One audience member even called the film ‘boring’.) The audience can’t quite be faulted here, because one can see that Pfister had no intention of impressing the audience ever.

Transcendence is slow poison. Neither does it force the audience to think about the questions it raises, nor does it try to blow their mind with the character of Will Caster and where he ends up. With its unusually staid pace, you end up forgetting the important moral implications of the power of human intellect, which the film holds at its core.

It is this core of the film, however, that needs one to take an earnest initiative to truly understand. The film, essentially, has no body. It does, however, have a soul. And souls, we’ve come to believe, live forever. I suspect, then, that it is the sort of film that, in time, will find an audience. The audience of today though, I’m sure, is likely to reject the film.