The World Before Her

Nisha Pahuja’s The World Before Her will make you uncomfortable, it will urge you to question what you know and believe, and it will shame you for being a part of a society that doesn’t fundamentally understand that men and women are equal; that such a question being raised itself is a mark of how undeserving humanity is of the world it inhabits.

Who decided that a woman must fight to prove herself worthy of existence? When was it decreed that women are, in any way at all, inferior to men; that their lives mean only to be daughters, wives and mothers? Why is that even today, in a world that has seen humankind create unbelievable miracles – so many of them by women – we still have to ‘reserve’ places for women in government or in other organizations? Why is it that even urban, educated India has different standards for men and women?

I must have been all of 5, maybe less, when I first heard the ‘saying’ that behind every successful man there is a woman. It rankled back then, and it still does. We’ve all seen, over the years, how women are the ones blamed for ‘degrading our culture’, chastised for ‘stepping out of their boundaries’, questioned for possessing ambition, and even physically attacked for ‘embracing Westernization’. If all of this sickens you, then Nisha Pahuja’s documentary, The World Before Her, will hit you in the gut. It hurts like few other films in the recent past.

There are two extremes in India – the modern, urban, high-flying but often ugly world of unbridled personal ambition; and the traditional, conservative, fiercely insecure India that guards its past far more than it welcomes the future. The World Before Her juxtaposes the two, with the most objective possible view of the place of women in both worlds. 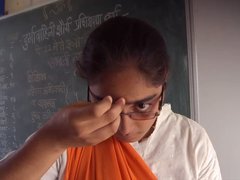 Ruhi is a girl barely out of her teens, from semi-urban India; a girl who aims to make it big at the Miss India pageant. Prachi, on the other hand, is a young instructor at Durga Vahini, the women’s wing of Vishwa Hindu Parishad – the self-appointed custodians of Hinduism (or Hindutva, as they’d prefer to call it.)

As we take a look at Ruhi’s journey – which represents that of so many like her – at the unforgiving, relentless training they have to undergo at beauty pageants, you can’t help but feel sorry for the fact that so much of a woman’s self-worth is determined by her external appearance. True, there are pageants for men as well, but they rarely ever claim the spotlight the way a beauty pageant for women does. So strange that a society so unashamedly patriarchal finds a competition that pits women against each other on the basis of their looks far more appealing than one for men.

Prachi’s tale, on the other hand, scares you. Here is a girl who is thankful to her parents for letting her live despite being born a girl, because of which she willingly embraces harsh, physical punishments from her father; a girl who derives an almost perverse pleasure because of her power and domination over the young girls, many of them teenagers, who she trains at the Durga Vahini camps. There are times when these camps almost feel like militant training camps; their acceptance and belief in violence as a solution against the enemies of Hinduism – the big monotheistic religions of the world, Western culture and the likes.

Most people will find sympathy in at least one of these faces of India. The ones who fall in the middle, those who feel uncomfortable by the questions that can be asked of both these schools of thought, are the ones who will be most affected by the film. Both these worlds, though starkly different from each other, find parallels in each other as well.

Diction expert Sabira Merchant, who trains Miss India contestants on the way they speak during the preparation rounds for the pageant, refers to the pageants as ‘factories’, which churn out polished, modern Indian women. The Durga Vahini camps are also like factories, spawning hordes of women who can raise fight if the time calls for it. Both worlds have precise routines, specific methods and a rigid structure that participants just can’t break free of.

While Ruhi, Prachi and the other girls we come across in the film are representative of the journeys that women like them follow, they also become characters we invest in. It is hard to miss the moistening of Ruhi’s eyes when she talks about her dream of becoming Miss India and making her parents proud. It is extremely difficult to not view Prachi with a mix of apprehension and sympathy, when she talks about how she hates girls who are too ‘girlish’. And do look closely at Ruhi’s face and the subtle changes you see in it as the film progresses – you’ll see how her Miss India preparation took a biologically-induced toll on her beautifully flawed natural face as well.

Interestingly, the documentary is almost crafted like a thriller. It switches between the two worlds smoothly, and as it goes on, you’re almost holding your breath, wondering what happens of the women we meet in the film. You wait to see where their respective journeys lead them; and as the two paths merge into each other, you’re left stunned, but with nagging questions that will haunt you. Almost like how children, when looking at a television, wonder if they’re looking at people in a world inside a box, or if the people inside the box are looking at them and at the world outside.

The film restricts itself to the way women are perceived in the two contrasting worlds, but if you think about it, it also questions the two worlds itself. Which is the real India? Is ‘Western culture’ a threat to our own rich heritage? Or is culture a dynamic and evolving construct that has no option but to change as time passes?

How is it that a woman can stand before a massive audience comprised of other women, and fiercely speak of how a woman isn’t supposed to think of a ‘career’? On the other hand, in the so-called modern, liberal world of the pageants, the women are taught how to stand, walk, talk and twirl. Their legs are supposed to be a certain way, their chins are supposed to be a certain way. Fingers, toes, wrist, neck - everything has a fixed position to project confidence and personality. Doesn't sound so liberal now, does it?

Another terrifying thought you take from the film is just how communally charged a country India is. Day-to-day life might seem peaceful, but that there literally are armies being trained by the majority community in the country is scary. It makes you wonder if the minorities have similar notions and ideas. All of this is simmering below a facade of relative harmony. When it will explode is anybody's guess.

The World Before Her is the kind of film that you can write and talk about for longer than you can imagine. Hence, it is also an important film; the discomfort which it engenders being a measure of which face you represent, of the ugly world we live in.

The World Before Her - Cast, crew, links