Romance against many odds. An underdog story which, by definition, is against all odds. A comment on societal rivalries. None of the themes is fresh. Unfortunately, they don’t make the whole better than the parts as they come together, despite being woven together well.

Is it even a boxing film if the countdown doesn’t reach 9 before the almost knocked out player begins to rise up? Here Aziz Ali, aka Toofan, is up at 7. And that is representative of the film, Toofan. You can predict what’s coming, even though it tries to be slightly different from what we are used to. Therefore, across all its themes—romance, sports, national integration—Toofan engages just about for you to confirm what you had expected to come true.

While the performances and the action are contributors, the number of themes and their interweaving play a major role too.

Once you know that you won’t be shown anything dramatically new, you will be keen to watch the film only if the performances, the sports action and the film’s ambience are interesting. Toofan delivers a decent show on all counts, but not a spectacular one.

Mrunal Thakur has an easy presence and leaves you with a warm feeling for her character, Ananya. Supriya Pathak and Mohan Agashe too create a charm whenever they are on screen. Paresh Rawal induces annoyance, which I assume was the intention of the character. You can’t shake out the knowledge that Farhan Akhtar is Aziz Ali for the first half-hour or so, but eventually, he gets in the groove. His act holds attention, particularly in the last 40-45 minutes of the film.

By then, though, two-thirds of the film has passed. One too many a song, one too many a dull sequence—mainly because you know what’s going to happen next—leave you only marginally engaged with the story. That could be considered the film’s win. Despite, the monotony it keeps you engaged, even if a bit. While the performances and the action are contributors, the number of themes and their interweaving play a significant role.

The question then is, can a film be watched just for how it weaves a few themes together? Are good intercutting, the music that plays to the beat of the boxing shots and such subtler aspects enough to make you spend 160 minutes on the film? Especially when it includes two training and romantic montages, each that have very little novel about them. 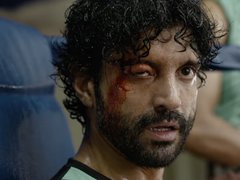 It did feel like the central theme is the Hindu-Muslim angle, and everything else is made to revolve around that. That is hardly trail-blazing. We have been seeing that for decades now, if not almost the whole century of Hindi cinema. Which makes it a shame that it is necessary, no?

Thumbs up, by Subhash K Jha, Bolly Spice : ...Put this film on your-must see list this weekend. It is Rakeysh Mehra’s best since Rang De Basanti. And that’s saying a lot.... full review

Thumbs up, by Vaishali Jain, India TV : ...When you first hear that a project brings together Farhan Akhtar and Rakyesh Omprakash Mehra which is billed as a sports film your mind instantly recalls the magic they created with Bhaag Milkha Bhaag. Toofaan for sure doesn't match up to the brilliance the duo presented with the biopic. However, it's a feel good theatrical that you would have enjoyed watching in closed dark spaces of cinema halls munching on popcorns. You can still enjoy the film if you admire Bollywood, not sure if it can satiate your love for boxing though. You might go in for your love for Bollywood movies but you'll leave with an impressing note for Farhan and Mrunal.... full review

Thumbs up, by Shubhra Gupta, indian express : ...As Toofaan, Farhan’s footwork is bang on, whether it is in the stroppy romance with a girl far removed from his station, the impressive glistening-muscles-straining-in-training scenes, the skilful jousting, complete with the spray of blood, rattled teeth and swollen eye, during the bouts. It is his game, and he is on top.... full review

Thumbs up, by Sushmita Sen, NewsBytes : ...However, until the second half of the movie, you may expect an interesting yet predictable ending, but the storyline fails to keep you hooked. The first half is fantastic though and Akhtar is brilliant in the film. He surely deserves extra points for his outstanding performance.... full review

Thumbs up, by Vaibhavi V Risbood, Pinkvilla : ...Despite the slacktivism over whether you should revenge-watch or totally ban Farhan Akhtar starrer Toofaan, Rakeysh Omprakash Mehra’s film is a feel good sports drama that will keep you entertained. Honestly, the job of a critic is to judge whether a film merits the audience's time regardless of the controversy around it; and this one does.... full review

Thumbs up, by JOGINDER TUTEJA, Planet Bollywood : ...Overall, Rakeysh Mehra has delivered a major winner. He is so much in form here. Along with his editor, he has done well to tell this lengthy tale convincingly which shows that he had good content to be narrated entertainingly. He has made a film that unfolds like an epic and goes beyond the conventional. He has made a film that entertains right through and delivers a punch. Pun intended!... full review

So-So, by Devesh Sharma, Filmfare : ...All-in-all, watch Toofan for the inspired acting by Farhan Akhtar, Paresh Rawal, Mrunal Thakur and the entire ensemble cast. They have uplifted the film through sheer force of will.... full review

So-So, by Madhuri V, Filmi Beat : ...Shankar Ehsaan Roy fall short of delivering a memorable music album with Toofaan. Nevertheless, there's one song, D'Evil's 'Dekh Toofaan Aaya Ha' which stands out in the crowd and gives us the much-needed adrenaline rush. The rest of the songs are passable.... full review

So-So, by Vibha Maru, india today : ...Toofaan is somewhat redeemed by its commendable actors. Paresh Rawal stays true to his character of a stern, stubborn coach Nana Prabhu. Mrunal Thakur is watchable as an honest doctor and a supportive partner.... full review

So-So, by Ambica Sachin, Khaleej Times : ...Now we would have paid good money to watch a movie purely on his transformation from a light-hearted roadside tapori to a boxer with a killer instinct inside the ring, Toofan. As it stands Toofan proves to be a mere storm in a teacup. At 2 hours and 40 minutes, this is one bout that may test your endurance levels.... full review

So-So, new movie : ...oofaan has action, romance, drama, emotions, and everything that a commercial entertainer needs. The performances from the lead characters & the music were highly impressive. The story of this sports drama was a bit predictable, especially the boxing tournaments, and both finals. Also, the focus shifted towards many other issues that might make you a bit upset... full review

So-So, by Gautaman Bhaskaran, News18.com : ...Beyond this Toofaan has little fire and fury that one would expect from work on boxing.... full review

So-So, by Sukanya Verma, Rediff : ...And there's Paresh Rawal sounding shockingly authentic mouthing lines closer to his personal political beliefs. He says the most profound things about boxing and deplorable things about people showing a man at his best and worst. He finds a balance between his art and his politics.... full review

So-So, by Sonia Chopra, Sify Movies : ...The film takes you back to numerous films from Rocky to Bhaag Milkha Bhaag to Sultan. You also think back to Gully Boy with the rap songs and Vijay Maurya’s Mumbai slang-induced dialogue.... full review

So-So, by Sangeetha Devi Dundoo, The Hindu : ...Had Toofaan been taut and tried to circumvent staid sports drama tropes further, it would have been worth rooting for. The only thing that sets this film apart is the social commentary (‘love jihaad’ finds a mention), reflecting how tough it can get for a couple to retain their respective names and identities and still dream of a life together.... full review

So-So, by Renuka Vyavahare, Times of India : ...Overall, Toofaan may not be the cyclone you may have expected it to be but it definitely has its thundering moments.... full review

Thumbs down, by Stutee Ghosh, The Quint : ...The only time Toofaan truly comes alive is when the focus shifts to Aziz’s relationship with Ananya. The prejudice and bigotry that the two suffer is tragic and for sometime it feels like the film is finally on track giving us a brave and poignant account of how divisive and politically charged the atmosphere is. However, in its eagerness to impress all, the film simply abandons this narrative track and dilutes its own message thereby making Toofaan feel bloated and even unnecessary. Trapped by the requirements of formula filmmaking, Toofaan is more gas than a raging storm that it was intended to be... full review

Dear Meetu, a very good comprehensive review. Yes, it's an old wine in new bottle by veterans of 90s era... Film is a bit longish and dull at times. Songs aren't catchy or needed... Acting is top class.. But there's nothing that lifts the script from its routine monotony. That's why it's okay watch when we've already paid our subscription.

Raj has given this movie a So-So(If within 120 minutes without songs then "Good"). Raj has posted 99 comments and has rated 67 movies. See Raj's page for more details.
meeta