Not only is it a terrible sequel, but it also fails as a standalone film.

If you happened to have come across last year’s teenage love story Timepass, you pretty much know what to expect in its follow-up. If you revere it already, you are sure to fall in love once again, whatever be the rating. But if you enjoyed the original and are now anticipating narrative extravaganza, you have good reason to shun the latest offering. As is the case with every sequel, comparisons with the first film seem highly inevitable. But as I said, it’s hardly a matter of concern for this film’s target audience. Unlike the first one, Timepass 2 literally stays true to its name and is sadly intended to do only that much.

This film doesn’t believe in complexities or rationalities. All that counts here is quick one-liners at the expense of emotional connect. This is the single largest factor that differentiates the two films. Never-ending humour is indeed a trump card in Timepass. But it is the impressive script that embellishes the wittiness, paying rich dividends. The characters’ candour represses their implausible behaviour. Though it’s unfair to trash something merely based on its past successes, Timepass 2 doesn’t even excel as a standalone film. And this has nothing to do with the pre-release hype surrounding it.

The pressure on Ravi Jadhav to match (if not outdo) the charm of Timepass is understandably nerve-wracking. But this cannot justify his motives to play safe this time. The open-ended nature of the love story between Dagadu (Prathmesh Parab) and Prajakta (Ketaki Mategoankar) in Timepass gives birth to Timepass 2. After passage of years, Priyadarshan Jadhav now essays Dagadu, while Priya Bapat plays Prajakta. However, Jadhav doesn’t want you to forget the erstwhile cast. The younger actors drop in at crucial junctures to appease you.This move works until it backfires. It’s hard to come to terms with the illusion of Parab compelling Priyadarshan to make decisive moves every now and then. Let alone the logic or lack thereof, it gets annoying subsequently.They weave rib-tickling words around a shallow framework and superficial conflicts, expecting to (re)create magic. 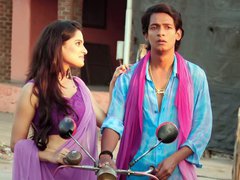 Logical discontinuity, unconvincing explanations and informative dialogue are all over the place. But the truth is, nobody bothers. Jadhav himself is as negligent as its mere-fun-seeking audience. Each film’s treatment differs subject to its content. But it’s appalling to see the man, known for his intellectual flicks, now spoon-feeding concepts/events mechanically. Albeit it’s hard to escape his midas touch for a bit in Timepass 2, it is easily forgettable.

Manmeet Pem’s younger Balbharti is by far the most adoring character in Timepass. And it had many strong characters to root for. So, it gets really tough for Timepass 2 to pull that charisma off even in older avatars. To my dismay, the sequel doesn’t have even one such character. Sandeep Pathak’s Malaria, to a certain level, leaves you in splits more often with his actions than words. But the magic is still missing.

About an adolescent love, Timepass stands as a mature effort. It’s enjoyable regardless of its weaknesses. Timepass 2 is more or less an immature and outdated attempt at grown-up love. Sure, it will set new Box Office records. But is money the only measure of quality? I hope it’s not.