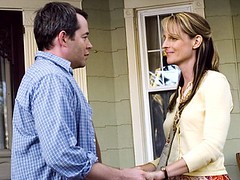 Then She Found Me

Then She Found Me is almost like a therapy film for someone who doesn’t like growing up – or change. Through subtle humour and fast-paced plot changes, it challenges your idea of stability and chaos and gears you up to face the worst. A must-watch for someone who needs motivation to just get up!

We all have aspirations of how to deal with a mid-life crisis: Red/yellow sport cars, travel to an exotic location and the works. Maybe change career paths; follow our dreams – anything that works. Shah Rukh Khan does it, with every “guest appearance” or “endorsement” while Kevin Spacey’s character in American Beauty is a benchmark of what we shouldn’t do. What do you do however, when you face an intense identity crisis at 40?

Through the confusions and the chaos, Miss Epner (Hunt) dabbles with a mother, and a rather loud and famous one at that, a spineless ex-husband, a new relationship and a life-changing identity crisis.

Then She Found Me is one of those films where nothing really ground breaking happens, but you get hooked onto the story as it unfolds one stupendously crazy incident after another.

Just when you get used to shocking revelations like finding a mother at 40 and getting dumped when least expected, a voice-over trails you through a much larger catastrophe.

Funnily enough, you’re never made to sit and grieve anything. The entire tone of the film can be watered down to one sentence – “Okay Life, how much worse can this get?” And there’s never a boundary to that!

One after another, we are made to spiral down incident after incident of turbulent discoveries and funny connections, until we reach a point where it all binds to give sense of closure. Closure is the ideal end to a film like this – because it satiates you, as viewer after taking a crazy adventure ride that the film is.

The look and feel of Then She Found Me is contemporary, satirical and subtly funny in a way that makes your Laugh Out Loud in your head, but never burst out laughing for real. It’s a different brand of funny, coupled with a smooth background score and interesting, intercutting cinematography – all which makes sense when coupled with the scene in question.

The DVD of Then She Found Me isn’t a goldmine though, with just a few trailers, extended scenes and a interview with Helen Hunt on her first time as a director and her experience of writing the film. The interview is a decent watch while Hunt talks about her choice of this script for her debut film, and how it uses understated humour to define a state of mind.

Then She Found Me is an underdog. We all want a raving DVD collection with films we can boast about – if the films are unheard of, even better. This film isn’t something you can boast about, or even use as a conversation catalyst in intellectual discussion about art & cinema but you’ll finish the film with a genuine smile on your face hoping you have the nerve to live through your mid-life crisis in a similar manner.

Then She Found Me - Cast, crew, links