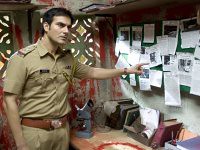 All the build-up is justified with an interesting result. Unfortunately, we get 2-3 extra minutes at each twist to predict the next move. And this mars what otherwise could have been a superb thriller.

An unsolved mystery in real life has so many potential climaxes. Our imagination is the only limitation. Writer-director Manish Gupta's imagination brings us his plausible solution to the unresolved case of the stoneman murders in the 80s and it's an interesting one too. Only that it has hiccups in the form of drama. That slight over-dramatization that gives the audience a couple minutes to think and makes the shocker twist into an "I knew it!" victory moment for them.

In general, every time a protagonist finds himself in a corner with very little room to escape it makes us want to root for him even harder. And you sense the claustrophobia when doors slowly start closing in on Sanjay (Kay Kay Menon). Fingers being pointed at him, an unhappy wife, a senior who might just be using him as a means to an end, a colleague who's out to get him, a junior who's not completely in-sync with him - all stars aligning themselves just right to make life miserable for him.

The writing is actually reasonably gripping. It has its twists, turns, and re-twists that fit into the short run-time. But it needs more meat for the other characters. The wife, the colleague - could have been delved more into. We are allowed nowhere close to the killer's psyche. Then again, that might not be the point of the movie. Also the language used is extremely inconsistent and distracting. A character who speaks Hindi with a very heavy Bombay dialect suddenly spouts a phrase in chaste Hindi.

Most of the dialogue delivery is left in Kay Kay's safe hands and usually that's a good thing. He starts out as his usual exceptional self. It's a delight to see his composure change from attentive-submissive when he's with his boss to bossy-smug when ordering around his subordinates. And then suddenly it gets weird. He delivers his lines in a staged way which I just couldn't associate with him - the distant look in the eyes while mouthing some really bad lines.

Rukhsar (Sanjay's wife) looks very out-of-place all through. Her attire - the way the cotton sari is draped and the way she's carrying it don't go together at all. Her character's sub-plot has no connection with the rest of the story. I have this creeping suspicion that she's here because she was the only one ready to shed her clothes for that one unnecessary scene and fit the budget!!

You'd think that it's a thriller and has given itself only 95 minutes so they'd be in a rush. But, na-ah...the camera takes its time to scan the room and the characters. Usually, I enjoy slow camerawork, it gives me time to soak in the atmosphere but here it is very random and rather directionless. Not to mention, the typical thriller-violin-shrieking in the background.

I'd have voted for a tighter screenplay. And since it's a short film in the first place, maybe a few minutes to delve into the psyche of the other characters would have made my experience more complete.

Thumbs up, by Abhijeet Mhamunkar, Buzz18 : ...Debutante director Manish Gupta (writer of Sarkar) has made a gripping thriller that keeps you on the edge throughout its one hour 40 minutes runtime.... full review

Thumbs up, by Gaurav Malani, indiatimes : ... Despite the liberties and loopholes, the film succeeds considerably in living up to its suspense-thriller genre.... full review

Thumbs up, by Aakar Patel, indya.com : ...The moments of tension in the movie are well handled and in fact quite scary.... full review

Thumbs up, Movie Talkies : ...THE STONEMAN MURDERS is a whodunit that delivers high on the suspense quotient, keeping you glued to your seats through its gripping narrative.... full review

Thumbs up, by Anupama Chopra, NDTV : ...The Stoneman Murders is undone by a sagging script and a feeble conclusion.... full review

Thumbs up, by Nithya Ramani, Rediff : ...The story keeps you on the edge of your seat, occasionally sending a chill down your spine... full review

So-So, by Noyon Jyoti Parasara, AOL INDIA : ...The Stoneman Murders is once again an out and out Kay Kay film. He is good as ever. Arbaaz Khan and Vikram Gokhale are decent.... full review

So-So, by Sanjay Ram, Business of Cinema : ...A great story, told not so well is what the film is. It packs in the thrills but just when you reach the zenith you are met with blandness.... full review

So-So, by Taran Adarsh, IndiaFM : ...THE STONEMAN MURDERS is an engrossing fare that would appeal more to the multiplex junta of big centres.... full review

So-So, by Subhash K Jha, Now Running.com : ...Kay Kay Menon with his strong, wry unsmiling presence brings grit to the feeble drama. Arbaaz Khan as his adversary in the police department has nothing much to do... full review

So-So, by Nikhat Kazmi, Times of India : ...Mumbai and its alleys which turn sinister by night, tower prominently as the perfect backdrop of a film which boast of some high-tension moments.... full review

So-So, by TheThirdMan, Upper Stall : ...Technically, the DI leads to a very synthetic looking feel to the film. The film fails to utilize the beauty of Pollachi as effectively as it could.... full review

So-So, Zee News : ...But the film gets inventive towards the end. It seeks out a neat end to the gruesome murders involving intrigue and Satanism within the police force.... full review

Thumbs down, by Khalid Mohamed, Hindustan Times : ...This film looks too much like an assembly-line product.... full review

A killer is at large. And he strikes again. And again. And a few more times. What does police officer, Sanjay do to get to this man?

@lost in confusion I'd think so, because I think I saw it playing on TV/Tata showcase or something.

ps. sorry for the delay in reply to this one, for some reason set-up for comments by e-mail isn't working, so I've missed quite a few comments on earlier films.