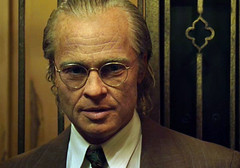 The Curious Case of Benjamin Button

A satisfying drama with an unusual premise that allows the viewer to reflect on life, love, and loss.

David Fincher is known for his films that tend to be ruminative, bleak inquiries into the human condition, as seen through the eyes of the chief protagonist. His earlier Seven and Fight Club both starred Brad Pitt and were extremely grim. Here he teams up with writer Eric Roth (of Forrest Gump fame) and Brad Pitt for The Curious Case of Benjamin Button and gives us a film which is in parts hopeful and uplifting, with respect to its take on life and living.

One essential feature of being human is our capacity to reflect on our lives; we try hard to make some sense out of all the chaos that we experience. We are bound by Time; we are born young and are inexorably doomed to age, and die. That is something we cannot defeat. One tends to visualize life as a journey; a journey where we acquire companions and lose them, knowing fully well that there would come a time when we would be lost to others too. But what if it all happened in reverse? Just supposing that one is born old; then the journey would start with old age and end with baby hood. This would provide us with a completely different perspective; we would be born looking at the world with eyes that are old and rheumy and die in the cradle. This is the angle that the film adopts, and the director and writer use this outlook to fashion a story about the chief character’s (Benjamin Button) life.

The similarities with Forrest Gump are immediately obvious; Benjamin is born with a debilitating physical condition, there is a woman who remains the love of his life, he moves through well defined time periods in American History, and tries to make sense of it all and in the process gives some pithy sayings about life. The key difference is that in Forrest Gump, History was one of the main characters, Gump existed as a prop for History; here History is given short shrift (though we are constantly aware of it as an addendum to the frame). The movie is not that cheesy either (remember that line about life and a box of chocolates in Forrest Gump?), it instead comes across as a rather detailed portrait of Benjamin Button.

The movie has three stages: Benjamin’s childhood, his coming of age as he leaves home to learn a trade, and his eventual return and death. Brad Pitt is Benjamin Button and his portrayal is satisfactory Special effects technologies are employed to transform Brad Pitt's physical appearance at various stages in the film. The special effects are very well done, including the makeup for the face and skin, that blend completely into the frame. But Pitt's acting somehow falls short; as a child Pitt does nothing that would demonstrate the limitations that his body has with respect to his mental age. We see no glimpses of mischief, nor of childlike curiosity barring a couple of fleeting scenes. But that is it, and somehow this tremendous opportunity to reflect on how a young child (mentally) trapped in an old and aged body would respond is completely lost. Benjamin Button’s character also comes across as too goody goody, there is nary a bad bone in his body and he is constantly polite and clear of heart. That is something difficult to digest, and especially with his physical condition. We see no signs of frustration, irritation, or anger; he is as sweet as an angel throughout. Contrast this with Daniel Day Lewis’s performance in My Left foot for example.

The supporting cast is tremendous. Taraji Henson as Queenie is very good and so is Tilda Swinton as Elizabeth Abott. The portrayal of the tugboat captain, Captain Mike, who considers himself an artist, by Jared Harris is brilliant. Cate Blanchett is adequate throughout; she looks particularly radiant when she plays the younger Daisy. David Fincher maintains a steady tempo and sticks to old fashioned story telling; no sudden shifts in time, no fast cuts, and no handheld cameras either. The tale unfolds at a leisurely pace, and is packed with incidents, and hence the pace does not flag. The period feel is beautifully recreated; the opening footage of the clock maker who makes a clock which runs in reverse, the scenes of Benjamin’s childhood in the old age home, the meetings with Elizabeth Abbott in the lobby of the Russian hotel, all look and feel natural.

The movie seems to suggest a subversive message – that old age is not all that bad and that growing younger is something to be feared and avoided. This is in complete contrast to the youth obsessed consumer culture that is prevalent today. The movie also possibly points out that both old age and childhood are nearly the same – something that the Bard of Avon also pointed quite some centuries ago.

This is a film which flows gently; there are no sudden surprises, no fortuitous acts of God either. Overall the film is rock solid without being outstanding, and is definitely for those who would want to think about their lives in the dark comfort of a theatre.

Benjamin Button is born old. Abandoned by his father he is brought up by an African American lady and grows younger as he enters adulthood.

I really liked the movie...It was really different...
Thanks for the review...