Maybe, just maybe, the premise is okay. The details, though, are either convenient, patronising or both. And the execution is tacky, slapsticky and cringe-inducing.

A near-death experience brings perspective. Believable. The perspective coming about in a predictable manner, given that a Computer Graphic assistant to God is in the picture. Yawn-inducing. A film-maker teaching a human being how to be a decent person. Acceptable. The writers rewarding him for being just a decent person. Disturbingly low standards.

The film’s inept writing stares glaringly at you within the first few minutes. Ayaan Kapoor (Siddharth Malhotra), a shamelessly corrupt real estate agent, seems to be a rather unresourceful businessman. He is denied loans and is unable to convert his old currency notes to the new one after India’s demonetisation in 2016. The exhibition of his misfortune is predictable and caricaturised. It doesn’t help that his man-child behaviour is contrasted against his wife’s strikingly kind and generous nature. You can tell already that Thank God will exaggerate to make a point. And well, unfortunately it doesn’t disappoint.

As it moves along in its plot, Thank God becomes a lecture series of civic sense and moral education, with each episode taking on one or the other social or personal behaviourial aspect ranging from anger management and jealousy to parental neglect and meaning of religion. In its telling, there are a couple of instances when you feel, “oh! well-thought!” but these are too few and very far between.

The rest is either too obvious or is making too much of an effort to outsmart Ayaan’s character and through him, the audience. The effort fails and gives the audience too much time to guess what’s to come.

Over and above this shabbiness are problematic takes such as the support to blind faith in things like vastu shastra, false equivalences like the one between laughing at a joke and crying about a misfortune, treating devotion and donations as mutually exclusive, and the teaching of lessons by putting a person in a corner. This overwhelmingly overshadows the couple of worthy arguments the film wants to make about gender equality and misunderstanding the intent of faith. 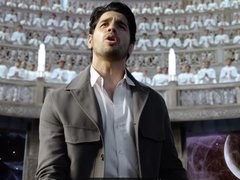 When there is so much wanting in the content, the other technical aspects of the film matter little. And it is not like the script demanded any great shakes from the actors. Small mercies are that they didn’t make Thank God even more unbearable. The production can be thought of as a well-done for live performances. But for a film, it comes across as make-do, especially one that stars some A-listers—so it’s not like they were on a tight budget. Thank God’s narration is too focussed on the end and cares little about the means. Thank God’s lessons, a half-decent person won’t need, and a not-decent person won’t heed.

So-So, by Russel D'Silva, Bollywood Life : ...Thank God may be no PK, OMG or Taqdeerwala among the pantheon of religious comedies, but does enough to sparkle this Diwali, especially with the second half packing a real emotional punch balanced with subtle humour. Ajay Devgn shines like only he can while both Sidharth Malhotra and Rakul Preet Singh are adequately sufficient. All in all, a good watch with your family this festival weekend. I'm going with 3.5 out of 5 stars.... full review

So-So, by Devesh Sharma, Filmfare : ...Watch Thank God for its light-hearted moments. Then go home and watch the classic It's A Wonderful Life (1946), the granddaddy of all such films involving alternate lives.... full review

So-So, by Madhuri V, Filmi Beat : ...Barring to the viral 'Manike' (a huge credit goes to Nora Fatehi's sultry dance moves) and the reworked version of 'Dil De Diya Hai,' none of the songs from Thank God are loopworthy.... full review

So-So, by Rohit Bhatnagar, Free Press Journal : ...Thank God is a so-called family entertainer that is stuck in the '90s. Watch it if you are okay to expect a sob tale rather than a pure comedy.... full review

So-So, by Sameer Ahire, Movie Talkies : ...Thank God it’s not a performance-oriented film, so let’s not blame the actors here. Ajay Devgn is one of the finest actors we have in the industry, but this role of CG isn’t suitable for the actor in him. But the superstar Ajay Devgn can have fun like this. Yes, it’s a funny role with a lot of brain and emotions attached to it. You expect CG to be an intelligent and philosophical person, and Ajay is that person here, but he comes with a light-hearted approach rather than some heavy stuff. Sidharth Malhotra appears irritating in his first scene, as if he is impersonating a child, but after a while, you grow to like him. It gets better with each passing scene, and then Sid shows a mature actor in him in the climax scene. Rakul Preet‘s role was quite ordinary, but it has many shades. Rakul had Attack, Runway 34 (the most challenging role for her), Cuttputtli and Doctor G this year, but Thank God was the easiest role amongst them. Nora Fatehi looks super hot in her item number and the supporting unit of Urmila Kothare, Seema Pahwa and Sumit Gulati is very okay.... full review

So-So, by Sonil Dedhia, News18.com : ...On the whole, Thank God is an entertainer with its share of funny moments. If you are not looking for wisdom and rationale in a light-hearted entertainer, then this movie is definitely for you.... full review

So-So, by Pratikshya Mishra, The Quint : ...Writers Madhur Sharma and Aakash Kaushik create a story that seems appropriately linear till it becomes predictable. Thank God isn’t a film of logic or science, it is purely based on emotion and pathos and in a story like that, predictability can have quite the adverse effect.... full review

So-So, by Dhaval Roy, Times of India : ...The story is stuck in the 90s and oversimplified but the movie makes for an easy watch. It might find favour with audiences who want a clean entertainer, as the film has a message or two about moving on about tribulations, being humane and the importance of one’s family.... full review

Thumbs down, by L. Ravichander, Deccan Chronicle : ...The game in white ball and black ball tempts you to wonder if it is not the singular. However one will stop short of that and leave the white and black ball game to the dubious idea of the film. Give it a miss.... full review

Thumbs down, by Rahul Desai, Film Companion : ...My opinion about this film will never change. Does that imply I’ll never grow old? Is Thank God that rare drug of agelessness? Is this my afterlife? Questions, questions.... full review

Thumbs down, by Shubra Gupta, indian express : ...The official remake of Norwegian film ‘Sorte Kugler’, ‘Thank God’ marks Indra Kumar’s return to Bollywood after a sizeable gap. Best known for his musical rom coms with Bollywood stars acting as overgrown delinquents (‘Dil’), and the raunchy ‘Masti’ and ‘Dhamaal’ franchises stuffed with oversexed men and double-meaning dialogues, his style is still same-old, and it does nothing for a fantasy which needed to be light on its feet.... full review

Thumbs down, by Umesh Punwani, koimoi : ...All said and done, Thank God had the potential to be much more than what it is today. The imbalance between multiple genres dents the fun-watching experience it should’ve ideally been.... full review

Thumbs down, by Saibal Chatterjee, NDTV : ...The film has no such chance. Its contrived arc and cliched plot devices do not generate any empathy for the plight of the hero and his family, which includes his mother (Seema Pahwa), another woman in his life who has faced a lifetime of neglect.... full review

Thumbs down, by Avinash Lohana, Pinkvilla : ...Overall, Thank God had potential with a unique idea and sincere performances at its helm, but it is the weak writing that makes it a lacklustre affair.... full review

Thumbs down, by Namrata Thakker, Rediff : ...Sidharth as Ayaan is pretty decent till the interval. His comic timing isn't the best, but he manages to tickle your funny bone more than a few times. Despite his towering presence, Ajay Devgn's role doesn't make an impact. Rakul Singh is wasted as is Seema Pahwa. While Rakul plays Sid's wife, Seema is shown as his mother. Nora Fatehi's dance number is the only good thing in the second half which is unnecessarily stretched out with too much melodrama and rona-dhona.... full review

Thumbs down, by Nandini Ramnath, Scroll.in : ...The humour of the original film has been replaced by excessive verbosity and finger-wagging. The film even accommodates a Nora Fatehi dance number and a sacrificing mother (Seema Pahwa).... full review

Thumbs down, by RAM VENKAT SRIKAR, the new Indian Express : ...In Thank God, a tragedy that strikes on a fateful Diwali is quite integral to the story and the character arc of the protagonist. For a film that was released on Diwali, it is, unfortunately, quite ironic.... full review