I don't know if it is funny, I watched it thrice and I could barely make out what was going on, beyond the basic plot. And, it doesn't look like I will find any of the loud, slapsticky comedy funny. However, there is hope because – Tere Bin Laden*. And there is trepidation because – The Shaukeens.

I'd be happy if Tere Bin Laden – Dead Or Alive hits it even between the two.

What if a Osama look-alike is needed and found by both the US and some Mujahideen? Such an interesting premise for a story. And you have the intention to make it comical – a spoof on terrorism, war, international politics, film industries and more. As engaging as that sounds, Tere Bin Laden – Dead or Alive gets into repetitive situations and ends up making 110 minutes seem way longer than they are.

From the beginning the movie is loud and doesn't try to mask the fact that it is aiming for slapstick. Even so, it is acceptable because the satire is amusing. Unfortunately, the well of satire has little water and dries up soon. What is left then is the ridiculous situation that our characters have found themselves in.

Ridiculous doesn't always equal funny though. You could laugh at how silly all of it is. But, each of those laughs is wiped out by stretching the scene way longer than its viable life. The actors can only do so much. They are asked to be loud and loud they are. Of the lot, Pradhuman Singh stays as restrained as it can possibly be making his character quite adorable, as it is meant to be. Interestingly, Ali Zafar is annoyingly insuferable as he is meant to be too. Manish Paul overplays the comedy but again it is difficult to comment on his over-acting without blaming the writer-director. 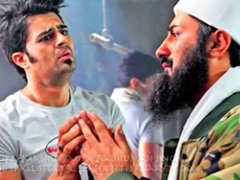 With little in the story beyond the basic premise, Tere Bin Laden Dead or Alive ends up just killing its potential to be lively. See, I am bored enough to do bad puns too. Better stop here.

So-So, by Anna MM Vetticad, annavetticadgoes2themovies : ...If you must watch this film, watch it for Sikandar and Iman. If Sikandar’s poor visibility in Bollywood is due to a lack of trying, then it is his choice, but if it is due to a lack of roles, then the loss is totally ours. As for Iman…how I wish more Bollywood writers would write scripts that require the casting of an African American actor. He and Sikandar are a hoot and the only reason why Tere Bin Laden – Dead or Alive is not a complete write-off. ... full review

So-So, by Bobby Sing, Bobby Talks Cinema.com : ...Overall, where many might not feel thoroughly entertained sitting in the theater post buying a costly multiplex ticket, many might consider it entertaining enough while watching on a TV channel in the coming months without making any extra effort or expenditure. So do wait for the same and catch it later especially for Sikander Kher. ... full review

So-So, by Subhash K Jha, Bolly Spice : ...I wish I could say, go have a blast, to stay in the mood of the Osama-Obama war to finish. But really all I can say is, not again please? Thank you. ... full review

So-So, Bollywood Hungama : ...On the whole, TERE BIN LADEN DEAD OR ALIVE doesn't live up to the first part. It offers you patchy entertainment. At the ticket window it will not enjoy an overwhelming word of mouth. If you don't have anything else to do, you can check it out else wait for the satellite premiere. ... full review

So-So, by Sreeju Sudhakaran, Bollywood Life : ...Watch it for Manish Paul. He is definitely worth more than the price of the admission ticket. ... full review

So-So, by Mehul S Thakkar, Deccan Chronicle : ...If you have loved the first film, this one doesn't live up to its expectations. But looking at the performances of different characters which are entertaining, it isn't such a dragging affair either. ... full review

So-So, by Yatharth Chauhan , Desi Martini : ...Tere Bin Laden: Dead or Alive could best be given a chance if you have a low threshold for comedy. The films that offer so much potential but end up with bigtime displeasure are painful, trust me! ... full review

So-So, by Devesh Sharma, Filmfare : ...We don’t make broad comedies which border on the absurd and it’s good of Abhishek Sharma to attempt a political satire that does tickle the ivories. A little more attention to editing and tauter screenplay would have made it a better film for sure… ... full review

So-So, by Rohit Vats, Hindustan Times : ...You can still watch Tere Bin Laden: Dead or alive, but it won’t give you the same punch as the original. Keep your expectations low and you may come out of the movie hall laughing. ... full review

So-So, Indicine : ...Conclusion: Tere Bin Laden 2 could have become a good film, or even a great film but is content with just being a decent film. The idea which germinated in the director’s head was a really cool one but it doesn’t reach its zenith, like it should have. It is a missed opportunity because the humour quotient is lower than the first one and the subtle satire doesn’t come through very cleanly. If you’re content with your doses of humour in intervals, then this movie should be right up your alley. ... full review

So-So, by shubha Shetty-Saha, MiD DAY : ...The film belongs to Kher whose comic timing is a delightful revelation. As a CIA agent and as the potbellied Hollywood producer, he is fantastic. Hope to see him in more such fun roles, which he clearly seems to be enjoying doing as much as we enjoyed watching him.... full review

So-So, by Jaidev Hemmady, Movie Talkies : ...In conclusion, Tere Bin Laden-Dead Or Alive is not a bad watch if you don't mind a dash of silliness with your comedy… ... full review

So-So, by Namrata Joshi, The Hindu : ...Silly works in TBL 2 because the film doesn’t take itself too seriously. Audiences are advised not to take it too seriously either. ... full review

So-So, by Mohar Basu, Times of India : ...What this oversimplistic film lacks, is sharp writing. It is entertaining in parts but once the curse of the second hour strikes, the wicked streak takes a backseat. Tere Bin Laden : Dead or Alive, misses the spunk of its prequel. ... full review

Thumbs down, by Tushar P. Joshi, DNA : ...If you are a Manish Paul fan then Tere Bin Laden: Dead or Alive won't disappoint, otherwise, you are better off revisiting the first part. ... full review

Thumbs down, Free Press Journal : ...When a wacky and wild absurdist comedy is delivered with a degree of control, it can work wonders. But Tere Bin Laden – Dead or Alive has none of the spark of the original. It works on the principle that a madcap caper can get away simply by pulling out the stops. The end result is a riot all right, but it is singularly without the laughs. ... full review

Thumbs down, by Zehra Abbas , fullhyd.com : ...Of course, all is not doom and gloom, and the film has some funny moments that got laughs. But, they don't come fast enough and they don't come often enough. ... full review

Thumbs down, by Martin D'Souza, Glamsham.com : ...Sugandha Garg, Piyush Mishra and Rahul Singh are the other actors who catch the eye. There's not much on offer here as entertainment.... full review

Thumbs down, by Suhani Singh, india today : ...A few bright ideas such as terrorists playing landmine jump, bomb relay and enjoying a retrospective of Osama films draw a chuckle. But that's as close to a laugh you will get in this comedy.... full review

Thumbs down, by Saibal Chatterjee, NDTV : ...Tere Bin Laden: Dead or Alive is best avoided unless a bunch of characters running around in circles is one's idea of entertainment. ... full review

Thumbs down, by Namrata Joshi, Outlook India : ...The first half has stretches of dullness and things energise post-interval. You invariably end up comparing Tere Bin Laden to Jaane Bhi Do Yaaron, wishing it could have let go and be as sublimely silly and spontaneously balmy as jbdy. A mad film that falls short of being truly madcap.... full review

Thumbs down, by Sukanya Verma, Rediff : ...And, if it aspires to be a satire, there’s little bite or ambition in its pedestrian approach and trivial resolutions. ... full review

Thumbs down, Zee News : ...Overall 'Tere Bin Laden: Dead or Alive' comes across as a flimsy spoof that has bitten off much more than it can chew and digest. ... full review

2BBohochic: 2B! Bohochic - Tere Bin Laden – Dead or Alive:: A yet another comedy movie to lighten the… https://t.co/VyLvpp9B7E

Atif_Paracha: Movie review: ‘Tere Bin Laden: Dead Or Alive’: This film is a singularly unfunny farce that doesn’t even retain the honesty and goofi...