Sully is also what you get when a screenplay wrought in constant simmering tension meets a near flawless re-staging and recreation of the ‘miracle on the Hudson' - the epithet that has since been given to the events that unfolded, on an otherwise pedestrian wintry New York morning in ’09, aboard US Airways flight 1549.

At a run-time of 96 minutes, there isn’t an amber of a moment that could have been sliced or spliced. You have a frequent, unmistakable feeling of literally being on that near ill-fated flight. The PTSD (Post Traumatic Stress Disorder) felt by the crew hits home too at a visceral level. 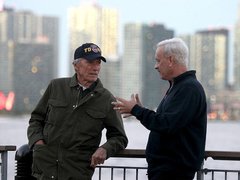 Also remarkable is the fact that for an event that lasted all of 208 seconds end- to-end, the revealing of what went before and especially what came after lends the film a thriller garb. It is as riveting as it is stirring.

As Captain Sullenberger, Hanks is utterly believable and is everything that you expect him to be – self-effacing, guilt-ridden, conflicted, noble – and his natural restraint offsets the mildly hagiographic tint that Eastwood embellishes on his protagonist.

For Hanks aficionados, there is much to look forward to – the gravitas, the grimace and yes, the grace. Aaron Eckhart, as first officer Jeffrey Skiles, provides timely comic relief. He has a palpable chemistry with Hanks.

In the aftermath of the miracle, the real life Sullenberger famously said that he had made many small, regular deposits in the bank of experience, education and training over 40 years. And that on 15th of January’09, the balance was enough for him to make one very large withdrawal. The same, I wonder, can be said of both Hanks and Eastwood in the light of their combined, often affecting, oeuvre on display.