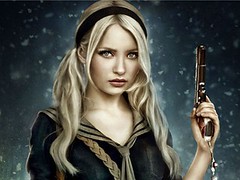 Zack Snyder still reigns supreme as the father of Hollywood when it comes to turning graphic novels into films (300, Watchmen). He repeats that feat as an adaptation in Sucker Punch. But despite being a treat audio-visually, thanks to its technical wizardry, it offers little in the form of logic or a good story. It’s a forgettable film, but I suggest you watch it on the big screen and then (forgive and) forget, than not watching it at all, or waiting for the DVD.

I think Zack Snyder makes a film, by reversing the traditional flow-chart - he first does post-production planning, followed by the shooting. At the end, he figures how to perfect that script from the graphic novel and identifies a story somewhere.

Understandably, actors on his sets must be rarely challenged - all those cool and stylish effects, digital re-touching, mixing that so are typical of his films, that performances would be so boring. Imagine shooting bullets at imaginary objects, piercing the sword into non-existent creatures, being suspended from wires and surrounded by the chroma screen, all the time.

Style over substance, therefore, is a trait of Snyder’s films.

That still works to his advantage, since he never chooses to adapt Shakespeare on screen. Comics - a.k.a graphic novels - have rarely tried being about ‘substance’. Which is why, he’s possibly the best man alive, who can bring a graphic novel alive on screen. Sucker Punch confirms it - his command over technique and craft, such as sound design and mixing, cinematography, action choreography, editing, visual effects, make-up, is impeccable.

Which is why, there’s so much visual and audio stimuli for a viewer to experience this film on the big screen. And it is therefore that I recommend, that if you want to form an honest opinion about this film - no matter how bad - you’ve got to head to your nearest multiplex. It would be criminal to experience Sucker Punch on DVD, or any screen shorter than the big screen.

Sucker Punch isn’t half as good as his last outing, 300, which achieved cult following despite being panned by critics. The adaptation isn’t bad, it’s just that the story falls flat. Moreover, this Charlie’s Angels-meets-Matrix, fantasy action thriller has an overdose of blondes. The storyline is simple - the lead protagonist, helpless Babydoll (Emily Browning) is sent to a mental asylum by her evil stepfather where she retreats into a fantasy-filled escape plan, by finding a set of clues.

Since it’s HER fantasy, she is magically rewarded with samurai-like sword fighting skills as well as powers to float around at her own choice of gravitational force, before slaughtering dragons and other video-game essentials. Joining her on this escape mission, are a few other pretty young things (PYTs) - Sweet Pea (Abby Cornish), Rocket (Jena Malone), Blondie (Vanessa Hudgens) and Amber (Jamie Chung).

The plot defies logic and any bit of thought or morals that the script tries to pontificate is absolutely absurd and I didn’t get any of it. You shouldn’t try to either - if you’re looking for a take-away from a film, bad idea.

I however did enjoy Snyder’s treatment of action sequences, the special effects and all the jazz that has come to characterise his films - the rich color tones, soundtrack laden with rock music, the slow motion fight sequences and the gore. The soundtrack, in fact does immense charity to helping improve the viewing experience.

Amongst the women, Jena Malone (who played Carine McCandless in Into The Wild) and Abby Cornish are good, but Emily Browning proves to be a major disappointment. I got introduced to her - especially her sexy pout - in Lemony Snickett’s A Series of Unfortunate Events, and although she fires bullets and punches the baddies pretty well, that blonde hairdo and ponytails makes her appear too dumb. Oscar Isaac’s performance as Blue Jones, the evil pimp to all these women, is noteworthy.

Sucker Punch falls into that category of films which advise you to leave your brains at home. Simple as it may sound as a suggestion, it is an incredibly difficult anatomical feat to pull off. Our brains and heart better be together. Why not then, Mr Scriptwriter, do you do us a favour by working a little harder.