wogma rating: Even the keen, wait for it to come on TV/online (?) - That too only if you absolutely love watching hip-hop dance performances.

An excuse to choreograph a whole load of dances, though it seemed like one long dance broken by bits of story around empathy and international integration.

It is obvious what they are trying to do here—merging the dance-competition genre with the sports-drama genre, with a splash of India-Pakistan thrown in. At this itself, the concepts seem forced on to each other. Pile on a layer of contrived rivalry that we know is predictably going to turn into friendship and you are most likely going to feel played by the set-up. Yes, despite seeing it coming 30 seconds into the trailer.

Here’s hoping the choreography will arrest our attention despite the distracting 3D in the film’s title.

How many hip-hop dance performances can you watch at one go? That is the only question that you need to answer before deciding whether you want to watch Street Dancer. The film actually feels like an urge to keep choreographing these dance performances. And then, of course, you have to have some kind of a story. To the writers’ credit, they do not take the audience totally for granted. But, unfortunately, that is not enough.

Instead we have bad puns, worse jokes, innuendoes, slapstick, and loads of predictability.

Granted, I am far, far away from being any sort of authority on dance, but there are likely many people in the audience are like me. To this untrained eye, the characters harping about being “new” or “different”, was amusing. They all looked more or less the same, with an occasional one-step surprise thrown in. Of course, even the “same” stuff require an extraordinary amount of skill. But, would that justify a movie?

Now, if all the dances had the kind of emotion that two of the pieces had, then stringing dances together to make a movie could be explained. They connected with what was happening in the film and had soul. Other than that, though, the story could have run on one screen while the dances ran on another. And they could have sold as two separate shows.

The story-writing is a notch below ordinary. I couldn’t wrap my head around one relatively important lady character in the story. Her boyfriend makes her angry in her first scene, she inexplicably comes around to help him in the next one, only to be dumped by him later, without getting any explanation...and then she is gone from the film!

Actually, the writing is such that even capable actors like Aparshakti Khurana cannot give it a lift. The rest of the performances don’t really ask much of the actors except more-or-less following a drill. Varun Dhawan moves between being bossy when with friends, holding a grudge when with Shraddha Kapoor, and being full of admiration when with his brother. Shraddha Kapoor uses her eyes to express anger and empathy. The rest of the cast, much like the characters, is quite nondescript. 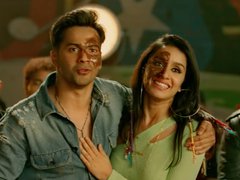 The bothersome bit is that the themes like insecurity of people who are doing well, rivalry for the sake of rivalry, nationalism, and the many shades of ‘othering’ could have been explored even within the parameters of the film. That the film is inspired by the work of an NGO could have been looked into further. Instead, we have bad puns, worse jokes, innuendoes, slapstick, and loads of predictability. Taking it a step further, we have logical gaps and preachy spiels.

But hey, you get to see Prabhu Deva dance.

Yay! Thumbs Up, by rohan