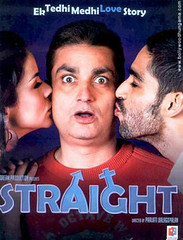 It must be some kind of an art form to not be able to utilize Vinay Pathak's brilliance as an actor. Meanwhile the jokes given to him range from sad to bad.

'It's ok to be gay', 'Imperfections make people real', 'Laughing at yourself loosens you up', 'Loosening up is of utmost importance to live life king-size', and 'A life shouldn't be lived without love' - all tacky lines yet noble thoughts. But when they are given an additional coat of honey with misty eyes, etc they become just too cheesy to digest.

Because of these sloppy lines the very pertinent, contemporary, and important subject at hand seems like a joke. There is no attempt at avoiding clichés. Sure gays are not the butt of jokes but the other elements used are slapsticky. I understand that a subject needs to be treated lightly for it to be approachable. But, this attempt to make gay look normal is done without any sensitivity to the gay guy's pathos. It is a brilliant concept to try and project homophobia without embarrassing homosexuals or stereotyping them. It is also an awesome idea to consider what might happen if this homophobic suspects that he is gay, good grief! For him and sadly for us, as an audience too.

And this entire hullabaloo to what end? Never mind the process of getting there is absolutely irrational, hardly relatable, and very suspiciously real. Also there is no flow in the process of one event leading to another. Characters are either flat or transform too easily. Some gags seem really forced in, for example, it feels like a character is given a particular name only so that a specific pun is used. It is sickening that I couldn't feel anything for a character played by Vinay Pathak.

After movies like Bheja Fry and Dasvidaniya with Vinay Pathak in the lead you sort-of begin to trust his choice of scripts and you know that at the very least they are going to be different. And different, Straight is. Only that different unfortunately doesn't always translate to good or in this case even average. How can any out-of-the-ordinary script do so much injustice to Vinay Pathak that every time he comes on screen, it hurts?

An equally pertinent question would be why Gul Panag spent her energies on a ping-pong ball type of a role. Yes, yes, explanation coming through. Remember, the woman in Hindi cinema from the 80s-90s? How she would be tossed around from Hero number 1 to Hero number 2 or parent or villain and back to Hero number 1? How can an intelligent actor like Gul and her equally intelligent character Renu do this to herself? I just can't stop shaking my head in despair

I wouldn't even know where to begin in describing my dejection with the entire sound design and visuals. Suddenly, they make you feel like you are in a cartoon film. I admit I liked the first time a car in London transitioned into a tempo-truck on an Indian road. But then, the technique was repeated too often with too loud a whoosh to be likable any further.

There are way too many coincidences in the story and we are asked to make way too many assumptions for this film to work. It's very important that sexual orientation become common talk in our lives and movies are the way to begin. But shoddily done films aren't going to cut the deal. And thus another half-decent plot goes more zig-zag than straight and in vain.

So-So, bigoye.com : ...Straight lacks the spark and entertains you in bits and pieces... full review

So-So, by Baradwaj Rangan, Blogical Conclusion, The New Sunday Express : ...Straight plays as if a chef assembled all the right ingredients, tossed them into a pot, and forgot to turn the stove on.... full review

So-So, by Abhishek Mande, Buzz18 : ...The problem with Straight is that even though there are quite a few funny scenes, not all of them blend as seamlessly... full review

So-So, by Subhash K Jha, indiatimes : ...Director Parvati Balagopalan keeps the going light-hearted and most of the time frothy and amiable.... full review

So-So, Movie Talkies : ...The director makes a bold foray into virgin territory, there is a certain stagnation that happens in the plot and the movie seems a tad stretched... full review

Thumbs down, by Aparajita Ghosh, Apun Ka Choice : ...It's neither a gay 'gay' movie nor an entertaining romp... full review

Thumbs down, by Taran Adarsh, IndiaFM : ...It's dry and dreary and goes on and on and on... and ends up being a boring exercise.... full review

Thumbs down, by Goher Iqbal Punn, Radio Sargam : ...There are just a few laughs to entertain you otherwise it’s a boring fiesta.... full review

Thumbs down, by Raja Sen, Rediff : ...There's nothing objectionably bad, and while it starts off promisingly, it finally leaves you with absolutely no reason to recommend it... full review

Thumbs down, by Janhvi Patel, StarBoxOffice : ...What could have been a light hearted fun movie turns out to become a bore that makes you want to groan and cringe.... full review

Pinu Patel (Vinay Pathak) and his family are out to find him a bride. Except that he is not sure. Of whether he wants a bride or not.