Someone thought of putting questions about life, death and beyond in a light, fun movie—that in itself is incredible. And then you have lovely animation to make the experience even richer—enough to excuse the anti-climactic end.

Ever wondered what Abraham Lincoln’s soul must have done after his body expired? Or Mother Teresa’s? Or Carl Jung’s? Soul prompts your imagination and makes you smile. Both at the depiction and at the ingenuity of the thought. The film is sprinkled with such neat creative representations of the writers’ answers to some existential questions.

Even if you think about your spark for a teeny-weeny bit, Soul has accomplished what it set out to do.

If Inside Out is a peek into the inner world, Soul is what comes before and what becomes after. It breaks down complex philosophical questions into digestible, enjoyable chunks. This is all done well enough that you don’t mind the ordinary way in which it ends. Unfortunately, Soul doesn’t end at a high note of some profound insight, nor does it offer a new look at an old insight.

The execution, of what it wants to say before the end, is what makes Soul the fun ride that it is. The “great before” world, the land of new souls, is built in a simple yet elegant format. Much, like the animation figures governing the place. I could look at those stick figures move all day long. That the origin of the new souls isn’t discussed passed me by because I sat there mesmerised by the various components of this world. When it did strike me, I even rationalised the exclusion. Maybe it was left out intentionally to avoid religious controversies. The “great beyond” imagery is given a relatively shorter hand. It is less elaborate, and the afterlife isn’t discussed much either.

To make sense of the two worlds, and its connect with life on earth we have Joe (Jamie Foxx), a soul on earth that doesn’t want its body to be dead and 22 (Tina Fey), a new soul that isn’t enamoured by life in an earthly body. What happens between them is quite predictable, including jabs at materialism. Thankfully though, they skip the love-hate relationship where 22 could potentially make Joe’s life difficult à la the Trapp kids who troubled Maria in The Sound of Music. They take the other typical trope where they help the other to realise what they are missing.

22 is missing its spark because she thinks sparks are over-rated. Joe is missing other things in life because he is too devoted to his spark. While helping each other out, they potentially nudge the viewer to think about their spark. At least the adults. And even if you think about it for a little bit, it has accomplished what it set out to do. 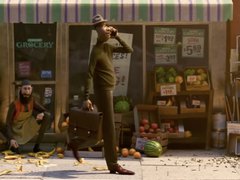 Pixar’s take on established norms, though, is intriguing. Inside Out questioned the insistence on happiness. Soul questions the over-importance give to that singular passion in one’s life. Unfortunately, though, its answer is something we know already, especially when most of us have experienced being locked down in our homes—appreciate the little things in life.

Maybe that’s what Soul is banking on too. That we will not mind its over-simplification, because it is done well. Anyway, an animated film cannot be expected to take a complete look at the biggest questions of life while being funny and creative, in 100 minutes.