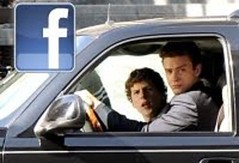 Facebook. That's all the motivation one needs to go and watch this movie. It is the story about the founders of Facebook. And I say 'founders' because it is as much the story of Eduardo Saverin (Andrew Garfield) as it is of Mark Zuckerberg (Jesse Eisenberg). It is the story of how money and success changes the equation between the people behind Facebook. The tagline of the movie couldn't have been more accurate - You don't get to 500 million friends without making a few enemies. We've seen it with Bill Gates and now, we've seen it with Zuckerberg. You can't achieve so much without stepping onto some stones. And Mark sure stepped on plenty. So this movie is about heartbreak, friendship, greed, betrayal, success and of course, Facebook.

With over 500 million users, Facebook is by far, the largest social networking site around. Facebook started in a Harward dorm room in 2003 by Mark Zuckerberg who went on to become the youngest billionaire in the world. The movie uses the lawsuits against Mark, to tell the back-story of how he came to achieve all that he did, pretty much like Slumdog Millionare used the show 'Who wants to become a millionaire' to carry their story forward. And like Slumdog Millionare, here too, the formula worked like a charm. In pieces, it showed the changes in Mark's character from the time he was a neglected undergrad to the time he became a billionaire.

I've grown up reading stories about Bill Gates and how many people he allegedly wronged on his path to success. Its Zuckerberg's time to be under the torch. The movie would leave you with mixed emotions. You'd love Mark for his genius and his passion towards Facebook. At the same time you'd hate him for his cockiness and betrayals. So after the movie, be prepared to jump in to the intense debates of who wronged whom and how much of the movie is fact and how much is fiction. Its good fun, as from ex-Facebook CTOs, employees and founders all are having their say over the matter.

Coming back to the movie, Aaron Sorkin did a great job with the script. It was driven with sharp dialogues that make this movie a fast paced entertainer, and not a documentary. The surprise package for me was Justin Timberlake in the role of Sean Parker. I had little hopes from him, but he pulled off the role pretty nicely. Also, if you don't know the story behind Sean Parker, do read it after watching the movie and you'd love his character more.

All in all, The Social Network, is a brilliant movie to watch, to enjoy, to get inspired and to have a healthy debate with friends. Release date for India couldn't have been timed better with all the heat between Google and Facebook. Also Facebook is rumored to launch its alleged Gmail-killer soon. And we thought Microsoft vs Apple was the epic battle. I won't be surprised to see a sequel a few years down the line about either Facebooks downfall or about it, dominating the world. Time shall tell. The only turn-off for me was all the programmers in the movie were made to talk really fast. They always make the geeks talk fast. Its like an unsaid code. We-don't-talk-that-fast. Wait. May-be-we-do. Dayum!

Yay! Thumbs Up, by Aniket Thakkar

Yay! Thumbs Up, by kay

Yay! Thumbs Up, by Nikunj Modh : Excellent must watch movie

Yay! Thumbs Up, by PK

Yay! Thumbs Up, by Rahul

I watched this movie last night and I must say that I loved it. It moves along at a fast pace, respecting the intelligence of the viewer as events roll along at a fast place. The fast geek talk is actually enjoyable (to me), interspersed as it is with technically accurate terms.

The dialogues are witty and fun. I would say it is a must watch.

Rahul has given this movie a Yay! Thumbs Up. Rahul has posted 87 comments and has rated 16 movies. See Rahul's page for more details.
Like Movies

I just don't know if I trust everything I saw.

kay has given this movie a Yay! Thumbs Up. kay has posted 16 comments and has rated 11 movies. See kay's page for more details.
Aniket Thakkar

@Rahul: Yes, the dialogues were surely the high point of the movie. And I too loved that they managed to keep the technology part right, in the movie. Right down to the part where Mark is always seen using his Vaio and working on a terminal screen.

@Like Movies: The people who have been working for Facebook from the start are also defending Mark, that though he did make some tough calls that others might not approve, he is nothing like the guy they have portrayed him to be. Mark went on to say as much on his comment on the movie that, apart from the kind of clothes he wears they have portrayed nothing the way it is. And I for one believe after every war, the winner has the right to tell the story. But it still, made up for a good movie though.

@W2: I'm sorry to have disappointed you. To me the high points of the movie were the screenplay and the performance of Justin Timberlake as Shaun Parker, which I did mention in the review.

Now, I would have loved to get in details, like the story behind the scene when Shaun asks Mark to go to that meeting in bathrobe. And how they managed to keep the details like the sign of "Use of fireplace, prohibited". But getting into it would give the movie away - which is so against, what WOGMA stands for. So I chose to walk around those corners, and apologize if that resulted in your disappointment.

Watched movie yesterday
Superb excellent work done
Dialogues were excellent and yes the business of CEO which says "I am CEO - Bitch" i loved it!