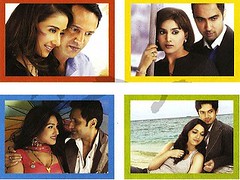 Relationships are hard work. Like that is news to any of us. Sirf tells us this as plainly and boringly as possible. Yet the four couples' stories are woven well together, if only you could get interested in the stories by themselves.

Read more
Director: Rajaatesh Nayyar
Cast: Parvin Dabas, Ranveer Shorey, Kay Kay Menon, Rituparna Sengupta, Sonali Kulkarni, Manisha Koirala, Ankur Khanna, Nauheed Cyrusi
Running time: 140 minutes
Genres: Relationships
More Movie Info
"If only...", "Just this..." and then I'll be happy ever after. Until I come with my next "if only..."

Sirf is based on this very human aspect restricting itself to the man-woman relationship. Now if only, it had been just a little better in its execution. Or maybe it only needed to be just a little shorter.

Sirf uses four couples from different income strata and age groups to display the strife that every couple may go through each phase in a relationship. While the premise is interesting and is held together by a decent enough story, the events are narrated very plainly and the story falls apart in the end. Everyday problems have improbable closures.

Sirf takes a good 40-50 minutes to introduce you to all the eight main characters. It starts out with the problems that could be very similar to ones you and I or someone we know closely has faced. That should mean we identify with the characters, but strangely we don't. It just feels like you are listening to a not-so-close friend ramble on about her problems and you are trying your best to at least look interested. And by the time the stage is set things take unconvincing turns and the story gets out of hands for you to get any more interested than you originally were...not.

And beyond the story, there's nothing much to appreciate. I can understand the lack of choice in terms of actors due to budget constraints. But my complaint is against the director not utilizing what he already had on board. At least four out of the eight actors are known for their performances - Kay Kay Menon, Ranvir Shorey, Sonali Kulkarni, and Parvin Dabas - yet you don't identify or sympathize with any of them. Also, the rest of the cast starts out really well and make you believe you just might be in for a treat, but na-a-ah. In fact, Rituparna Sengupta suddenly turns from a serious character into comic relief. You just don't know where to look when she goes into her most-annoying, supposedly-funny crying bout.

It’s not that the writer/director hasn't tried. He tries in terms of connecting the four stories and he tries to add layers too. For example, I really liked how he tries to show what the younger couple is learning from the more experienced ones. I appreciate the attempt in trying to balance all things good and bad about urbania. But then, that has been done before, it could very well have been left behind. In trying to do too much, nothing is achieved.

That is the main undoing. Sirf doesn't have focus. It doesn't know whether it wants to be serious or have comedy. It doesn't know whether it wants to make its point or have the commercial material fit in somehow (example: misplaced songs which are lackluster so they don't serve that purpose anyway). At the end of the 2-plus hours, I was in two minds too. Whether to spend more time on the film in writing this review or not. Sense of duty beckoned.

I watched this film on satellite TV.

Nay! Thumbs Down, by Telugulyrics.co.in : .